Rudd’s robust language is not the problem 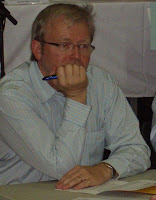 Two weeks ago Kevin Rudd got angry with a group of Labor parliamentarians who were complaining about a drop in salary. They represented a considerable interest group who were unhappy with the latest cut delivered by the government’s much feared “Razor Gang”’. Lower house members were to have their printing allowance cut from $100,000 to $75,000 (a $3,750,000 saving over 150 members) and while senators went down from $16,667 to $12,500 (saving $316, 692 across 76 members). The grand total is a $4 million saving which will go a little to servicing a $58b debt. (photo by Derek Barry)

But the rebels, who mostly represented marginal seats, didn’t see it that way and sent a cross section of aggrieved interests to visit Rudd. In attendance were Don Farrell, Bernie Ripoll, David Feeney and Michael Forshaw from the Party’s right, and Carol Brown, Maria Vamvakinou and Sharryn Jackson from the left. Parliamentary secretary Maxine McKew warned the outcome for the rebels in advance of the meeting. "To anyone who thinks they can't sell a message on $75,000 a year more than many people earn - then they should go out and argue the case on the 7.30 Report tonight.”

Having had a deputy soften them up, Rudd moved in for the kill when they met. He was in no mood to accede to the delegation’s demands and dismissed them with an imperious “I don’t care what you fuckers think”. The Age’s Misha Schubert reported reported the meeting though she coyly translated Rudd’s words as "I don't care what you think, this is going to be done."

The muckraking (but usually well-informed) Andrew Landeryou then reported that his language was much more colourful than in Schubert’s account. Landeryou quotes one attendee who said Rudd’s performance was “Mount Vesuvius meets Tourette’s Syndrome”. Landeryou thought there was nothing wrong with roughing up the troops a bit when they are straying from the cause of righteousness, but said it made for very ugly listening.

Landeryou got the ball rolling, but it would take the Poison Dwarf of Australian journalism to ensure Rudd’s swearing got the widest audience. In his Sunday Herald-Sun column this week Glenn Milne highlighted it as the most important part of his story about the meeting in his first sentence: “KEVIN Rudd has launched another expletive-laden tirade -- this time directed at Labor's factional bosses, including three female MPs,!” Milne’s news value on a two-week old event was based on the dubious facts Rudd’s audience was mixed and were “shocked” despite being “hardened operatives”.

It is always dangerous to rely on Milne’s litany of unnamed sources – he is not averse to making things up. But amid the manufactured outrage, he does add one fact that Senator David Feeney was at the meeting and it was his question which was the straw that broke the camel’s back. After telling all present they were fuckers whose opinion did not count, Rudd singled out Feeney for personal attention telling him "you can get fucked" and asking, "Don't you fucking understand?"

Feeney would not confirm or deny his understanding. But Crikey’s Guy Rundle (link is unfortunately paywalled) says it is credible. Rundle called Feeney the Cartman of Labor politics “bumptious, spherical, and obsessively concerned with the management of his Victorian right-wing microfaction.” Any encounter with Feeney for longer than 15 minutes, he says “would have most people praising the PM’s Christ-like restraint in sticking to verbal abuse and not stabbing him through the eyes with a biro, so as to better mash his frontal lobes.”

Rundle may not think highly of Feeney, but his question is valid: why does a micro-faction running number three Senator needs a huge mail allowance? However this point was lost in the scrabble to report the f-bombs. A quick check of Google News has found 437 stories (and growing) pontificating about Rudd’s coarse language and what it means for society.

Perhaps the attention is richly deserved given the freakish nature of his own micro-media management. And yet for a man given to opaqueness, Rudd made his own views “absolutely clear” on this matter: “that is that these entitlements needed to be cut back, and I make no apology for either the content of my conversation or the robustness with which I expressed my views." He is right, the robustness is fine - the real problem lies elsewhere in Rudd’s use of English.

It is the sentences where he is entirely devoid of meaning we should watch. At the Major Economic Forum earlier this year, a journalist asked him a question whether there would be any climate change action coming out of the meeting. The response was classic Rudd: “It is highly unlikely that anything will emerge from the MEF in terms of detailed programmatic specificity”. Of course you can’t afford to be seen attacking the futility of the forum so you retreated to your Yes Minister training to disguise it with gobbledegook.

Rudd is a technocrat so providing mannerism fodder for a generation of comics is a small price to pay for commanding the message. But here is where the problem begins: the real message gets lost in the subterfuge and his ego is too big notice it. Perhaps, like the media, he needs reminding about the two inconvenient facts that are the real major news stories at the moment: The people he leads are the world’s biggest-carbon polluters and his neighbours in the Pacific Islands are drowning.

Instead of these inconvenient truths, we hear him leaking low expectations to the hosts about the December climate summit in Copenhagen. But Copenhagen can’t just be pointless like the Major Economic Forum was – it’s time to hear about some detailed specified programs to save the planet. Rudd is talking down the prospect of a victory for renewable energy because he has been captured by carbon storage. Australia remains locked in high carbon solutions after 20 years of climate change talks. That’s not good enough, Mr Rudd, and if you can’t support Kyoto II, then get out of the way of those who will, just like Howard did. Otherwise we’ll all be as fucked as Senator Feeney.
Posted by Derek Barry at 1:55 am