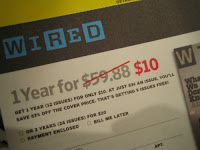 The prestigious English publication The Economist is the latest high profile media outlet to announce it will charge for online content. The weekly magazine (which currently retails for £4) has decided on a paywall to be implemented in the next six months. It follows a review it undertook after Rupert Murdoch announced similar plans for News Corp content last month. The Economist had previously charged for online content but gradually opened it up for free in last three years. Yvonne Ossman, its UK publisher, claimed that “people will pay for analysis and debate”. (photo by sekimura)

Ossman may be right for a quality title such as The Economist. Its brand of high quality journalism is certainly a sad loss to free content. What is more problematic is exactly how much people will be prepared to pay for all the “newsy” things they used to get for free. The paywall market is becoming increasingly crowded and may end up competing for scarce discretionary dollars. Brisbane academic Terry Flew doubted last month whether consumers will accept paying for what they are currently getting for free simply because they know it costs the publishers money to produce.

Besides questions of profitability, the other main local argument is what sort of content might go behind paywalls. The impressive newcomer to Crikey’s Pure Poison collective, Dave Gaukroger, outlined a case earlier this week for how Murdoch might make it work. He says sport is one of the main attractions in getting people to subscribe to Pay TV and could work for online also. Gaukroger also suggested that News may leverage off its stable of political commentators particularly the popular demagoguery practiced by Akerman, Bolt and Blair. He said that “people will pay to access content that reinforces their world view, so long as it has a level of authority that they are comfortable with.”

Writing in New Matilda yesterday, Jason Wilson picked up on some of Pure Poison’s points and added a few of his own. Wilson agreed with Gaukroger that News could make its venture work but didn’t think News would gain from hiding their celebrity commentators behind a paywall. But he did agree that paying for sport might succeed behind a paywall if it can be packaged with on-demand and interactive services or bundled with Pay TV subscription. Wilson says “the tide is running in the direction of multi-channelling, niche audiences and content that's made for (and increasingly by) reasonably discrete fan communities.”

Over at Larvatus Prodeo, Mark Bahnisch isn’t sure that niche content will pay its way. He says the questions that haven’t been answered are how much of News’s content is “actually stuff people want at all, and then how much do they want it.” He says people read very differently online compared to print and stuff that might sell magazines would not necessarily have a price online.

I also think there is a question that hasn’t been answered, though it is not the same as Bahnisch’s. I don’t know exactly what content News will put behind a paywall but I assume that whatever goes there will likely be a money earner even if audience numbers are well down. What interests me more than News’s profits is who will benefit from the gaps they leave behind? All sorts of openings will appear in the fields of whatever content is taken out of the free public sphere. Whether it is news, sport, expert opinion, commentary, specialist reporting or some combination of those, their absence will provide opportunities for others. Initially what remains of free coverage in these areas may be scratchy (depending on coverage by the ABC). Those who can afford it will pay News and the other providers for the convenience. But there will remain a large audience out there who either cannot or will not pay for content. These people will be casting the net around widely for other ways of finding out what they need to know.

This is a great opportunity for bloggers and social media exponents - especially ones who can take advantage of higher rankings in Google searches and flourish without the drip feed of linked news. As Flew noted there are new ways of gathering a reputation “through ranking systems, word of mouth, shared links via Facebook, Twitter feeds etc.” While the big players are locked away with their monetised audience, the wider field is open to new voices who can make consistent, compelling and attractive arguments. It is worth noting that a recent Future of Media Summit in Sydney rebadged itself as "The Future of Influence" because “media is becoming far more about peer influence than information and reporting”. Influence is based on conversations and aggregated opinion and paywall content fails on both counts.

This is why News Corp’s plans are truly revolutionary, albeit unintentional. Regardless of whether Murdoch makes money behind the paywall, his actions will set off a chain reaction that gives smaller players a unique opportunity to become trusted brands.
Posted by Derek Barry at 1:06 am