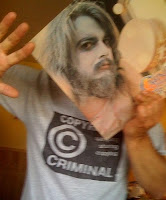 The Internet Industry Association (IIA) has made an application to become “friend of the court” in an upcoming legal battle between copyright groups and an ISP over illegal downloading. While APC could be said to be a bit extreme in saying this civil action could “shut down the Internet” the outcome of the case could nevertheless have significant ramifications for online usage in Australia. The industry body Australian Federation Against Copyright Theft (AFACT) is alleging the ISP iiNet infringed copyright by not preventing customers from downloading pirated material.

Because of the potential knock-on effects, the IIA, which represents the wider Internet community as well as ISPs, has applied to be amicus curiae, a ‘friend of the court’. Though it has yet to make a submission, AFACT has opposed the application because it thinks the IIA will be biased because iiNet is a member. (photo by Harry CC BY 2.0)

AFACT took the initial action in November last year claiming iiNet ignored repeated notices which identified thousands of illegal file transfers over their network. These included movies such as "Happy Feet" and "I Am Legend" which users obtained using BitTorrent peer to peer technology. iiNet’s managing director Michael Malone called it an unfounded allegation and said it was not their job to police traffic on their network. “If someone is breaking the law, let the police and the courts do their job,” he said.

The case shows that the industry wants to turn the screw on ISPs to stop illegal downloads and is starting with the easy-to-handle small fry. iiNet says it does not support piracy in any form but it would be naïve to believe it is not common. According to the ABS just 30 percent of all Australian users were on Broadband in 2005, but three years later that figure had risen to 84 percent. With faster Internet connections now the norm, downloading content has never been easier or more commonplace.

Copyright owners cannot directly identify infringers but can identify IP addresses. Once identified, they send infringement notices to providers. But Australia does not have blanket agreement between content companies and broadband providers about file swapping. While some ISPs such as Optus forward infringement notices to customers, others like Telstra ignore them completely. According to Malone, iiNet is in the active camp and passes along each complaint to state police who share the building with the ISP. He says what AFACT wants his company to do is impossible. They cannot act on allegations against customers. "AFACT seems to expect ISPs to be judge, jury and executioner here", said Malone. "We are meant to take their unfounded allegation, then cut customers off.”

According to digital media academic Tama Leaver, the case will test the safe harbour provisions which were brought in during the recent Free Trade Agreement with the US. The provision provides some immunity for ISPs when providing carriage services. The law limits remedies to infringements when transmitting, hosting, caching or referencing information according to Division 2AA of the amended 1968 Copyright Act. But AFACT are claiming iiNet are in breach of sections 115 and 116 of the Act (immediately prior to Division 2AA in the Act) which are the provisions which deal with infringement of copyright.

AFACT is the film industry’s enforcer to act on piracy claims. According to its website, its heavy hitting members include Village Roadshow, Walt Disney, Paramount, Sony, News Corp, Universal and Warner Bros. All these companies are listed as plaintiffs in the matter alongside the Seven Network. They have asked the court to order iiNet to act to prevent the continuing unauthorised use of their material by customers. It says piracy results in lost jobs, and limits investment in new programs and films, as well as in new technologies which benefit consumers. The presiding judge will make a decision on the IIA’s amicus curiae application in the coming weeks and the Federal Court trial will commence 6 October.

This case will be well worth following because of how it might affect the copyright law faultline between the rights and benefits of authorship and the general public’s right to enjoy created products.
Posted by Derek Barry at 12:14 am