Brisbane commits itself to the 20th century: Newman approves another tunnel 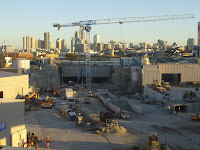 Brisbane Mayor Campbell Newman announced the building of a third tunnel today linking the Western Freeway and the Inner City By-Pass to be built entirely with council funds. Newman said Brisbane City Council had approved funding from the Queensland Government with excavation to begin by the end of next year. He says the 4.7km tunnel will be built by 2014 and will go ahead without a private partner (unlike the North-South & Airport Link tunnels it follows). The project will cost $1.7 billion at current estimates. The Rudd Government will fund half a billion of that as an election promise and Newman believes he may squeeze another $300m out of them. That still leaves a billion dollars to be funded by Brisbane ratepayers.

Newman claims the tunnel had a “compelling case” to solve the traffic problems of getting from the west of Brisbane to the north. The council says South-East Queensland’s rapid population growth and development is placing significant pressure on roads, leading to congestion, delays, increased accident rates and reduced urban amenity. It believes efficient movement of people and goods is important for maintaining quality of life and economic sustainability and Northern Link will help free up the congested arterial road network from “unnecessary cross-city traffic”.

But is this investment the best use of a billion dollars of council money? Will the rising price of oil eventually leave these tunnels as expensive white elephants? And should Brisbane be promoting transport solutions that favour private motor vehicles in an era when we are supposed to be moving towards a carbon neutral society? Why indeed are federal governments underwriting this behaviour?

The contradictions of Brisbane Council’s actions are obvious in their own Annual Report. This document lauds its own commitment to buy 100 percent “green power” while elsewhere on the same page it boasts about spending billions on road tunnels and the Hale St Bridge. The assumption is that these developments are good for Brisbane so there is little concern for what is lost or what it costs. Newman riffs off his "Cando" nickname and those that are against the plan are pilloried as standing in the way of progress.

But protest groups do exist. The likes of Communities Against the Tunnels and Stop the Hale Street Bridge Alliance lament the council’s shortsightedness on environmental grounds. They say future historians will judge the “Clem7” North South Bypass Tunnel which opens next year as Brisbane’s biggest mistake since Clem Jones removed the trams (so perhaps ironically appropriate the tunnel is named for Jones). There are also single-issue groups such as the Toowong Tunnels Solutions Group which focuses specifically on the number of off-ramps on the Northern Link.

Thi follows the public submissions to the Northern Link most of which which were opposed to tunnel exits in Toowong and Kelvin Grove. People objected on several grounds such as increased local traffic, noise and air quality issues, pedestrian and cyclist concerns, loss of social connectivity and amenity and impacts associated with construction. Mayor Newman has assured them there will be no intermediate exit points which may close down opposition – and make the tunnel cheaper.

But there is very little scrutiny about the overall wisdom of Newman’s ambitious multi-billion five tunnel strategy. The media seem more content about beating up traffic jams than questioning whether there is a better way of solving the problems. Politically, it is the continuation of a Queensland tradition of untrammelled development with very little consideration for the long-term. For the last 50 years transport policies in this state have focussed on the public funding of large scale roadways. One of the few voices to question this approach is Chris Butler in his law journal paper “Slicing through space”. He says government departments attempt to impose large scale technological solutions for transport problems without regard for their wider impacts on urban life. Butler calls it “brutal modernism”.

But the peak hour problems that Newman is supposedly trying to solve are not caused by insufficient road capacity. It is because of the immense dislocation between where people live and work. Increasingly people are moving to new housing estates far from the city and far from public transport. Governments eagerly help the movement of people to these remote but cheap areas with the aid of generous home ownership grants. But when they move into their new homes, they find the roads are the only way of getting about. They then become part of the problem, which as Chris Butler says, is a structurally dependence of Australian society on the car. This is the real problem that we need to solve – and Cando's tunnels will be of no help.
Posted by Derek Barry at 1:02 am

It makes me angry to see all this money spent on more roads, tunnels etc when our public transport system is so FAIL.

How about that money is spent on a frequent, reliable public transport system that makes people WANT to use it over their cars?