Southern Sudan looks towards its own independent future

Southern Sudanese leader Salva Kiir has used the third anniversary of the signing of the Comprehensive Peace Agreement to call on his people to support the national census next April. In a meeting with traditional chiefs in the Great Bahr el-Ghazal area of the south, Kiir said the census was linked to development and provision of services to all citizens. Kiir, who is both the President of the Government of Southern Sudan and first Vice-President of Sudan, said “enemies of peace” want to destabilise the CPA and stressed the need for disarmament in the south. Kiir also said the border between the two parts of Sudan would be demarcated by February and Sudanese president Omar al-Bashir asked him to withdraw SPLA forces south of the border.

In a major speech, Kiir renewed his call to all sectors of the Sudanese people to demonstrate tolerance, renounce violence and uphold the principle of justice. He urged his people to allow Arab nomads move south to pursue water and pasture and invited the Arab League, the AU and the international community to monitor implementation of the peace agreement and address its challenges. He reiterated the option for unity or separation is reserved for the people of the South by referendum. If separation takes place, he said, they will remain “two harmonious states”.

His speech came as the final peace talks were brokered in Kenya on 9 January to follow up on implementation aspects of the CPA. Southern Sudan is now planning a celebration to honour the anniversary as soon as Sudanese government forces and its own forces withdraw behind the agreed lines. According to local journalist Joseph Machok Makak in Khartoum, the only way to ensure peace in Sudan is by “fully implementing the CPA that forms the legal base for the resolution of Sudan's civil war, which claimed about two million innocent lives".

The Sudan CPA signed on 9 January 2005 contained a number of key resolutions. Firstly it insisted on separate armed forces for north and south with both sides withdrawing from each other's territory. Secondly the South would be autonomous for six years with a referendum in 2011 on total secession. Oil wealth would be split fifty-fifty. Two separate currencies are to be used within a dual banking system. Central government positions were to be split 70:30 in favour of Sudan and 55:45 in their favour in the contentious areas. Sharia law continues in the north but not in the south. Finally each area was to use its own emblems with the South to design a new flag.

The conflict between the sides is older than Sudan itself. Prior to independence in 1956, British rulers treated the north and south differently. They modernised northern Sudan by expanding rail and telegraph services but made little attempt to help the south. Believing the area was not ready for modernisation, they sealed off the area from outsiders and issued laws to discourage northerners from working or travelling there. They also kept the black Dinka tribesmen of the south from adopting Islam or speaking Arabic or dressing like northern Sudanese. Instead they encouraged Christianity and missionaries to establish churches and schools.

In the year before independence, a southern military unit mutinied at Torit and began to wage a guerrilla war campaign. It continued sporadically for 17 years. In 1971 new Sudanese leader Jaafar al-Nimeri met southern chief Joseph Lagu in a conference in Addis Ababa mediated by Ethiopian emperor Haile Selassie. The accords signed in 1972 gave the south some autonomy and ten years of peace followed. Nimeri ended the agreement by unilaterally imposing Sharia law on the south in 1983 in a vain attempt to head off fundamentalist opposition. Civil war broke out again coordinated by the Sudanese People’s Liberation Movement under the charismatic leadership of American educated John Garang.

Nimeri was deposed in a coup in 1989 which brought current leader Omar Hassan al-Bashir to power. Bashir declared martial law and all-out war against the south. But he was eventually forced to compromise and abolished Sharia for the south in 1991 (the SPLM wanted Sharia removed for all Sudan). In 1998 both sides agreed in principle for a referendum for the south but were unable to finalise the details until Intergovernmental Authority on Drought and Development leaders forced the CPA in 2005. Garang was killed in a plane crash barely weeks after finalising the peace agreement. His death brought Salva Kiir to the leadership of the SPLM and defacto leader of Southern Sudan. 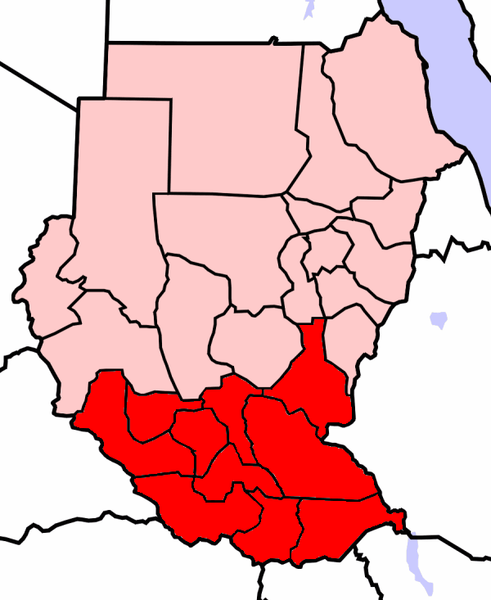 Southern Sudan now has its own constitution and seems well on the way to negotiating its own future. Yet seasoned Sudan watchers wait pessimistically for President Bashir to weasel his way out of this latest agreement as he has done with so many in the past, both in Southern Sudan and Darfur. Kiir knows he has to tread delicately, hence the cautious speeches this week. Khartoum remains highly reluctant to give up its power in the margins of its British inheritance, particularly one with so much oil. The conflict has claimed the lives of two million people who have died directly of war, or of disease and famine. Another half a million have fled the country. The stakes are high for those who hope.
Posted by Derek Barry at 10:26 pm

just for a second please google out the AFRICAN map .. and look by your self how many countires in it .. you will see countries that you never seen it before or even heard of ... why .. because of some people in South and North fighting for nothing , all they got is they lost loved people first , second , they lost wealth ... gold in East .. Oil in West ... nature in South ... history in North ... so if so called Kiir and the other one Bashir , if they think think think .. and they set down and say ooooooooh you know what we can get out of this in a better way .. we can make a new Sudan , a Sudan that people immignrat to it , a new gate to Africa , a new United State of Sudan ... a new WORLD ... that is what I think is better ... WHAT DO YOU THINK WOOLLY ?

Wow, think again man. If powers are united we know someone is going to takeover and use it against other side, especially in south, we have suffered a lot from this war...sOoo we can't afford to have any of it, not now that we had peace.

Two brothers are raised by the same parents and they go on to live separate lives. So why not us, so long as everyone (from North to South) is living well I don't see any problem.

It's not a big deal that the country is going to be divided, in fact it gives us more freedom and it will save thousands of lives from being lost as we have witnessed from the previous cold war.

I guess that another way to look at the future of this country. A country where there will be no war, no Autocratic leadership and no corruption. If that what its take, then hell yeh, let it be dived for the sake of its people.

Our brothers of south sudan have suffered alot and this is the only way freedom can be retained to them. It has also proven the dream of Gaddaffi as a failure as that blacks christians and arabs can not be united and form a United States of Africa. Arabs by nature sees themselves to be white and superior than black people. so VIVA for our brothers in the south sudan for the secession from the greed ones Arabs