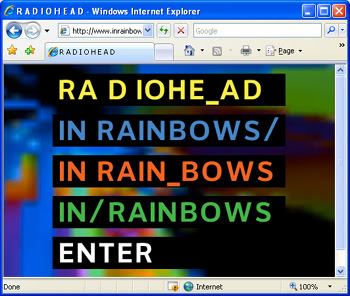 Radiohead front man Thom Yorke has hit back at record label EMI for suggesting the reason the band left the label because it refused to come to a $20 million deal. The spat comes in the wake of Radiohead’s independent release of its new album In Rainbows to huge acclaim. Speaking on the band’s website Yorke denied money was the reason for leaving EMI. “What we wanted was some control over our work and how it was used in the future by them,” he said “That seemed reasonable to us, as we cared about it a great deal”. Yorke also warned new bands not to sign a record contract that strips them of their digital rights.

The claims come as Radiohead finally releases the CD version of In Rainbows after releasing it three months ago online in what the New York Times called a ‘tip jar’ arrangement. The same article now questions whether anyone will fork out hard cash for the “material” version of the same product. But Radiohead have pre-empted the question by promoting the CD release with a “prerecording” of the band performing songs from “In Rainbows” on their own website and on Current Television as “Scotch Mist”.

This is extremely clever marketing by the band. On 10 October, Radiohead released In Rainbows as a digital download. For the next two months fans could download the album and pay whatever they wanted for it or indeed proffer no payment at all. The move caused a sensation in the music industry. No band as big as Radiohead had ever done such a thing. Besides the media hype, the music won the plaudits of critics as diverse as Pitchfork and Wired. The ploy also worked brilliantly from a public relations perspective, In Rainbows is the most talked about album of 2007. However the band has not released any figures about exactly how many downloads were made or how much people paid for them.

The band has recently celebrated its 21st anniversary. The original four members were all public schoolboys at Abingdon school in Oxford. Yorke (vocals), Ed O'Brien (guitar), Phil Selway (drums) and Colin Greenwood (bass) formed a band in 1986 called “On a Friday” celebrating the day on which the foursome got together to practice. Greenwood's brother Johnny soon joined on synths and guitars. But the band did not gain much momentum until after they completed their various degrees in the early 90s. They played in the indie scene in Oxford and eventually attracted the attention of the recording industry. They signed with EMI in 1991.

EMI’s first advice was to get the band to change their name. Singer Thom Yorke decided they would take their name from the Talking Heads’ song “Radio Head”. Radiohead’s first EP with EMI “Drill” in 1992 is now a sought-after collector’s item but at the time failed to break the British top 100. Their breakthrough came when their 1993 Creep EP reached number 2 in the Billboard Modern Rock Track Chart.

Despite this, the first album Pablo Honey (including the song “Creep”) failed to excite. While their 1995 second album The Bends got critical acclaim and some success, they had to wait until 1997 and the release of Ok Computer to really scale the musical heights. The album was a critical and commercial success and spent 71 consecutive weeks in the UK Charts. According to ‘reluctant fan’ Jon Lusk, the album captured the zeitgeist of the despairing-yet-hopeful dying days of the British Conservative administration. Others said the band had caught a wave of generational anxiety. Whatever it was, the album was quickly proclaimed one of the greatest albums of all time.

Radiohead found it difficult to work out what to do next after the plaudits of Ok Computer. They took a leisurely three years before they released Kid A. Without any proper marketing, Kid A went straight to number one. Fans were eager to soak up the new Radiohead experience. Critics raved; Pitchfork gave it ten out of ten. This new album was a stark, bleak experience and mostly synthesised. Brent DiCrescenzo perceptively called it the “sound of a band, and its leader, losing faith in themselves, destroying themselves and subsequently rebuilding a perfect entity.” But after the hype had calmed down, this perfect entity had infuriated as much as it inspired.

Amnesiac was released in 2001 comprising of additional tracks from the Kid A sessions. It too was successful but although displaying a more jazzy feel, it also suffered from the deep depressive attitudes that infused the earlier album. The more guitar oriented Hail to the Chief in 2003 represented in many ways a return to earlier form. Some critics were disappointed feeling that Radiohead had not evolved creatively with this new record. The band didn’t care. At the height of their fame, they launched a world tour headlining at Glastonbury and counting down the time to the end of their contract with EMI.

Finally free of the recording contract shackles in 2005, they began work on a new album. In an interview with Wired, Thom Yorke claimed EMI allowed no clauses for digital music rights as their contract was struck years before digital music stores were available. When In Rainbows was finally released in October 2006 it was the first real opportunity the group had to earn money on a digital offering. Yorke said the flexible price was manager Chris Hufford’s idea. “We all thought he was barmy. As we were putting up the site, we were still saying, "Are you sure about this?" But it was really good,” said Yorke “It released us from something. It wasn't nihilistic, implying that the music's not worth anything at all. It was the total opposite. And people took it as it was meant. Maybe that's just people having a little faith in what we're doing.”
Posted by Derek Barry at 10:22 pm

I dont think that Radiohead is declaring war on the music industry. I think they are just trying to make a buck. For every album sold, an artist makes about $2, which is about 14%. The big argument is about the digital distribution of their music- most artists with older contracts make zero money on downloads. They wanted to have an equitable agreement. They couldn't reach one-this Guy Hands at EMI sounds like he doesn't understand the music business all that well- he tried to hardball the band. They guys at Radiohead are smart, stubborn folks- They used the "tip jar" download and webcasts as the primary promotion vehicle, bypassing the standard industry publication schedules. It's not only the record company that's being slagged- it's the music magazines and their advertisers as well. There are going to be a whole lot of industry folks that are going to be pissed off with Thom and Co.

Anyway- it will be interesting to see where this ends up.

I used to own a record shop when Radiohead were first signed to EMI, i saw how much money they spent on them and how EMI stood by them even when they wern't selling a bean.
Many (Hip) bands also selling sod all were at the same time slagging off the pop artists on their own labels, pop artists who were making all the cash, so thatthe likes of Radiohead and all could continue making records that no-one was ,as yet, interested in.

These same artists have now (thanks to some patience) made the big time, but don't give a stuff for anyone to follow, or anything to do with the industry.
Yet they are the most vocal when it comes to what they think of music and where it goes.
And you wonder why some labels drop artists if they don't hit with their first album ?
Where do these people think the money comes from ?
Fake plastic Trees ?