The Pearly Gates of Cyberspace 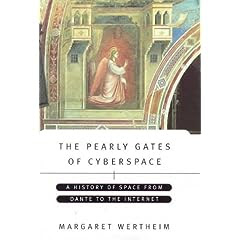 The rise of online social networks continues unabated. Myspace has upward of a quarter million members. Facebook boasts another 60 million members storing 1.7 billion photographs. Meanwhile thousands of smaller sites have started to fill user niches to connect and talk about the most abstruse topics imaginable. All these sites promise a new cyberspace arena of equality and friendship.

In her book “The Pearly Gates of Cyberspace: A History of Space from Dante to the Internet” Australian philosopher Margaret Wertheim looks at the parallels between cyberspace and religion. As the subtitle suggests, the book looks at the way space has been treated through the centuries. She tracks how the “space” humans found for the religious soul was eventually squeezed out by science and the Enlightenment. Not until the advent of the internet and cyberspace does the soul have room to move again. The digital domain, argues Wertheim, is an attempt to realise a non-physical space for the ancient Christian concept of Heaven.

Wertheim quotes the similarities Umberto Eco saw between modern America and the last years of the Roman Empire. In both places strong government and social polity collapsed leaving society open to rupture and fragmentation. In Roman times, the feudal lords filled the gap, in modern times it is corporations. In Roman times the Christian religion emerged to fill a spiritual void. Today, Wertheim argues, cyberspace with its repackaged idea of Heaven fulfils the same need in a secular technological format.

The term “cyberspace” was invented by William Gibson in his 1984 sci-fi novel Neuromancer. For Gibson cyberspace was a “bodiless exaltation”. Others hailed the promise of cyberspace’s transcending possibilities. Psychologists suggest the disembodiment of the Internet appeals especially to young boys who are going through awkward physical transformations. The metaphor “surfing the net” conveys a real-world image of prowess and grace. Meanwhile the old Sanskrit word “avatar” (meaning the incarnation of a higher being) offers a whole new anonymous bodily experience in cyberspace in such domains as Second Life in what Wertheim calls an “outpouring of techno-religious dreaming”.

Wertheim traces the loss of a physical soul-space to the end of the Middle Ages. In his Divine Comedy, Florentine poet Dante Alighieri documented a trip to Hell, Purgatory and Heaven accompanied by Roman poet Virgil. This was a voyage through the Christian soul. Wertheim described it as a map of soul-space. Hell was in the centre of the earth (“abandon hope, all you who enter here”), Purgatory was an island in the southern hemisphere where people waited to be judged and Heaven was in the stars where the just ended up. Dante and Virgil wandered through all three kingdoms in a spiritual journey. All three are real places for Dante, even if it is only through his imagination he describes them.

Wertheim traces the victory of physical space to a contemporary of Dante, Giotto di Bondone. Giotto's mastery of perspective paintings gave the physical world a new splendour. His paintings allowed viewers to look through the physical space behind the picture plane. He created a virtual world for the subjects of his paintings. They reflected the changes in the Western zeitgeist that represented the world in a way that had no room for the ineffable Christian soul-space. In science Roger Bacon promoted the physical realm showing how it would lead to improvements in agriculture and medicine and could prolong human life.

The twofold reality of the Middle Ages was now under threat. Nicholas of Cusa laid out a new cosmology which unbounded space and insisted the Earth was not at the centre of the cosmos. Fifty years later obscure Polish priest Nicolaus Copernicus used his ample spare time to disprove the ancient Ptolemaic celestial clockwork model. Johannes Kepler took Copernicus’s work to demolish the distinction between celestial and terrestrial space. Everything in the sky, Kepler postulated, worked to the same natural physical laws as on Earth. Galileo proved Kepler right with his observational science. Descartes then gave infinite space a philosophical imprimatur that left no room for “God” to exist. It was up to Isaac Newton to synthesise the work of Copernicus, Kepler, Galileo and Descartes to state a universal law of gravitation that worked for celestial bodies as much as earthly ones.

In the 20th century, space became more relativistic. Edwin Hubble made two great findings: he found there were multiple galaxies and then he made the devastating discovery they were all moving away from each other. The universe was expanding. Hubble was uncomfortable with his own findings and the almost religious conclusion the universe had a beginning and an end. Einstein found a mathematical model to explain the “general theory of relativity”. The velocity of light was the same relative to everything. This meant space and time were not absolute. The theory explained gravity, which was a by-product of the shape of space. Einstein’s theory gave way to hyperspace and its postulation of ten or eleven dimensions of space, string theory, and the possibility of a theory of everything. In the new cosmology mathematics was all; anything that couldn’t be expressed in numbers did not exist.

Computers thrived on numbers (especially 0s and 1s). The Internet is growing at an astonishing rate. Written in the late 1990s, Wertheim’s “Cyberspace” talked about an expansion of a thousand host computers to 37 million in 15 years. Blogs were unheard of 1997 now there are 70 million or more. Cyberspace is a new place to socialise and play for billions of people. Most importantly to Wertheim, it is not subject to the laws of physics. It therefore returns us to a dualistic theory of reality. People create new identities which has the potential to split the self into a radical multiplicity. It is a new form of “self space” which exists independently of physical space.

In the final chapter, Wertheim returns to the religious theme of the title. She quotes a Virtual Reality guru Kevin Kelly who said the internet was a syncretic version of Christian ritual. In cyberspace, bodies do not age and perfection is possible. Sci-fi writers maintain cyber-immortality is possible. Freed from the prison of our bodies, our cyber-souls will soar into “the infinite space of the digital ether”. Yet it is the all-too-human communal aspect that gives the social network sites their attraction. The Internet becomes an “electronic agora” where people rebuild the communities lost in mall culture. It is a communal inner space of humanity’s own making.
Posted by Derek Barry at 10:11 pm

"She tracks how the “space” humans found for the religious soul was eventually squeezed out by science and the Enlightenment."

Interesting, but science is the study of the physical word, and religion is how we treat the spiritual world. Science can't squeeze things out of our soul. It's as illogical as saying that planets have replaced tea as my favorite drink.

One has to open yourself to other possibilities, because many things that were once proven as scientific facts are being disproved by new discoveries.