Tamil Tiger rebels killed eight civilians and two policemen yesterday in southern Sri Lanka as the violence escalates following the end of the six-year ceasefire. The war has taken a new and dangerous turn with Tamil forces determined to take the battle to the relatively peaceful and mostly Sinhalese south of the country. The ten were killed in an ambush in the village of Thanamalwila, 250km southeast of the capital, Colombo. According to military spokesman Brigadier Udaya Nanayakkara, rebels opened fire on civilians in the village killing three and wounding three others. After they fled the area, investigating police and army troops found seven more bodies.

Their deaths bring the toll to over 300 in the last two weeks. Violence has spiralled out of control in the Indian Ocean island nation after the Colombo government unilaterally announced the end of the ceasefire with LTTE (Liberation Tigers of Tamil Ealam) two weeks ago. The latest incident happened just two days after rebels massacred civilians on an attack on a bus in a town in the same area. Attackers detonated a 20 kg roadside bomb alongside a passenger bus as it travelled through the remote town of Buttala. According to witnesses, gunmen then shot panicked passengers as they tried to flee. "Everyone that got out through the doors, they shot and killed," said 25-year-old passenger Sampath. "I jumped from the window and just escaped." 27 people died and another 62 were injured in the attack.

Meanwhile government troops have been wreaking their own havoc against the rebels as the country teeters on the brink of all-out war. Colombo claims to have launched a major offensive and killed 250 rebel soldiers in the last two weeks. There are conflicting claims about whether government fighter jets have destroyed a rebel base near the northern town of Kilinochchi where Tamil Tiger leaders were meeting. According to the pilots the base was successfully destroyed but the pro-rebel TamilNet website said the planes "bombed a civilian area with a mechanic workshop".

The government has defended its 2 January policy decision to withdraw from the truce citing “thousands of violations” to the Norwegian-brokered ceasefire agreement made by the rebels and therefore the truce itself had failed. Confusingly they also claimed the termination of the truce would not hamper the peace negotiation process. Sri Lankan Foreign Minister Rohitha Bogollagama tried to explain to reporters why this was the case: "[the end of the truce] gives us broader space to pursue this goal in a manner that involves all sections of the Sri Lankan polity, which remained sidelined due to the CFA, an agreement solely between the government and the LTTE.” 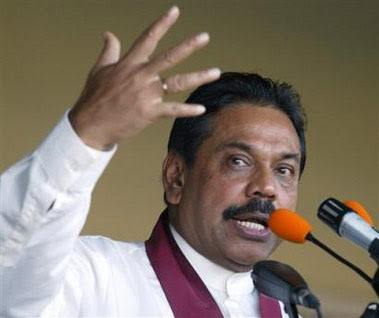 Nevertheless the real reason is more likely to be that the government believes the Tamil Tigers can be fatally weakened by a concerted attack. President Mahinda Rajapakse appears convinced that victory is near and is determined to push his troops into the northern jungles to kill LTTE supremo Velupillai Prabhakaran. Rajapakse is a rabble-rousing ultra nationalist determined to find a military solution to the problem. He has promised to hand over Prabhakaran to India where he is wanted in connection with the assassination of Rajiv Gandhi. Gandhi had unsuccessfully sent in Indian troops to keep the peace in Sri Lanka.

With both sides willing to fight to the death, there is no end in sight to the killing. The armed conflict in Sri Lanka has already claimed over 65,000 lives since 1983. Tamil Tigers have been fighting for an independent state for Sri Lanka's 3 million ethnic Hindu Tamil minority in the north and east after decades of being marginalized by Buddhist Sinhalese-dominated governments. In 2002 Norway brokered a ceasefire agreement which gave the north defacto independence and would have brought a federal-type arrangement in Sri Lanka. That prospect raised fear in the Sinhalese community that the country would be eventually split in two. Now Rajapakse is running the risk of the country been torn apart to avoid been split up.
Posted by Derek Barry at 3:00 pm

Talk about defeating the objective! Will we ever find an alternative to politicians?

"With both sides willing to fight to the death, there is no end in sight to the killing. The armed conflict in Sri Lanka has already claimed over 65,000 lives since 1983. Tamil Tigers have been fighting for an independent state for Sri Lanka's 3 million ethnic Hindu Tamil minority in the north and east after decades of being marginalized by Buddhist Sinhalese-dominated governments."

They are ridiculous for fighting over it.
3 millions hindus want an independent State because their Buddhist government despises them.
God religion is a pile of crap.