In a transparently desperate and uninspiring move, the 17 parliamentary members of the Queensland National Party have re-appointed Lawrence Springborg as its leader. Springborg previously led the party from 2003 to 2006 and resigned in 2006 after his second comprehensive election defeat at the hands of Labor. He now replaces the hapless Jeff Seeney who never faced the voters as party leader. Springborg regains the leadership with the Nationals polling at just nine per cent and he is considered the most attractive proposition to lead a proposed new state-based conservative force that might emerge from the Queensland Nationals and Liberals.

The news came just a couple of days after Springborg said a leadership coup was "not on the radar" despite being approached by parliamentary colleagues to challenge Jeff Seeney. But soon-to-be-deposed leader Seeney was not fooled and knew the challenge was just under that radar. He accused Springborg of manoeuvring behind the scenes. "I'm particularly disappointed that Lawrence Springborg has chosen to pursue this issue in the media,” he said. Springborg's machinations worked to perfection and he won yesterday's vote in some comfort.

The scenario is similar to what transpired in 2003. At that time Springborg was touted as a replacement leader for Mike Horan. The Nationals were polling poorly at 8 or 9 per cent and Horan was perceived of being incapable of mounting any serious opposition to then Labor leader Peter Beattie. Springborg (who was deputy leader under Rob Borbidge) urged a party ballot and put his name forward as leader under the label of “progressive conservative”. He won the party ballot easily by nine votes to three. Then just 34 with four young children, he represented a generational shift for the Nationals. He immediate announced then (as he did yesterday) his most urgent goal was to unite with the Queensland Liberals.

Of course, that dream was scuppered at a federal level by Prime Minister John Howard. Now the ambitions are just state based. According to anonymous acerbic Queensland psephologist Possum Comitatus, Springborg’s dubious prize is to occupy one of the state’s two opposition leadership positions. He believes any merger is doomed to failure due to the radically different supporter bases of the two parties. He also correctly points out that it doesn’t matter what the Nationals the next non-Labor leader of Queensland will be a Liberal. The coalition needs to win another unlikely 20 seats from Labor to win power and these seats are in the populous south-east of the state where only the Liberals are capable of winning.

While the Possum was scathing, fellow Queensland political pundit Mark Bahnitsch conceded Springborg is “marginally better placed” than Feeney to take up the fight to Labor leader Anna Bligh (who herself has yet to be tested at the polls as leader). But that was where the praise ended. Bahnitsch called Springborg a “single note politician” due to his infatuation with the merger with the Liberals, a prospect doomed to failure anyway. Bahnitsch also castigated the laziness of the Nationals frontbench which he said was content with the spoils of opposition. 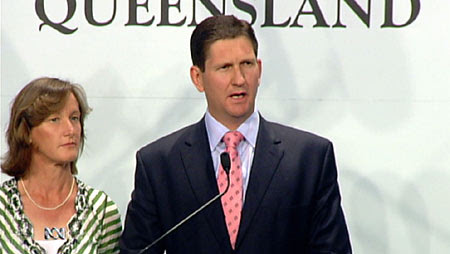 This laziness is an arrow pointed straight at Springborg himself. Tracey Arklay and John Wanna’s analysis of the 2004 Queensland election defeat was a damning indictment of his inactivity. Arklay and Wanna said that Springborg allowed Peter Beattie to run a “non-campaign”. Defending 66 out of 89 seats in parliament, it suited Beattie to avoid campaigning and adversarial politics to reduce the risk of a protest vote. However the strategy would not have worked unless supported by a compliance and supine opposition. Springborg entered the election with low expectations, failed to challenge the Premier and relied on a vain hope of a “natural correction”. The result was a second successive landslide win for Labor. Springborg didn’t do much better in 2006 against an even more tired Beattie Government. It beggars belief that anyone thinks he will make any further ground against Labor rejuvenated with Anna Bligh’s leadership.
Posted by Derek Barry at 8:28 pm

It's the hallmark of parties that have been in opposition that they go through periods of changing leadership and talk of restructuring the party. Springborg is like Beazley; he's lost before but he's got a face you can remember and is seen as "safe". Seeney (not Feeney) is the Simon Crean of the Nationals leadership merry-go-round; completely unelectable and uninspiring.

The Nationals are desperately in need of a Kevin Rudd style leader. Unfortunately for the Nationals and Liberals, there is no single charismatic and experienced operator with a vision for the state. Rudd provided voters with an excuse to kick Howard out and to get someone in with fresh ideas. The Coalition can not truly claim to stand for change and fresh ideas.