Philippines: Estrada to ride into the sunset one more time 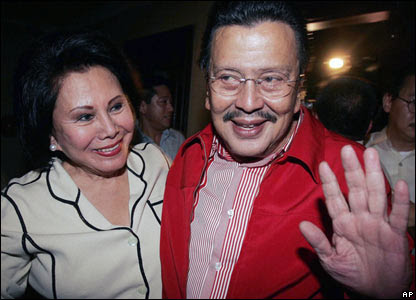 Convicted former Philippine president Joseph Estrada is planning a comeback, but he claims it is only as a movie star. He is planning a starring role in a film opposite one of the Philippines' leading comedy actresses saying he needs the money. Though still the defacto opposition leader, he has brushed off speculation he plans to return to politics. Estrada was released after six years in prison when granted a presidential pardon two months ago.

Estrada made his name in over a 100 movies before switching to politics, becoming vice-president to Fidel Ramos. Estrada won the 1998 presidential election in a landslide which was the biggest margin in Philippines history. Estrada lasted just 30 months in the top job, before he was accused of allegations of corruption and incompetence. He was impeached after a People Power protest. He was imprisoned for life in September 2007 after a six year trial only to be pardoned two months later by his successor Gloria Macapagal-Arroyo. Now his supporters are creating speculation Estrada will run again in the 2010 election. The current administration has warned him against it, saying the pardon specifically bans him from running again for the presidency.

Estrada’s overthrow in 2001 was the second people power revolution in the last 20 years and symptomatic of the Philippines torrid political history. The country was ruled for three hundred years by the Spanish in the wake of Ferdinand Magellan’s landing on the island of Cebu. Magellan himself was killed by local chieftain Lapu Lapu on the island on Mactan but the Spanish were undeterred and launched another assault from Mexico to claim the islands. They named Cebu the "Islas Filipinos" in honour of King Philip II.

The Spanish had two hopes, economic and religious, for their new south east Asian colony. Firstly, they hope to emulate the Portuguese who had turned the nearby Spice Islands (Moluccas) into a lucrative source of exotic spices. In this, they were to be disappointed. But they had better results with their second ambition. Spain hoped to convert the natives to Catholicism. They sent in a group of Augustinian, Dominican, and Franciscan missionaries collectively known as the Friars who carved out great secular power for themselves over the coming centuries. Their rule became known as the Friarocracy.

While the Philippines proved to be relatively spiceless, they discovered in the large northern island of Luzon an excellent deepwater port which could serve as a trade link between Asia and the Americas. Known as Manila, it quickly became the capital of the new colony. Galleons plied the route from Mexico and China exchanging gold and silver for silk. The Spanish fought off the Chinese, the British and the Dutch for control of Manila and ensured a compliant local population as Catholic priests established towns around churches and gave religious instruction.

By the early 19th century the galleon trade was in decline and Manila’s wealthier mestizos (descendents of the Spanish intermarried with locals and Chinese) began to turn their attention to the fertile lands of the highly volcanic islands. They grew sugar and hemp and as they grew rich, wanted a slice of the political power held firmly by Spanish officials and friars. Fillipinos educated in Europe came home resenting the power of the elite as well as noting Spain’s own backwardness compared to its European neighbours. Physician and writer Jose Rizal came home from Spain in 1892 and founded La Liga Filipina, intent on enacting political reform.

While Rizal wanted a peaceful transfer of power, others founded revolutionary societies dedicated to the violent overthrow of the Spanish. The Katipunan launched a bloody armed revolt in 1896 but was defeated by the stronger Spanish forces. Although Rizal was not involved, he was arrested and accused of insurgency before being executed by firing squad. His martyrdom inflamed Filipino passions and a stronger revolt launched in his name. Just when it seemed independence was on the cards, the Americans became involved, bringing their own brand of colonial rule.

In 1898 the US went to war with Spain over rights to Cuba. The war spread to the Pacific and US forces destroyed the Spanish fleet in Manila Bay. The Filipino rebels supported the Americans and took control of the country. In order to save face, the Spanish signed a secret deal with the US ceding rights to the Philippines for $20 million. The islanders had no say in the treaty and found themselves betrayed by their “allies”. The rebels continued to fight a war against their new rulers until they were defeated in 1902.

Nevertheless the Americans proved more benign rulers than the Spanish and encouraged Filipinos to become involved in their own political affairs. They wanted the Philippines to follow the US model of democracy. Under the Tydings-McDuffie Act, a commonwealth government was established in 1935 under the presidency of Manuel Quezon. Full independence was promised for 1946. But war intervened and the Japanese invaded Luzon just ten hours after attacking Pearl Harbor. They declared a puppet republic in 1943 under Jose Laurel. But General Douglas MacArthur made good on a promise to return a year later overturning the Japanese administration at a horrendous cost in Filipino lives.

In accordance with the previous agreement, Manuel Roxas was appointed first president of an independent Philippines in 1946. Landowners retained feudal control of the war-ravaged country and agrarian grievances triggered the Huk Rebellion which dragged on for almost two decades. Its end coincided with the rise to power of Ferdinand Marcos. Initially he was treated as a hero as he increased food production, financed public works and secured aid from the US. But as the tide turned against him in 1972, he declared martial law against what he saw as a Communist threat and a growing Muslim separatist movement in the south.

The Philippines settled into a pattern of corrupt and oppressive dictatorship, worsened by the assassination of popular opposition leader Benigno Aquino at Manila airport in 1983. Aquino’s funeral became the largest gathering in the nation’s history and ushered in a two year protest campaign that grew in intensity. Under pressure, Marcos declared a snap election in 1986. Aquino’s widow Corazon was put forward as opposition leader. Marcos’s handpicked scrutineers declared him the winner of a clearly fraudulent election. The announcement sparked four days of civilian unrest which became known as the EDSA Revolution (for the street Epifanio de los Santos Avenue which was the focal point of the demonstrations). Finally abandoned by his military, Marcos fled the country allowing Aquino to take power.

The 1990s began a new era of optimism which didn’t last long. Aquino’s regime was plagued by Marcos-supported coup attempts, leftist insurrections and constant electricity shortages. The massive volcanic eruption (the second largest on Earth in the 20th century) of Mount Pinatubo in 1991 was followed by the closure of the nearby American Clark Air Base which caused major economic hardship. Aquino was replaced by her military strongman Fidel Ramos who was elected president in 1992. Ramos surfed a wave of growth in the Asian economy until it collapsed in 1997. That market meltdown brought Estrada centre stage for the 1998 election.

Much of Estrada’s support came from the country’s poor who voted for him in record numbers. They remembered him from his movies as a defender of the downtrodden. But Estrada was unlike his screen persona. He did little to alleviate poverty and the economy stuttered. The negotiations that Ramos has instigated with Communist and Muslim rebels fell through. Then the corruption allegations began coming in 2000. An attempt to impeach him was squashed by his supporters. It was time for more people power. ESDA Mark II was launched as hundreds of thousands took to the streets. Once again, a president was deserted by his army and forced to stand down.

His vice-president and former opposition leader Gloria Macapagal-Arroyo was sworn in as president. Macapagal-Arroyo was born to rule. Her father Diosdado Macapagal was a one-term president who served from 1961 to 1965. His daughter gained a Ph D in economics at Georgetown University in Washington where she was a classmate of Bill Clinton. She served in Aquino’s government before running for senator in 1992 and rose to the vice presidency in Estrada’s election landslide. Macapagal-Arroyo cemented her presidency with a solid win in the 2004 election but under the Philippine constitution cannot run again in 2010.

Like Aquino before her, Macapagal-Arroyo has survived coup attempts, rebel activity and allegations of corruption. She is proving a solid financial manager. Economic growth has averaged 4.6 percent under her rule and inflation has been kept to under 3 percent. The Filipino peso was Asia's best performing currency in 2007 strengthening by almost 20 percent for the year. Analysts are now beginning to look at the 2010 campaign to replace her. Defence Secretary Gilbert Teodoro, Quezon City Mayor Feliciano "Sonny" Belmonte and Metro Manila Development Authority (MMDA) chairman Bayani Fernando are all early contenders. But Estrada can not be ruled out despite the official ban. His supporters are playing up his chances in the absence of a unifying figure among opposition candidates. Asked to confirm the report on Thursday, Estrada coyly replied: "That is just speculation right now, but who knows?"
Posted by Derek Barry at 8:39 pm