The United Nations High Commissioner for Refugees has issued a cautious welcome for the peace deal struck in the eastern Democratic Republic of Congo (DRC) province of North Kivu. UNHCR rep António Guterres told the signing conference in Kivu’s capital Goma it represented a big step in the search for a lasting peace but would not end the immediate problems. Guterres’ caution is understandable given the tenuous nature of previous agreements. The situation in North Kivu remains volatile with 800,000 displaced people still seeking refuge despite the Congolese war ending officially in 2003.

DRC president Joseph Kabila attended the signing in Goma, a city which has suffered heavy fighting in recent months. The UN and western governments exerted heavy diplomatic pressure to get the peace deal to the table and now hope the accord can put an end to fighting in the east, which has raged on despite the official end of Congo’s war five years ago. Last minute disagreements over war crimes cases threatened to derail the talks but the deal was finally sealed on Wednesday.

As well as the DRC government, the deal was signed by Tutsi rebel General Laurent Nkunda, the pro-government Mai Mai militia and about 18 other minor groups. The accord brings long negotiations to an end and includes an immediate ceasefire and the deployment of UN peacekeepers in 13 key locations. It also offers a probable amnesty to Nkunda and his forces however the rebels say the full implementation will require the disarming of a rival ethnic Hutu militia.

The signature of Laurent Nkunda was a key success factor. His forces have clashed with government troops since 2004 and he has been successful in painting himself as a protector of Congo’s Tutsi minority especially from the remnants of the Hutu Interahamwe militia (known as ex-FAR) who were responsible for the 1994 genocide in Rwanda. Nkunda helped Joseph Kabila overthrow the hated Mobutu reign but fell out with the new Kinshasa regime. The DRC and the UN issued an arrest warrant for Nkunda in 2005 but that has been nullified by the new deal.

Nkunda’s forces have been mainly fighting the government aligned Mai Mai who have been equally as brutal. Both sides use child soldiers indiscriminately. The Mai-Mai are a loosely aligned local defence group of pro-government forces made up of warlords, traditional tribal elders, village heads, and politically motivated resistance fighters. In 2006, Human Rights Watch called for the DRC government to charge Mai Mai warlord Kyungu Mutanga on counts of murder, rape and abuse of civilians. 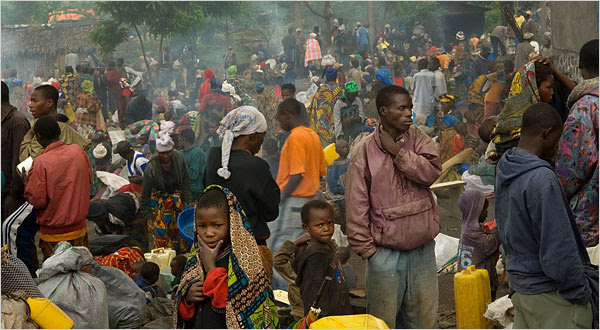 Analysts are sceptical the latest deal can achieve much as the talks excluded two key players: Rwanda and the Hutu Interahamwe (ex-FAR). Those displaced by the conflict want to see the repatriation to Rwanda of members of Hutu extremist militias they regard as the main cause of insecurity in the region. The DRC government has tabled a plan that provides for the repatriation of Rwandan Hutu fighters, first voluntarily and then by force from mid-March if they refuse to leave. But most of the people in North Kivu are hopeful the deal will bring peace to a devastated region. "There are too many killings, too many rapes and abuses that should stop at all costs," said local farmer Alphonse Batiburasabinako. Up to 1,500 Congolese die in the region every day, mostly from preventable diseases and malnutrition.

The news comes just days after the International Rescue Committee released its report into "Mortality in the DRC" (pdf) over the last ten years. The report notes that although a formal peace accord was signed in December 2002, the war has since given way to several smaller conflicts in the five eastern provinces including North Kivu. The IRC’s earlier four studies, conducted between 2000 and 2004, estimated that 3.9 million people had died (mostly from disease and malnutrition) in the DRC since 1998, making it the world’s deadliest conflict since World War II. This fifth survey, covering the period from January 2006 to April 2007, found the DRC’s national crude mortality rate (CMR) of 2.2 deaths per 1,000 per month is 57 percent higher than the average rate for sub-Saharan Africa. This is despite recent improvements. Once again it found most deaths are due to preventable and treatable conditions. The IRC says recovery from conflict is a slow and painful process. They called on steadfast international commitment to secure recent gains and prevent further deterioration in a country that remains in deep need.
Posted by Derek Barry at 10:30 pm