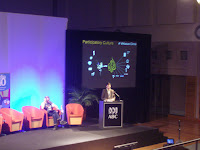 This is my sixth and final post about the Media140 conference in Sydney last week. I've enjoyed putting together my reflections of an important event and I’d encourage readers to check out Julie Posetti’s (Sydney Media140's editorial director) excellent overview and discussion of where it might lead next. See also my prior posts about my initial impressions, and the speeches of Mark Scott, Posetti, Mark Colvin and Jason Wilson, and Jay Rosen. (photo by Derek Barry)

I wanted to finish off by talking about some of the underexplored political economy of the Internet. The presentations of Riyaad Minty and Jude Mathurine brought some of the brightest ideas of Asia and Africa to Friday’s events. Both presenters are South African of similar age with a fascination for all things new media working in different fields. Minty was a digital entrepreneur at 19 before joining Al Jazeera in 2006 as a new media analyst. Jude Mathurine went into education and advocacy and is now head of the new media lab at Rhodes University in Grahamstown, Eastern Cape Province.

Minty’s presentation was a quick introduction to how the new media team in Doha promotes Al Jazeera online. Minty noted that Al Jazeera is broken into six major functions: Arabic, English, documentary, sport, training and research and his group is involved with all of them. Their job is to ensure the brand stays relevant in the new digital age. Their mantra is “people trust people” so Al Jazeera has been personalising its message in what Minty called a “virtuous circle” of old and new tools and old and new audiences.

He discussed how Al Jazeera covered Operation Cast Lead (Israel’s 2008 invasion of Gaza). According to the UN Goldstone Report this was a particularly brutal occupation and unsurprisingly Israel didn’t want the media around to question their actions. They made Gaza off-limits to westerners but Al Jazeera had two reporters Ayman Mohyeldin and Sherine Tadros inside the Strip who got their message of the devastation out on television, the website and Twitter. Al Jazeera also urged the people of Gaza to give their online “views from the ground”. Their Twitter live updates were a compelling real time unveiling of suffering that was otherwise unheard in the western media.

Al Jazeera used Ushahidi to integrate mobile, email and alerts for crowdsourced crisis mapping and provided Google maps mashed up with up-to-date bombing information. The site also enabled creative commons video footage which was used creatively by artists, activists and educators alike. Minty said that telling the truth was hard, but not telling it is even harder. His team give Al Jazeera the tools to make it just a little easier.

While Minty is doing great things in Asia, Jude Mathurine is determined Africa will not be left behind in the digital revolution. The theme of Mathurine’s presentation was that the future of journalism in that continent is firmly tied up to mobile social networks and its enormous array of tools.

The question for Africa is how many people will be able to access the tools. Although 15 percent of the world’s people live there, Africa has just four percent of the world’s Internet users. The continent is handicapped by huge income disparities, education issues, poor bandwidth and bad regulation. In South Africa the black and poor are digitally disenfranchised and online social media is biased towards the white and wealthy. Journalists suffer just as badly as the general population and have little by way of media education or exposure. Media organisations are staid and hierarchical and do not engage audiences.

Yet Mathurine says Africa will not be left out of the global village of social networks. He sees hope in the fact the social network sites such as Facebook, Youtube and Blogger are among the most popular sites in many African countries. Critically, this trend is further exacerbated on mobile services. “The revolution will be mobilised,” says Mathurine. In the last six years world mobile growth has outstripped landlines by a factor of over a hundred to one. By 2007 Africa had almost 200 million mobiles compared fewer than 30 million fixed phones. Mobile users are transforming the continent using SMS (and reconnecting the millions elsewhere of the African Diaspora).

Mobile growth is fastest among the young and are taking to the social networks in greatest numbers. Online tools such as Kabissa and Zoopy are changing the political landscape too as Africa looks to local and cheap solutions to get around its many problems. People can buy mobile handsets using open source operating systems with camera and recording capability for just $15 and the Internet backbone is slowly increasing around the continent. But SMS remains the killer app and sets the agenda often bypassing media censorship in the process. Young people and social media are Africa’s great hope for a truly democratic continent, concluded Mathurine. And mobile technology will be far more important than desktop access.
Posted by Derek Barry at 3:13 am

Thanks for a great synopsis of our international case studies. Just one clarification The Vergatoria is a Venezuelan-Chinese venture. The subsidised multimedia web ready handset is available for USD15. I have heard similar hybrid handsets being sold for USD30. The suggestion that I wanted to make is that it is not improbable that with a little political and entrepreneurial will, African countries could roll out similar handsets with iPhone style capabilities powered by something like the Android OS at a lower price. Android's ability to customise handsets to meet specific local needs and conditions would be an obvious advantage.

Thanks Jude, and thanks also for the clarification on the provenance of the cheap handsets.

I also enjoyed our chat last Friday night in Sydney. Great to hear so much going on media-wise in Africa.