Nutt decision shows the immaturity of the marijuana debate 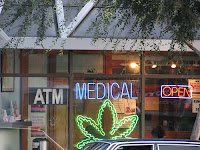 Britain’s chief scientist John Beddington has backed Professor David Nutt’s assertion that cannabis is less harmful than alcohol or cigarettes. However Beddington refused to criticise Home Secretary Alan Johnson for sacking Professor Nutt given that “trust had broken down” between the pair. The British government sacked Nutt on the weekend after he argued the reclassification of cannabis as a class-B controlled substance did not make any sense from a medical point of view. However Labour’s authoritarian stance did make sense as a way of counteracting increasingly shrill anti drug headlines in the right-wing Daily Mail newspaper. (photo by thetruthabout)

As Forth says, successive governments have run scared from sections of the popular press that purport to represent the attitudes of the public. The increasingly fraught Brown administration recategorised cannabis last year against the recommendation of its own Advisory Council on the Misuse of Drugs (ACMD). Labour had lessened cannabis from a class-B to a class-C drug in 2004 which reduced sentencing for possession from five to two years. But in 2008 Home Secretary Jacqui Smith said that prevalence of stronger varieties of skunk cannabis required a change of heart “rather than risk the future health of young people”.

The ACMD investigated the so-called skunk scare at the government’s request. It found cannabis was harmful but not serious and it should remain a class-C drug. The study also found a media bias with the press reporting 26 out 28 ecstasy-related deaths while reporting only one aspirin death in 265 and one morphine death in 72. The reporting gives the impression ecstasy is a more dangerous drug than it is. Cannabis was missing from the study because it doesn’t kill anyone.

Labour moved after Nutt went public with his criticisms of the reclassification. Johnson wrote a letter to Nutt on 30 October asking for his immediate resignation. Johnson said Nutt’s recent comments had gone “beyond” the evidence about drug-related harms and amounted to a lobbying for change to government policy. “This goes against the requirements on general standards of public life required by your position,” wrote Johnson. “As chair of the ACMD you cannot avoid appearing to implicate the Council in your comments and therefore undermining its scientific independence.”

But as the British blog Ministry of Truth writes this was completely false. Nutt wasn’t just doing his job to the best of his abilities, he was doing the job that parliament, in the guise of the House of Commons Science and Technology Committee, had specifically asked him to do – put the country’s drug misuse policies on a sound and consistent scientific footing.

Britain is not alone in its hysterical over-reaction to the dangers of cannabis. The US is just as bad, if not worse. Environmental writer Michael Pollan’s new documentary The Botany of Desire is about four crops - the apple, the tulip, marijuana and the potato - that Pollan says reflect different aspects of human desire. Pollan's says people and plants form a reciprocal relationship. We have cultivated the apple because of a desire for sweetness, the tulip for beauty, the marijuana plant for intoxication and the potato for control over our sustenance. But it took him eight years to secure the necessary $1.2 million in funding for the documentary because of the inclusion of marijuana. “We got funding, then we lost it because we wanted to devote a fourth of the program to Michael's exploration of marijuana,” said the show’s producer.

Yet hemp growing has a long history in the US. In 1619 Virginia’s Jamestown colony ordered all farmers to grow Indian hemp seed. Early drafts of the Declaration of Independence were written hemp and President Washington encouraged farmers to grow it to decrease reliance on imports. A hundred years later, hashish smoking parlours were commonplace in every American city with 500 in New York alone.

The start of marijuana’s downfall was the innocuous sounding publication of the US Agriculture Department’s “Bulletin 404” in 1916.Bulletin 404 hailed hemp hurds as revolutionary new technology for making high-quality paper. The bulletin said an acre of hemp could produce four times as much paper as an acre of trees. It also said it would become cheap once mechanisation reduced the labor intensity of hemp harvesting. Press mogul William Randolph Hearst worked out he had about ten years to make sure hemp did not crush his paper-making empire. His newspaper chain unleashed a massive racist propaganda campaign to demonise cannabis hemp under the more sinister Mexican name of “marihuana”.

The Du Pont chemical company’s suite of synthetics was also threatened by the growth of hemp and had the means to do something about it. Du Pont banker Andrew Mellon was Secretary of the Treasury under President Herbert Hoover. He appointed Harry Anslinger to head the Federal Bureau of Narcotics and Dangerous Drugs (FBNDD). Anslinger was America's first drug tsar and would remain in the role for 31 years and for most of this time his public enemy number 1 was marijuana. Between 1915 and 1933 every US state prohibited distribution for non-medical purposes. In 1937 the US enacted the Marijuana Tax Act despite the protest of doctors. Industrial hemp was criminalised and Du Pont reaped the benefits

US laws became tougher in the fifties leading to a mandatory two to ten year sentence for a first offence of marijuana possession. The 1972 Shafer Commission recommended it should be decriminalised but President Nixon rejected the report as it didn't suit his "tough on crime" stance. The next decade saw 11 states follow the Shafer recommendations but President Reagan backed tougher “no tolerance” policies in 1986. In 1996 California ignored the national law and allowed for medical marijuana use.

The futility of America’s long-term war on drugs was shown by a 2006 report which showed marijuana was the country’s largest cash crop. The study estimated marijuana production had a value of $35.8 billion exceeding the combined value of corn ($23.3 b) and wheat ($7.5 b). A 2005 study estimated legalised marijuana would save the US $7.7 billion in law enforcement costs and could generate as much as $6.2 billion annually if marijuana were taxed like alcohol or tobacco.

Back in Europe, Portugal has attempted to end the stigma of drug use. In 2001 Portuguese authorities decriminalised personal use and possession of all drugs, including heroin and cocaine. The police could no longer arrest anyone for possession. Conservative politicians denounced the decriminalisation as “pure lunacy” which would lead to rampant drug use while others predicted the country would be plagued by drug tourism. However a 2009 study by the Cato Institute has found that Portugal’s drug use has not risen in eight years and in numerous categories is the lowest in Europe. “Before decriminalisation, addicts were afraid to seek treatment because they feared they would be denounced to the police and arrested,” says Manuel Cardoso, deputy director of the Portuguese Institute for Drugs and Drug Addiction. “Now they know they will be treated as patients with a problem and not stigmatised as criminals.
Posted by Derek Barry at 6:54 pm