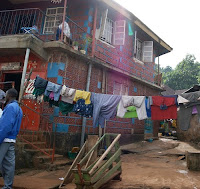 Sierra Leone President Ernest Bai Koroma has called on the west to invest in his country on a visit to London. Koroma told the BBC the West African nation is “open” to investment in tourism and mineral investment in bauxite, iron ore and diamonds. Koroma was spruiking his message at a conference last week in the British capital where he also hailed the recent Anadarko Petroleum’s discovery of offshore oil. (photo of Freetown by stringer_bel)

Koroma was assisted in call for investment by former British Prime Minister Tony Blair. While Blair’s reputation elsewhere has been sullied by his involvement in the war in Iraq, he remains a hero in Sierra Leone for the troops he sent in 2000 to end the conflict. He is still involved as an adviser to President Koroma and he was cheered as he spoke to the London investment conference. "[Sierra Leone has] got massive natural resources, wonderful possibilities commercially in agriculture, tourism, mining," said Blair. "What it's got now for the first time is a stable system of government with a president who genuinely wants to make change, root out corruption."

Blair also praised Koroma’s attempt’s stamp out corruption which has been a major drawback since the country returned to peace at the turn of the century. By 2002 the country’s Anti-Corruption Commission had investigated 500 cases but relied on the Justice Ministry to follow the cases up. Politicians were not always keen to act leaving Sierra Leone languishing at the bottom end of Mo Ibrahim’s African Governance Act. But recently Koroma has shown signs of stiffening up by sacking two ministers after they appeared in court on graft charges.

Meanwhile Sierra Leone's parliament has also approved a new mining act last week that is designed to boost government revenue and increase transparency in the sector. The Mines and Minerals Act 2009 followed the recommendations of report earlier this year by the National Advocacy Coalition on Extractives. The report argued that because of generous tax incentives, weak capacity and official corruption, the government has not previously received a fair share of mining proceeds. With commodity prices rising again and a recent oil discovery in the country, the government had been keen to introduce new regulations before investors begin a new mining phase.

In September Sierra Leone also signed the Comprehensive Africa Agriculture Development Programme (CAADP) Compact. formally adopting the African Union initiative, drafted in Maputo in 2003. The CAADP aims to ensure Africa's agricultural development as a catalyst for socio-economic growth and its goal is to eliminate hunger and reduce poverty through agriculture. At the signature ceremony Koroma said close to two thirds of his people rely on agriculture for their livelihoods and it contributes almost half of the Gross Domestic Product. “We regard CAADP as being pivotal to our poverty and hunger eradication efforts”, he said.

There is still a long way to go for one of Africa’s poorest countries. 50,000 Sierra Leoneans died in the civil war that racked the country during the 1990s. The UN Development Program judged Sierra Leone the world’s least developed country in 2000. Since then the country has undergone two successful elections. Koroma won the most recent election in 2007 winning a run-off against incumbent vice-president Solomon Berewa. Koroma has followed from the previous administration concentrating on nation rebuilding.

But not everyone agrees the country is on the right track One of Sierra Leone's most popular artists, Emerson Bockarie has released a song "Yesterday Betteh Pass Tiday", recorded in Krio which unfavourably compares the current government to the one it replaced in 2007. The song highlights corruption, the high cost of living, nepotism, tribalism, poor service delivery, poor government salaries and a static economy. Freetown trader Salamatu Bah was inclined to give Koroma’s administration the benefit of the doubt. "The government is trying, and things are better now than before,” said Bah. “The argument should not be which regime is the better or worse - we have voted for change and change is what we demand."
Posted by Derek Barry at 12:15 am