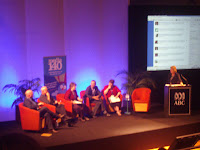 Posetti is a journalist and academic based in Canberra with over 20 years experience in the media industry in radio, print and online. Posetti is an avid Twitterer and has been engaged in eight months of active research into how journalists use the tool. Posetti’s theme was It’s a revolution not a war. The name took its cue from earlier speaker Mark Scott’s recent “end of empire” speech aimed at the legacy media barons such as Rupert Murdoch.

Posetti’s argument was there are three crises confronting journalism at the moment: dealing with the effects of new technology, the failure of the economical model and a loss of public trust. She said that the latter crisis is not getting the attention it deserves among all the clutter of the first two crises. Yet it is not difficult to see why the industry might not want to talk about it. News is becoming increasingly tabloid, trashy and truthier as it seeks ever wider audiences lured by the lowest common denominator. Editors and proprietors know that people love hearing about scandals and outrage, and they will bring it to them if it means having to manufacture them.

But as Posetti notes, there is a nasty side effect to the sensationalism used to sell such news: loss of reputation. Journalists pay the price as much as the media they serve in this interest. The professional consistently ranks low in most trust surveys of occupations. They gradually transform from guardians of the fourth estate into lackeys of corporate media giants prepared to stop at nothing to get their grubby story. Meanwhile the major issues of the day are either incorrectly reported or under-reported or both.

Posetti says that journalists should wake up to this danger. Social media is enabling many new practictioners and many more who fact-check others. If journalists didn’t engage with these new players, they would lack credibility in online communities. Posetti said such credibility was crucial to sustaining what ever model exists when the first two crises are solved.

This means that we need to pay as much attention to the public good function, if not more, than either to the death of newspapers or the lack of profits online. To do this, argues Posetti, journalists must endure with their most sacred functions: “shining a light in dark places; speaking truth to power and doing so without fear or favour, but with a commitment to accuracy, truth & fairness.”

This means having a wider definition what constitutes news reporting and the ditching of the over-blown notion of objectivity. The social age has blurred the line between journalists and citizens. This is particularly true in Twitter with its open discussions and crowd-sourcing of information between all manner of professional and amateur media players. Some of this will be serious, some will be playful (witness how tonight’s #pwnednudierun played out across television, Twitter and Youtube). But whatever it is, it is something to embrace not fear or resist. “It’s vital to accept that this is a revolution, not a war,” said Posetti. “A time for transformation, revitalisation [and] reinvention.”
Posted by Derek Barry at 2:08 am