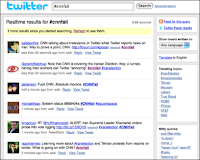 A new study of Twitter in the Iranian elections has found that that the use of the social network was greatly exaggerated inside the country. British writer Charles Leadbeater and his team found there were less than 20,000 twitterers with an Iranian address and many of these included foreigners who changed their location to “Tehran” in sympathy with the protesters. The report also found only one third of Iranians have internet access skewed towards the younger and urban opposition supporters. According to Valleywag such a tiny proportion of Iranians on Twitter means any stories about a new movement based on the social network are meaningless.

Yet it is also true to say the 2009 Iranian election was one of the most important moments for Twitter in its short life. NYU Professor Clay Shirky called it “the big one” and the first revolution catapulted onto a global stage and transformed by social media. Leadbeater’s findings appear to dispute the transformation part of Shirky’s statement but the global impact is accurate enough. The US State Department deemed it to be so important, it twisted Twitter’s arm to delay a critical network upgrade in June so it wouldn’t cut daytime services to Iranian disputing the election result.

Mark Colvin kicked off the discussion. Colvin was an ABC foreign correspondent and in Iran at the time of the original Islamic Revolution 30 years ago. He said the slogans on the street “Marg Bar Amrika” (Death to America) have now been changed to “Marh Bar Diktator” (Death to the dictator) as protesters turned against their own government.

Colvin said Iran’s so-called Twitter revolution began abroad. Americans angry will the lack of coverage of unfolding events after the disputed election began posting comments using the hashtag #cnnfail. The 24 hour broadcaster had pushed out the official Iranian line that Mahmoud Ahmadinejad had won the election but failed to report on the disputed fairness of the ballot. Iranian authorities expelled the reporters of other broadcasters, such as the BBC for daring to cover the growing unrest on the streets of Tehran. Colvin said that cnnfail became a symbol for what was wrong with old media and Twitter began to take centre stage as people sought out alternative sources of information.

There were a lot of people purporting to give eye-witness accounts. Colvin used his knowledge of Iranian and journalistic nous to verify what was trustworthy and what wasn’t. In Australia and elsewhere he quickly became acknowledged as an expert on the topic. However, he acknowledges “Twitter didn’t really achieve much at all inside Iran.” The Social media buzz gave the protesters a sense that their protest was worth persisting with but it also helped spread rumours, false pictures and inflated protest tallies. Colvin said the revolution was defeated but there were two unexpected benefits: it made the people of Iran human in western eyes and it helped Iranians see that they were not alone. “The pretence [of religious rule] has been stripped away, and part of what did that was created by Twitter, social media, and the world wide web,” he concluded.

Jason Wilson also believes the revolution said more about Twitter than it did about Iran. Wilson said it was amazing to watch how people in Australia and elsewhere discussed the issue and invested emotionally in it, through the medium of Twitter. Wilson said it was an “intense” experience unlike any other he had witnessed in the web2.0 world. But focusing on Twitter alone underestimates the influence of the Iranian blogosphere, he noted. Wilson said the blogs were a crucial space for dissent and debate and responsible for getting the protesters out on the street. Facebook groups and old fashioned word-of-mouth also played a big role.

The Iranian experience also showed some of the potential flaws of Twitter. It was all too easy, said Wilson, to retweet something rather than check out its accuracy. The hype around Twitter also disguises the fact that its effect in Iran was overstated and its user base exclusive. Ahmadinejad’s rural and poor constituency (as subsequently confirmed by Leadbeater et al) are “the last people who are likely to fish up on Twitter” and therefore without a voice in the west. “We need to be reflexive about the nature of [Twitter’s] networks when we think about this platform as a source of information” Wilson concluded.
Posted by Derek Barry at 1:22 am

Who said that Twitter was a factor inside Iran? No, social networking was important because it allowed Iranians to get their stories OUT of Iran, and allowed Nico Pitney to crowdsource the translations. Sounds like someone was taking down a straw man.