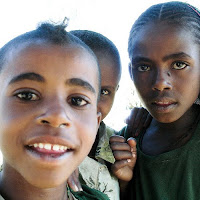 Britain announced the release yesterday of a food package of $316 million (US) to support the provision of basic services, social protection and humanitarian assistance in Ethiopia. The UK Minister of State for International Development, Gareth Thomas made the announcement on a visit to Addis Ababa saying there was a “robust mechanism” to make sure that the money is used as intended. This means paying close attention to political developments and the regime of Meles Zenawi who has been Prime Minister since 1995 and de facto leader since 1991. (photo credit: Turkairo)

The British bequest came two months after the World Bank signed two financing agreements amounting to $65 million for tourism development and enhance agricultural productivity. The first agreement for $35 million will finance sustainable tourism development projects and the remaining $30 million is set aside for agricultural projects. The World Bank Country Director said they would assist Ethiopia to tap its rich resources in the agriculture sector and encourage it to become self-sufficient in food production.

The need has become urgent as Ethiopia teeters on the verge of another debilitating famine. This is Ethiopia’s fourth successive year of lack of rain and when the rains do come it is often in the form of torrential showers causing floods and landslides. While the country has recovered from the disastrous 1984 famine (during the reign of Dictator Mengistu), some of the country remains particularly exposed, especially the far eastern region bordering war-torn Somalia. The conflict has created a refugee crisis and disrupted food production making already poor people even more vulnerable. The Zenawi government said the number in need of urgent assistance during the period October to December 2009 has increased from 4.9 million people to 6.2 million.

The British envoy made no mention of the famine in the Horn of Africa in his visit or Zenawi’s role in it but others have not been so coy. Writing in The Times last month, Sam Kiley noted the drought is the region’s worst in 47 years but foreign aid was not helping. On the contrary, said Kiley, it was “the principal reason for Africa’s accumulated agony.” Kiley quotes the Oxfam paper Band Aids and Beyond, which says that between 70 and 90 per cent of all US aid to Ethiopia has been food. But while the US was feeding the country, Ethiopia spent billions on a debilitating war with neighbour Eritrea. Riley says that only education can stop the vicious cycle of dependence.

African researchers Julian Morris and Karol Boudreaux agree with Riley that Ethiopia has not dealt adequately with the risk of famine. Writing in Business Daily they say the lack of rains are common to other parts of the world where they “routinely face droughts yet avoid famine.” Global deaths from drought-related famines have fallen by 99.9 per cent since the 1920s. The reason for this is specialisation and trade which increased food production and enabled vulnerable people in drought-prone regions to diversify. But the planned central economies of countries such as Ethiopia have provided no incentives to improve the land.

Under the 1995 Constitution, Ethiopian farmers cannot own their land. This means they cannot use mortgages for capital investment in machinery, seeds, fertilisers or irrigation. The net result is that farmers sub-divide their properties leading to environmental degradation and lower crop yield. This is exacerbated by government policies restricting movement to cities. The end result is a crippling cycle of forcing people to remain smallholder farmers, denying them opportunities in cities, compelling them to migrate and making them ruin the land through subdivision. Not everyone agrees that Africa should be judged by western lights. Nevertheless The Times and Morris & Boudreaux, present persuasive cases that Ethiopia’s famines are caused by bad government policies, not bad weather.
Posted by Derek Barry at 12:48 am