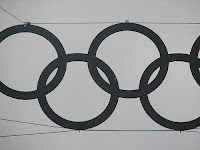 A new report into Australian sport has blasted the idiotic obsession with the Olympic medal count and said it has not resulted in improvements at grassroots level or done enough to combat obesity. The Independent Sports Panel presented The Future of Australian Sport to the Minister of Sport Kate Ellis today to a predictable backlash from the vested interest of Australian Olympic Commission head John Coates. The Crawford report (named for its chair businessman David Crawford) dismissed the AOC call for an extra $100 million to ensure top five status in the 2012 medal count as "not an appropriate measure of Australian performance.” Instead it calls for funding to be re-routed towards grassroots participation and recommends a reform of Australian sporting institutions. (photo credit: Will Palmer)

As Crikey notes many Olympic sports have minimal community participation compared to popular sports like netball and cricket. Yet the Olympics has been a central focus since the 1976 Montreal Games when Australia came away without a single gold medal. Most of the 2007 $90 million federal sports budget was spent on Olympic events. But the Crawford Report says there is so little accounting or accountability in Australian sport that it is impossible to say how much is spent, and to what effect.

It says the only data available is 2000-2001 ABS figures which found Australia spends $2.1 billion on sport. 90 percent of this figure was spent by state and local governments for the upkeep of sporting facilities and participation. Yet there were no performance measures for community sport that matched the overblown Olympic medal count indicators. The report said elite performance in non-Olympic sports and the general health and fitness of Australians need also to be considered in determining the success of Australian sport.

A re-assessment of sporting priorities is necessary, says the report. 80 percent of the commonwealth $90m budget is spent on the Olympics. This means there are some ridiculous discrepancies. Archery gets more money than Australia’s national game of cricket. Water polo gets more money than golf, tennis and lawn bowls combined. This is particularly problematic as these three sports are considered “whole of lifetime” contributors to preventative health care.

Meanwhile the cost of Olympic medals has never been adequately scrutinised. The report estimated each gold medal costs about $15 million with another $4 million for each silver and bronze. Yet there is no evidence that the Olympics lead to higher sports participation. The cost of medals is only likely to increase as other countries invest heavily in their own Olympic programs, often based on Australia’s own successful Institute of Sport model.

The AOC has requested an additional $100 million in funding to maintain Australia’s “top five” medal status. But the stupidity of this target is reflected in the medal discrepancies that favour individual events rather than team events. For instance, there are just two golds in hockey and basketball, but there are 16 in canoe/kayaking. Yet it is the team sports that are far more important to society as a whole. “If we are truly interested in a preventative health agenda through sport,” said the report, “then much of [the federal sports budget] may be better spent on lifetime participants than almost all on a small group of elite athletes who will perform at that level for just a few years.”

The Crawford Report was correct in suggesting Olympic spending was an outrageous waste of money purely to assuage the country’s international inferiority complex. And if there was any doubt the report was correct, it was removed by Coates himself with his nonsensical description that “it was un-Australian to settle for second best”. Coates called the report “disrespectful” and claimed Olympic funding was “vitally important to the nation”. He could, of course, offer no proof why this was so important other than to keep his own gravy train running. Crawford is correct; it is time to ditch the stupid fascination with the television news-friendly medal counts – they do little more than give the nation a few moments of vicarious pride every four years. It is time to better spend the money on the work-a-day sports that get people out of their armchairs for more than just a cheer.
Posted by Derek Barry at 1:04 am

Spot on mate. The Olympics is nothing but a gravy train. Same thing every time - the winning city wins with a low ball price quote, which skyrockets, when it's too late too pull out, leaving taxpayers to foot the bill, and you can't really get into the events, cos you don't know who's doping. Absolutely surreal freakshow, which has nothing to do with sport.