Sri Lanka starts to recover from its major flooding 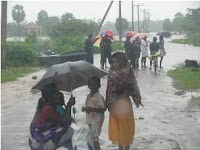 As Australia commences the clean-up from its devastating floods, world attention is finally moving to other major floods zones across the world. One of the worst hit is in Sri Lanka where flood waters are finally starting to recede in the worst-hit areas in eastern and northern-central parts of the island. Water levels are falling but monsoon conditions will last until mid-February. Low lying areas in the Districts of Batticaloa, Ampara, Trincomalee, Kurunegala, Anuradhapura and Polonnaruwa were flooded due to torrential monsoon rain from Saturday, 8 January with up to 300mm falling daily in some parts for five days of intense rain. More than a million people were temporarily displaced by the rains that killed at least 43 people. (photo:Sri Lankan disaster management centre)

Yesterday the country's disaster management centre reported over a million people were affected. As the flood waters recede people have started to return home and 51,423 displaced people remained in 137 camps. This is adding to an already difficult situation in the north where 20,000 internally displaced persons remain in Government-run camps since the end of the Tamil Tiger conflict in 2009.

UN Assistant Secretary for Humanitarian Affairs and Deputy Emergency Relief Coordinator Catherine Bragg will arrive in Sri Lanka tomorrow on a three day mission to supervise relief operations and to launch an international appeal for funding on 20 January. Bragg said her mission would highlight Sri Lanka’s humanitarian needs and she would advocate on behalf of the most vulnerable. The UN said it supported the Sri Lankan Government as it provided emergency supplies such as safe drinking water, food, sanitation and emergency shelter.

The floods have likely destroyed at least half of the season’s harvest in the eastern province, will also have a severe impact on agricultural livelihoods in a region still suffering the effects of the 2004 tsunami and recovering from the decades-long conflict. Over 200,000 acres of paddy cultivation have been completely destroyed and Disaster Management Minister Mahinda Amaraweera said today food prices would rise after the floods destroyed rice and vegetable crops. "We have a buffer stock of rice that is good for three months,” said Amaraweera. “That means there will be no immediate impact on the price of rice, but vegetables are already going up in price.”

Meanwhile many roads were impassable for the five days of heavy rain. According to a UK Foreign Office travel advisory some access roads to the east of the country are impassable. Areas in the central province such as Kandy, Nuwara Eliya and Badulla have experienced earth slips due to the rain. Drinking water is now scarce in the region and there is a large danger of water-borne diseases.

Sri Lankan aid workers say there could be outbreaks of dengue fever and cholera and buried landmines left over from the county’s long civil war may have become dislodged by flood waters. UN humanitarian coordinator in Sri Lanka Neil Buhne told AlertNet basic aid was still required and health risks were high. "A lot of people affected were quite poor to start with and now they don't have much, so there is a serious need to support them when they move back," Buhne said. "We are particularly concerned about food as these communities are pretty vulnerable and their food stocks have been destroyed so their usual source of income won't be a source of income for a while."

In the eastern town of Kattankudy, hundreds of flood victims besieged a government office yesterday complaining about unfair distribution of emergency food aid. The angry crowd attacked three officials in protests. “Officers were called in and we managed to bring the situation under control," said a local police spokesman. "A decision was then taken to distribute aid through cooperative stores rather than government offices."

The capital Colombo has been unaffected but some media including the Christian Science Monitor are hopeful the floods will be an opportunity to aid the reconciliation process with the Tamil north. In his initial tour of flood-hit areas President Mahinda Rajapaksa visited Singhalese farmers but ignored Tamil areas. However with army troops rescuing civilians, distributing food and building temporary shelters, Rajapaksa said the government was sparing no expense. “The relief operations are going ahead and I have told the officials to ensure that there are no delays in distributing aid.”
Posted by Derek Barry at 9:58 pm