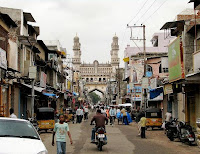 A little known feud over the possible creation of a new state in India has American media worried over the ramifications to US interests. Bloomberg has reported India deployed extra police to Hyderabad yesterday “home to offices of Microsoft Corp. and Google Inc” ahead of the release of a parliamentary report (pdf) on recommendations to create a new state. The report is likely to turn down turn statehood leading to possible violence which in turn has US investors worried about high-tech interests in the city. (photo of Hyderabad by McKay Savage)

Hyderabad is currently the capital of Andhra Pradesh, the country’s fourth largest state by area and fifth by population with 76 million people on the eastern seaboard. Hyderabad is also capital of Telengana, one of Andhra Pradesh three provinces. For 50 years or more there has been a large secession movement for Telengana centred in Hyderabad. The movement has been resisted by the other two provinces because Telengana is the richest of the three provinces with the state’s only international city and providing 70 percent of the state’s wealth. Those in favour are using precisely the same reasons to promote the split.

For political expediency, the state-ruling Congress Party initially voted in favour of Telengana but has been speedily backtracking as extremists on both sides have become more violent. The status of Hyderabad is at the heart of the dispute. It has become a Jerusalem, claimed as the capital by both sides. To complicate matters, Andhra Pradesh is a swing state nationally and its 42 members have been instrumental in successive Congress victories in New Delhi in 2004 and 2009.

Telengana has ten of Andhra Pradesh's 23 districts. Britain never administered the region and it was governed instead by as the Nizam’s princely state of Hyderabad from 1719 until the end of the Raj in 1948. The Nizams had their own army, railways, postage and other insignia of independence and were one of just three princely states out of 562 that resisted Indian overtures to join the new union. The Muslim rulers took weapons from Pakistan but India launched a brutal four-day Operation Polo (so called because Hyderabad had more polo grounds than anywhere else in India). Polo crushed the Nizam resistance with many casualties in what was euphemistically called a “police action”.

In 1956, India attempted to re-organise its states on a linguistic basis. Legislators merged the Telegu-speaking parts of Hyderabad with the Telegu-speaking parts of Madras to form Andhra Pradesh with Hyderabad city as capital. From the 1960s onwards opposition movements grew to overturn the merger based on claims of neglect and economy superiority of Madras. Demands grew stronger after India created three new states (Jharkhand, Uttarakhand and Chhattisgarh) in 2000.

The Economic Times said the Justice Srikrishna Committee is now looking at six options to deal with the Hyderabad problem. Its most favoured option is Number 6: creating a regional council for Telengana within the existing boundary. This one, they say will satisfy the most people. It would also “take care of the uncertainty over the future of Hyderabad as a bustling educational, industrial and IT hub/destination” that so worries Bloomberg.

When released, the full report may trigger further violence from separationist hardheads but Hari Kumar at India First-Hand doubts if secession would make life better for any of Andhra Pradesh’s people. Hari said the people of Chhattisgarh, Uttaranchal and Jharkhand were no better off today than they were 10 years ago. “Complaints of neglect and other similar issues are not reasons for creating a new state or country,” Hari said. “The solution to issues like neglect is to make sure that the system is more transparent.”
Posted by Derek Barry at 10:50 pm