Return of the Bread Riots: Egypt spinning on its history 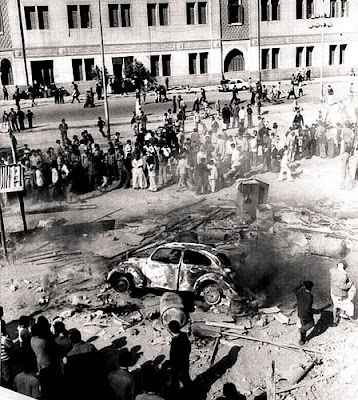 (photo of Egypt's bread intifada of 1977 from libcom.org)

There is a good reason why only Israel gets more American military money than Egypt. Both are vitally important countries at the centre of the world’s political, economic and religious fault lines. Stopping the two from tearing each other's throat has been a vital plank of US foreign policy for 40 years. US religiosity will keep Israel, the home of the bible, front and centre of their overseas donations. Americans may be less keen to celebrate the role of next door Egypt in the lives of Moses, Joseph and Jesus but their Government realises the importance of Cairo.

Though it was in decline by Jesus’ time, Egypt was an extraordinary civilisation in the ancient world. Alexandra had the largest library in the world and the Pyramid of Cheops was the tallest building in the world for 3800 years until one of the country's eventual colonial masters built Lincoln Cathedral in 1311.

The pyramids of Giza were cathedrals of their own and part of a rich culture. Egypt’s brilliance began after it mastered irrigation of the Nile and established a system of agriculture that built the foundation stones of western science: writing, mathematics and medicine. Its art and architecture were legendary and the pyramids were the result of advanced quarrying, surveying and construction techniques.

It was also created by slave labour and the Greeks inherited the Egyptian acceptance of slavery in its sense of democracy. This failure to see how the proper division of labour was crucial to a human’s sense of self importance would haunt Egypt to modern times. A succession of rulers including Romans, Arabs, Mamluks, Turks, an Albanian named Muhammad Ali, and later the English and Americans made sure it was the bondholders not the bonded that kept control in the country.

General Abdel Nasser was the first Egyptian in thousands of years to properly lead his country. He tried to steer an independent course but his attempt to nationalise the Suez Canal brought down the wrath of the UK, France and Israel in an opportunist war that crippled his state and brought the problems of Gaza to world attention. Israel's continued nagging killed him of a heart attack in 1970.

Vice President Anwar Sadat was Nasser’s logical successor. He was a senior member of Nasser’s Free Officers group that overthrew the hated royal regime and the one who announced Farouk’s removal on radio. Sadat was an astute president. When the Russians refused his request for more arms, he retaliated by agreeing to American terms for a peace settlement with Israel. He also courted senior Christian religious figures such as the Pope and Billy Graham to humanise himself with American voters. His visit to Israel in 1977 cemented his status as a senior Arab leader and earned him a Nobel a year later, even if it brought on the wrath of most of the Arab world.

But in the same year he went to Jerusalem, there were riots in Cairo. Sadat like other rulers before him tolerated no dissent on the home front and like Nasser he never put himself up for election. His economic policy “infitah” aimed at liberalising the economy saw cuts to subsidies to foodstuffs. The cuts to flour, rice, and cooking oil subsidies triggered the bread riots of 1977 forcing Sadat to backtrack. Despite its oil money, Egypt was caught between the demands of its people and the international bankers.

With rage growing over his Israeli peace deal, his opponents attempted a coup that was defeated by Sadat’s intelligence organisation. Their crackdown missed one key opposition figure Khalid Islambouli who murdered Sadat in a victory parade in 1981. Egypt executed Islambouli while the Ayatollah’s Iran celebrated him as a martyr. Sadat’s death brought his deputy Hosni Mubarak to the presidency where he tentatively remains to this day.

Mubarak kept to the Sadat agenda. He survived six assassination attempts and got his payday in 1991 when the US and its allies forgave Egypt $20 billion in debts for joining the war to remove Saddam Hussein from Kuwait. By then Mubarak was able to play the “politically stable” card as a long-term leader in a country with few changes of power. The west was prepared to overlook it was a lack of democracy that led to this stability, in order to “deal with” the Egyptian regime.

Its oil industry, tourism and shipping made it a safe bet for western business that showed (just as it does with China, Saudi Arabia and elsewhere) it was prepared to export anything to the country except its political ideas. Mubarak held elections in 2005 but with the opposition Muslim Brotherhood banned it was a sham. The real source of his power was control over the media and enforcement by police intimidation.

As long as oil prices were high, Muburak could buy his way out of trouble. But the global crisis has hit Egypt hard with a triple whammy: high unemployment, rampant food inflation and low wages. The fuel was there and needed just a spark. That was provided in near-by Tunisia which exploded into riots against a similarly corrupt long-term leadership.

When Mohamed Bouazizi set himself on fire it was as if millions across the region shared his pain. His martyrdom set off a wave of discontent against Egypt and countless similar autocratic rules across the Arab world. The monied West which was happy to accept these countries' sacrifice of lack of democracy to keep the dollars rolling now finds itself in an awkward position of exposed hypocrisy and redundancy. They can only watch as Mubarak and other dominoes wobble and fall in a feverish show of people power. For once, the West can no longer control what will happen next.
Posted by Derek Barry at 11:57 pm

Very interesting, isn't it. I hope that things end up okay for the Egyptian people and the region.