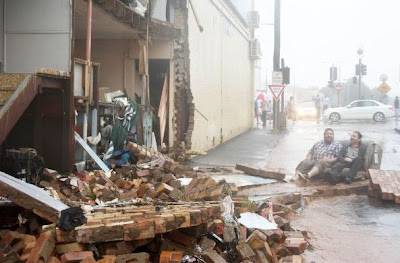 Three-quarters of Queensland has now been declared a flood disaster zone - an area about 1.3 million sq m. This is roughly the size of Peru, the world’s 20th largest country. The widespread devastation is finally heading to Queensland’s largest population centre, with a major flood predicted to peak on Thursday. And Brisbane has had it coming for some time.
(picture of flooding in Ipswich today courtesy of the Toowoomba Chronicle)

It was all so different in January 2010 when a parched Brisbane had 40.2mm of rain for the entire month. It was the back end of a typical 10-year El Nino Southern Oscillation weather pattern that was about to break spectacularly. February (272mm) and March (162) had high falls. The back end was worse still - October had 306mm and December 479mm.

12 months on and La Nina now in her element, things have changed drastically for the city. In all 1658mm fell in 2010 (the highest since 1974) and all the signs are for a repeat performance this summer. After a few dry days to see in the new year, 41.8mm fell on Thursday. There was another 35.6mm on Friday and 23mm over the weekend. Then yesterday, the monsoon hit and dumped an incredible 110.8mm in 24 hours – three times what fell in the entire month of January 2010.

Brisbane’s rainfall pattern was repeated through the southern and central parts of the state. After getting a drenching from October through to Christmas, the soaking catchments were unable to deal with the deluge dumped on Boxing Day in the aftermath of Tropical Cyclone Tasha. On 27 December (the day I tried unsuccessfully to return to Roma after spending Christmas at Maryborough), flooding broke out in several parts of the state. Dalby and Chinchilla, towns I needed to get through, went under. So did Warwick. All three towns are in the Murray-Darling basin and they sent walls of floodwaters to downstream centres such as Condamine, Surat and St George. In relatively flat country it could take many more weeks for it to inundate parts of NSW further south.

North of the Great Dividing Range, there was havoc on two other river systems, the Burnett and the Fitzroy. On the Burnett, towns like Eidsvold, Mundubbera and Gayndah all suffered flooding and the waters finally made their way to Bundaberg where streets around the iconic distillery all went under. Further north still, tributaries of the Fitzroy started filling up. The Dawson River rose so high, the entire 450 people of Theodore had to be airlifted to safety. The Nogoa River reached record levels exceeding waters in Fairbairn Dam over 100 percent capacity. The dam could not save the nearby town of Emerald from intense flooding.

The swollen Nogoa, Dawson, Comet and McKenzie come together to form the Fitzroy in the largest river catchment to flow into eastern Australia. Sitting near its mouth, the large town of Rockhampton was the next Queensland settlement to bear the flood burden with the town closed off and the Fitzroy peaking around 9.4m last Wednesday.

Still the rain kept coming across Queensland. It was the Mary River’s turn on the weekend, a fourth river basin swelling up causing major flooding in Kilkevan, Gympie and upstream at Maryborough. Then the focus turned back south with the news of Toowoomba’s horrific flash flooding yesterday so graphically captured in this incredible amateur video:


Torrents of water gushed through town sweeping cars and vegetation aside. Much of the water rushed down the ranges below Toowoomba and into the vulnerable Lockyer Valley below. Small towns like Withcott, Murphy’s Creek and especially Grantham had no chance as an 8-meter high “inland tsumani” rushed by, tearing houses apart and stacking cars on top of each other leaving many dead.

Back up on the ridge, towns like Warwick, Dalby and Chinchilla were getting ready to face the floodwaters again – this time possibly even higher than before. I saw myself the Balonne River at Surat 6kms wide on Saturday, after the first flooding. It is receding now but can expect to get even bigger with the next lot of floods predicted to arrive on 18 January. 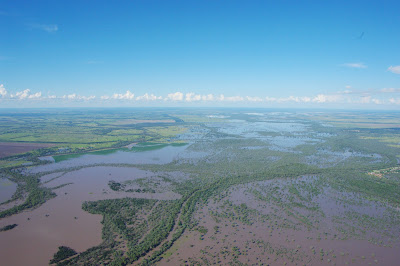 Brisbane, with a quarter of Queensland’s population, has been watching the growing the flood crisis with horror as it got steadily closer. The massive Wivenhoe Dam, built as a lesson from the devastating 1974 floods, was straining to keep its waters sitting at a seemingly impossible 175 percent full. It is pumping record amounts of water through its five gates but is still increasing. Meanwhile that released water is heading towards Ipswich and Brisbane. Allied to heavy local rain and king tides, it is preparing a muddy cocktail for the capital. Worse still if the waters ever overtop the dam, it would produce a deluge that would make the event in Grantham seem like a picnic.

That is the worst case scenario. But even more sober predictions make grim reading for Brisbanites. Premier Anna Bligh has conceded the effect will be the city’s worst flood since 1893, with up to 40,000 properties at risk of being affected when the Brisbane River peaks on Thursday. Evacuation centres have been set up and the CBD shut down adding the already heavy economic impact of the crisis. It was no surprise to hear the Aussie dollar fell 2 cents today against the greenback.

Out here in Roma we are far from the world’s stock markets and surprisingly free from flooding this time round. At the top of the Murray-Darling basis there is no upstream water to worry about and the rains have mostly missed us out. Nearby Surat is a different story but there is now a common thread here as both towns become isolated due to the flood crisis to the east. Supermarket shelves have emptied of basics and there is no chance of re-supplies for possibly weeks to come. This is the “invisible flood” where businesses suffer despite having no waters running through their premises. It makes for less emotive television but the impact is almost as severe. The Maranoa local government region is not yet a flood-declared council so it misses out on many types of flood relief. Many other western regions will face similar issues. Dealing with these issues will cause authorities many headaches in the months, and possibly years to come.
Posted by Derek Barry at 9:50 pm

Did you take the picture ?

I took plenty out here, Earl but neither of those two.