'Neath her hind feet as rushing on his prey, The lordly Lion greets the God of day.'
- Aratos 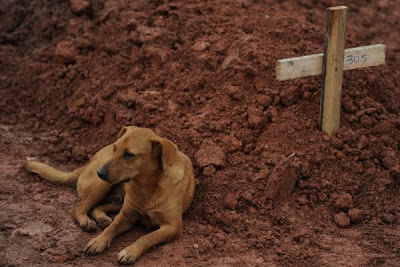 This dog is Leao. His custodian Cristina Maria Cesario Santana died in the landslides in Brazil that killed hundreds a week ago. Leao has been beside her grave for two days waiting for his owner to return. Santana and Leao lived in Teresopolis near Rio de Janeiro where the latest human death toll from the landslides is 785 with two in five from Teresopolis.

Founded by the Swiss burghers of Friburg in 1819, the nearby city of Nova Friburgo fared even worse with 365 deaths. Both cities are in the Região Serrana of Rio de Janeiro state in south eastern Brazil some 60km north of Rio itself. Região Serrana means mountain district and many dwellings in the region are exposed to landslide hazards due to the steep terrain. On 11 January it started to rain in the region, heavily. In Teresopolis it rained 144mm in 24 hours, more than the average for the month of January.

The downpours caused rivers to break their banks and triggered landslides. It knocked over bridges, houses, churches and the entire downtown area of Novo Friburgo. 6,000 people were made homeless and another 8,000 had to leave their houses and go to shelters while authorities assessed the risk of more mudslides. The death toll rose to make it Brazil’s worst ever natural disaster. Further rainfall over the weekend slowed rescue efforts. Army troops, police forces and thousands of volunteers searched for survivors and recovered bodies while air force helicopters transported food and water to families stranded in rural areas without communications.

The San Antonio river burst its banks, submerging buildings, while the rainfall set off several mudslides sending entire shantytowns washing through the city streets below. Brazil’s saturated urban centres are littered with poor-quality homes built informally on precarious inclines. As the Christian Science Monitor said the correlation between Rio’s favelas and its jagged hills is so strong that morro (hill) is a common synonym for “slum,” and asfalto (asphalt) stands for the higher-quality neighbourhoods below. Teresopolis Mayor Jorge Mario Sedlacek called it a huge catastrophe. It was, but it was a human-made one.

According to watchdog group Contas Abertas, the federal government budgeted $263m for disaster prevention last year but only spent $82m. And only 1 percent of that went to Rio state while a whopping 54 percent went to Bahia, a state that had no major disasters because the minister in charge of disbursing funds was running for governor there. It is part of a long tradition of political corruption in Brazil.

While little is spoken about corruption, even less is known about Cristina Maria Cesario Santana, a citizen of Teresopolis. She was one of the town’s 138,000 inhabitants and she was one of 316 people who died there. Television images from the town showed cars submerged by water, buses and trucks with water up to their windows, homes destroyed and tearful survivors surveying the carnage. One resident described the scene as being "like a horror film" and said she saw a baby "carried away by a torrent like a doll" as the child's mother tried in vain to save it. Christina presumably was also carried away in the torrent. Her tan crossbreed dog Leao somehow survived. And his picture mourning Cristina has reverberated across the media world.

The promises of new Brazilian president Dilma Rousseff have reverberated less but are more important in the long run. Rousseff pledged a swift relief effort but will have to confront major flaws in emergency planning and disaster prevention. She said the disaster was caused by decades of lax oversight by municipal authorities who allowed poor people to build houses on hillsides vulnerable to landslides. “Building houses on high risk areas is the rule in Brazil, not the exception,” said added. “You have to get people away and into secure areas. The two fundamental issues are housing and land use and that involves putting proper drainage and sewage systems in place.” But many people living in flood-prone areas say they have nowhere else to go. Like Leao, the problem of the favelas is not going to go away any time soon.
Posted by Derek Barry at 9:14 pm