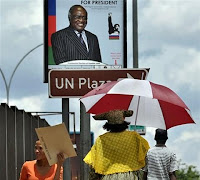 Namibia is still waiting for confirmation of its election results three days after voting completed. The country’s presidential and national assembly elections took place over Friday and Saturday 27–28 November 2009. And while the first ballots came in on Sunday, the final result will not be known until Wednesday. Fourteen political parties participated in the elections with the ruling party, South West Africa People's Organisation (SWAPO) overwhelming favourite to win over its main challenger Rally for Democracy and Progress (RDP). Meanwhile SWAPO’s Hifikepunye Pohamba is seeking a second five-year term as president. But social media is casting a long shadow over the election led by the African crowd-sourcing tool Ushahidi. (photo credit: Agence France Press)

The former rebel movement SWAPO has dominated Namibian politics since the nation’s independence from South Africa in 1990. They won a landslide in the last election five years ago but are expecting a closer result this time. The opposition RDP is a new party which broke away from SWAPO two years ago. The party headed by former foreign minister Hidipo Hamutenya is hoping that voters have had enough of SWAPO after a series of corruption scandals. These include the bribery of Chinese President's Hu Jintao's eldest son over a $56 million deal to supply scanners to Namibia's ports and airports.

However with early results suggest that SWAPO will be heading for a comfortable victory, opposition parties have begun suggesting the election was rigged. Four opposition parties including the RDP said the Namibian electoral commission had provided different figures for the number of people on the voters’ roll to each party. They also complained that their agents were barred from manning polling stations and supposedly indelible ink used to prevent double voting could be washed off. The four parties said in a joint statement their concerns “may compromise the outcome of the election.”

The National Society for Human Rights has also been highly critical of the electoral commission. The human rights watchdog claimed the voters' roll had a discrepancy of 180,000 voters including double-listed constituencies and voters as well as under-age people. The commission disagreed and revoked its status as an election observer on Wednesday deeming it “not impartial”. The Namibian High Court ruled to have the observer status reinstated barely hours after polls opened on Friday although the NSHR were still complaining of continued harassment as they tried to monitor the polls.

According to Global Voices Online, the NSHR were prominent among political parties and non-governmental organisations who used a number of social media tools to campaign, monitor and report on the elections. The NSHR used the African crowdsourcing tool Ushahidi to monitor the poll. Ushahidi was a tool created in the aftermath of disputed Kenya's elections in 2007 to collect and map eyewitness reports of violence. Ushahidi means testimony in Kiswahili (East Africa’s lingua franca) and as explained by Riyaad Minty to Sydney’s Media140 conference last month, the tool was also used by Al Jazeera to crowdsource crisis mapping during Israel’s 2008 invasion of Gaza.

In the Namibian election, the NSHR used Ushahidi to collect reports about incidents of fraud, undue influence, intimidation and violence. Eye-witnesses sent in their reports via SMS, email or by filling out a form on the website. At the time of writing there were 64 reports on the site. Examples include instances of presiding officers denying observers taking pictures of electoral fraud and a human rights activist was arrested for “insulting the former president”. While these reports are unverified, Ushahidi is showing itself to be a simple but formidable tool for the broadcasting of grass-roots activism in a continent with poor media coverage. It may yet prove to be a game-breaker in the torturous world of African politics.
Posted by Derek Barry at 9:54 pm