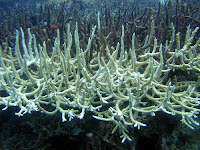 While Australian politicians and the media continue to lie or downplay the effects of human-caused climate change, Australian scientists continue to methodically pile up the evidence to the contrary. A new scientific paper has not only stated that the world’s coral reefs including the iconic Great Barrier Reef are in irreversible decline due to increasing carbon dioxide in the atmosphere but worse still, if these emissions are left unchecked they could cause a mass extinction event. This was the gloomy prognosis of a paper published in October’s edition Marine Pollution Bulletin. The paper says today’s co2 levels of 387 parts per million is enough to cause catastrophic mass bleaching of coral reefs given a time lag of ten years. (photo by mattk1979)

Written by ten Australian, British and Kenyan scientists, the paper entitled “The coral reef crisis: The critical importance of <350ppm CO2” states that if levels are allowed to rise to 450ppm by 2020 as the best effort proposed by the Copenhagen Accord then “reefs will be in rapid and terminal decline worldwide”. The scientists say this will be inevitable due to a synergy of mass bleaching, ocean acidification and other environmental impacts. But worse is to follow should levels reach a doomsday scenario of 600 ppm (not impossible given current unchecked rates of growth). In that case, a domino effect will occur affecting many other marine ecosystems. The paper states baldly that anthropogenic CO2 emission could trigger “the Earth’s sixth mass extinction event”.

Because reef systems have existed for 240 million years, they provide an unequalled window into the effects of climate change in geological time. Yet astonishingly scientists have found no parallel in the past with today’s conditions. “We are in unchartered waters,” say the scientists. Already 20 percent of the world’s reefs have been destroyed and another 35 percent is seriously threatened. Currently mass bleaching events are associated with El Nino weather patterns and normally occur even four to seven years. But now they are happening annually. Coral has a high dependence on light and temperature and even slight changes in either factor can cause irreversible damage.

There are no recorded instances of mass bleaching before the 1970s. Temperature-induced mass coral bleaching was first recorded in 1978 when co2 levels were 336 ppm. Given a ten year time lag, the problem probably began in 1968 or thereabouts when co2 levels first exceeded 320 ppm. By 1983, co2 levels had reached 340ppm and this was enough to cause a mass bleaching of 10 percent of the Great Barrier Reef and two-thirds of all inshore reefs. Another mass bleaching event in 1998 with CO2 levels at 365 ppm killed 16 percent of coral globally. Further events in 2002 and 2005 characterised a new phase of decline and diminishing complexity of the reefs.

The paper says by the time CO2 levels reach 450 ppm coralline algae will no longer be able calcify which will make coral brittle and subject to collapse. Reef building processes will be severely diminished or cease entirely. Rising sea levels, an increasing number of high intensity storms, impacts from fishing and deterioration of the water quality will exacerbate the effects of mass bleaching and ocean acidification.

Reefs are resilient and usually bounce back from bleaching events particularly if they are spaced many years apart. But as they become annual events and more intense, the capacity of the corals to regrow will decline. This is not helped by human factors such as water pollution and over-fishing. This reduces genetic diversity which in turn further hampers the corals’ ability to re-grow.
All the evidence suggests that reefs will be the first planetary-scale ecosystem to collapse due to rapid global warming. And while bleaching is confined to the reef, the impact acidification will be felt more widely. It could impact molluscs, crustaceans, plankton, fish, seagrass, mangroves, marine reptiles and mammals, and estuarine habitats.

The scientists say the speed at which events are happening give little time for evolution to take adaptive measures. It recommends some immediate remedial measures such as reducing the harvesting of herbaceous fish, protecting sharks and other top predators, managing water quality, and minimising “anthropogenic impact”. Given that Copenhagen failed singularly in that last task, hopes are not high the scientists hopes will be realised. “Only drastic action starting now will prevent wholesale destruction of reefs and similarly affected ecosystems,” concludes the paper. “Should humanity not be successful in preventing these threats from becoming reality, no amount of management or expenditure will save future generations from the consequences of our failed guardianship.”
Posted by Derek Barry at 9:30 pm

Thanks Derek. Another calm analysis.
I'm off to bed to cry myself asleep.
But hey! Why should I worry?
I'll be ready to fall off the perch naturally by 2030

Well. I *do feel sorry for your kids.

Perhaps there's something you can do?