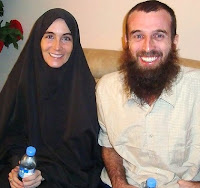 John Chase, the hostage negotiator in the Somali kidnap of Nigel Brennan and Amanda Lindhout has admitted they paid a half a million US dollars to secure their release. The Australian Brennan and Canadian Lindhout were released from Mogadishu last month after being held for 15 months and Chase was instrumental in getting the initial $2.5 million ransom demand per head down to the $250,000 a head that was paid in the end. Chase said the kidnappers had no political motives and were not related to the Islamic Courts Union that rules much of Mogadishu. (photo credit: Reuters)

A blog called Free Amanda Lindhout said last week the Canadian Government would send a plane to take Lindhout and her family back to Canada. However the Canadian Department of Foreign Affairs would not confirm this saying the family deserved privacy. Whenever she returns, it brings an end to a long ordeal she suffered in the name of getting the story of Somali refugees out to the wider world. Lindhout had worked in Iraq where she wrote stories about honour killings. She went to Mogadishu in August 2008 with Nigel Brennan. Brennan is a Brisbane-based photojournalist, who studied photography at Griffith University and a former photographer for the Bundaberg NewsMail newspaper.

On 23 August 2008 the pair were kidnapped in Mogadishu. Lindhout told Canadian TV they were researching a story about internally displaced people in Somalia. Many IDPs preferred the certainty of the camps to life in the war-torn capital. The journalists had been to a refugee camp the day before to interview IDPs and were going back to film for a second day. Their vehicle was ambushed and pulled to the side of the road. According to the pair’s local fixer and journalist Abdifatah Elmi the kidnappers opened the door of the car and brandished guns. They forced all three to get into their car and drove away from the scene very fast.

Within twenty-fours, Brennan’s parents in Australia got a call from the hostage takers. As Brennan’s sister Nicky Bonney described it, a voice identified himself as Aden, ringing from Mogadishu. Aden said he had Nigel and this was a ransom call for $1.5 million. A few hours later, Australian federal police turned up and directed the family to ask the hostage-takers a “proof of life” question. Bonney asked them, what was the name of their dog and the correct answer came back two hours later.

The Somali journalists union claimed they were being held in the north-eastern Mogadishu neighbourhood of Suqa Holaha by militias. After a month, Al Jazeera television showed footage of Brennan and Lindhout. They were accompanied by armed men, who identified themselves as the Mujahideen of Somalia. They accused Australia and Canada of helping to destroy Somalia, and demanded they end this policy.

In January, the hostage takers released the Somali journalist Abdifatah Elmi after 150 days in captivity. Elmi said his clan elders negotiated his release and that no ransom was paid. He said he was kept separately from the others and didn’t know their whereabouts. There was no further contact until May when Brennan and Lindhout made a five-minute phone call to an AFP journalist in Mogadishu saying they were in poor health and requested help from their governments. A day later Australian Foreign Minister Stephen Smith asked for a media black-out saying public discussion could endanger Brennan's life.

The problem for Brennan and Lindhout is that they were freelance journalists. If they had been employed by a news agency, the employer would likely have had kidnap insurance and the situation would have been resolved quickly. But being freelance, they had no choice but to ask their governments to pay. Both the Australian and Canadian Governments refused citing their long-standing policy not to pay ransoms.

However this is not a hard and fast rule. What the Australian Government would agree was $250,000 which it was prepared to facilitate as payment to secure a release. This had to be described as an incidental cost and not as a ransom. The Australian and Canadian Governments set up a Nairobi task force but the kidnappers were not prepared to accept $250,000 a head. It was up to the hostages’ families to raise the rest of the money. The families got together and hired a hostage release and ransom negotiator with a proven track record of dealing with Somali kidnap situations. The contractor was John Chase, the managing director of crisis response with the AKE group. He said the kidnappers were criminal gangs who could be placated with extra money. Chase was not cheap at $3,000 a day. But the families raised funds with the help of Dick Smith and other businesspeople. Finally after 462 days of captivity, the hostages were released for half a million dollars each.

Writing in Online Opinion today, African scholar David Robinson went behind the trite "lawless since 1991" common media headline to show why Somalia is such a complicated place. There has been a long-standing post-colonial conflict between Ethiopia and Somalia for control of the Ogaden. During the Cold War both countries were courted in turn by the US and the USSR but the Somali regime found itself bereft of friends after the Soviet collapse. In 1991 Siad Barre’s rebel movement displaced the Government which led to the disastrous 1993 UN peacekeeping mission. The US lost 30 soldiers and more important lost its will to engage in Africa. The intervening years have seen an ongoing power struggle between the UN-backed Transitional Government and the fundamentalist but popular Islamic Courts. As Robinson says “Nigel Brennan travelled to Somalia to reveal its story; it is a story worth telling.”
Posted by Derek Barry at 8:47 pm