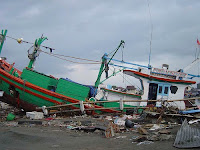 Incredibly, five years have now passed since the Indian Ocean tsunami struck on 26 December 2004. The scale of the devastation was immense and it occurred on a hemispherical scale. 230,000 lives were lost in 11 countries, five million people were affected and $5 billion of damage was caused by one of the largest earthquakes ever recorded. (photo by simminch)

The drama of the day started at 7am local time in Indonesia when an earthquake of between 9.1 and 9.3 magnitude struck the sea between the west coast of Sumatra and the small island of Simeule. The event lasted an unprecedented ten minutes tearing a massive rupture 1,600 kms long. Depending on who’s talking it was either the second or third highest magnitude earthquake of the 20th century. Either way it was immense. The shift of mass and the massive release of energy very slightly altered the Earth's rotation. It caused the sea bed to rise several metres displacing billions of tonnes of sea water in the process.

Because of the north-south 1,600km fissure caused by the quake, the greatest waves went east and west. It took about a half hour for the wall of water to reach nearest landfall on the Sumatran Coast. Northern Aceh was worst hit with waves rising 20 metres high and travelling almost a kilometer inland. Some coastal villages were devastated losing up to 70 percent of their inhabitants. In all 167,000 were killed in Indonesia and another 37,000 listed as missing. An estimated 655,000 people were made homeless.

After another hour, the waves hit southern Thailand and its west coast islands. The waves swept locals and tourists off the beaches. 8,000 people died in Phuket, Phi Phi and elsewhere and a similar number were injured. At the same time the westerly-heading waves slammed 10m high into the east coast of Sri Lanka killing another 35,000 people and it made over a million and a half people homeless. A further 68 people died in Malaysia. By another half hour, it was taking severe casualties in India’s Tamil Nadu and Burma. The waves demolished railways, bridges, telecommunications facilities and harbours. The salt water contaminated large tracts of rich arable land.

And still it kept coming. After another 90 minutes, the tsunami engulfed the low-lying Maldives killing 100 people and displacing another 20,000. And two and half hours later still – some six hours after the original quake – the mammoth waves made landfall in Somalia. 300 people died there with 50,000 made homeless and many more livelihoods lost as 2,500 boats were destroyed. Most of the deaths were caused by asphyxiation from the silt and sand within the “black water” of the tsunami.

A massive worldwide relief operation began almost immediately. The biggest ever peacetime launch of military relief effort arrived in Aceh led by emergency teams from Australia, India, Japan and the US. Apart from immediate medical needs, the biggest threat was secondary death from famine and disease. One of the most important early tasks in Sumatra was to provide purification plants and potable water. This was difficult in a region where the Indonesian army was hauling over a thousand bodies a day from the rivers. Forensic scientists were stretched to the limit to identify the deceased. The process was complicated by sweltering heat, inconsistencies in data collection procedures used in various countries, and jurisdictional challenges. Port, road and transport facilities also needed to be restored.

Undermining the recovery effort was the influx of aid workers and media personnel who consumed scarce resources, making the cost of living soar. There were at least 500 journalists and news crews in the affected zone. And the sensationalism of much of the reporting added to the trauma of the survivors. Aceh did eventually recover and the tsunami had one unintended benefit; it brought an end to the long running war between the Indonesian military and Acehnese separatists.

Dealing with earthquakes will always be one of the perils of living in geologically active Sumatra. As recently as October, over 500 people were killed and thousands trapped under rubble when a 7.6 magnitude quake struck West Sumatra. But it will never forget the events of 26 December, 2004. The psychological trauma of confronting 20 metre waves is too deep. As one 10 year old girl told AFP "Even if I wanted to, I couldn't forget. It's the same for my friends who survived.”
Posted by Derek Barry at 9:29 pm

Derek, since you wrote this I've had lunch on the beach in Mahabalipuram in Tamil Nadu and in Pondicherry. Both are beautiful places with no obvious remaining signs of devastation. Time passes and life goes on.