Nationalism: A study of Imagined Communities

In a major speech to celebrate the 60th anniversary of Indian independence Nobel laureate economist Amartya Sen has argued that nationalism is a double-edged sword. Sen said nationality was “universalising” and plays a role in uniting people. But he also said nationality is a major source of conflicts, hostilities and violence. “Nationalism can blind one’s vision about other societies and this can play a terrible part especially when one country is powerful vis-à-vis another,” he said. Nationalism, he concluded, is “both a curse and a boon”.

Sen’s points about the complexities of nationalism were borne out elsewhere on the planet. In Nepal, the rebels have gotten their wish to overthrow the monarchy. But their apparent avowal to Maoism could be undone by an equally strong desire to support Nepalese nationalism. In Scotland, optimistic nationalist fervour is on the increase in the wake of the “responsible actions” of the Scottish Nationalist Party since their victory in elections in May. Meanwhile the nationalistic stereotypes of Serbia were upended by the local version of Big Brother, where a boorish Kosovar Serb was quickly evicted from the program while a handsome Bosnian Muslim seemed likely to win.

Nationalism is one of the world’s most potent doctrines; it defines the right of a nation to exist independently based on some shared history, language or culture. The concept has been enormously influential. Millions have died in the twentieth century in the fight for nationalism and the nation state has become the fundamental building block of international relations. It is coded in the very name of the world organisation known as the United Nations.

Nationalism is a relatively modern concept. As late as 1914, dynastic states made up the majority of the world’s political system. One of the best books to look at the history and theory of nationalism is Benedict Anderson’s “Imagined Communities” (2nd edition - 1991). Anderson points out that every successful revolution since World War II has defined itself in national terms: China, Vietnam, Algeria etc. Anderson’s thesis is that the concept of the nation is the most universally legitimate value in the political life of our times. Yet despite this ubiquity, the concepts of nation, nationality and nationalism have all proved difficult to define and analyse.

Anderson’s solution is to define these terms as cultural artefacts. He defines the nation as an “imagined political community” inherently limited and sovereign. It is imagined because the nation’s members (regardless of how small that nation is) will never know of, or meet most of their fellow-members but each member shares a mental comradeship and image of their nation. Nationalism essentially invents nations where they do not exist. Yet each member is aware of the physical limit and boundary of the nation beyond which lies other nations. It is also sovereign as it is a product of the 18th century enlightenment which ended the concept of divinely-ordained dynastic realms. The most important quality of that nation is to be “free”.

It is the mental fraternity of this imagined bond that makes it possible for millions to die for, and kill for, such an idea. The nationalist imagining has many connotations with religion and shares with it an infatuation about death and immortality. Nationalism turns chance into destiny. I can say it is an accident that I am either Irish or Australian, but both Ireland and Australia are “eternal”.

The roots of nationalism can be traced back to the rise of print-capitalism in the 16th century. Prior to 1500, four out of every five books printed were in the ecclesiastical language of Latin. But in the wake of Gutenberg, the vernacular ruled. 200 million books were produced in the next 100 years as the book became the first mass-produced industrial commodity. But even the success of the book was dwarfed by the rise of the newspaper: the “one day best-seller”. The newspaper created an extraordinary mass ceremony in the newly rising mercantile class: a simultaneous consumption of news. The newspapers were written in a vernacular that only those of their language-field understood. They were the embryo of an “imagined community”.

As the influence of newspapers grew, the next major development in the history of nationalism occurred in the western hemisphere. Between 1776 and 1838, a whole series of Creole states emerged in the Americas which self-consciously defined themselves as nations. Latin American countries made the break from Spain because of the fear of lower-class insurrection as Madrid tried to introduce more humane laws on human rights and slavery. It fragmented into 18 nation states that corresponded roughly to the old viceregal administrative provinces. Meanwhile in North America, the advent of printer-journalists such as Benjamin Franklin became a key component of communications and intellectual life that spurred on anti-colonialism.

Meanwhile Europe was still dedicated to the barrier imposed by languages. Lexicographers, grammarians, and philologists were shaping 19th century nationalism. The leaders of nationalist movements in countries such as Finland and Bulgaria were writers and teachers of languages. State bureaucracies were on the rise which opened doors to people of varied social origins. The language of state pushed out obscurer tongues such as Irish and Breton to the margins. The print-languages were elevated and made it easier to arouse popular support to great causes such as the French Revolution. 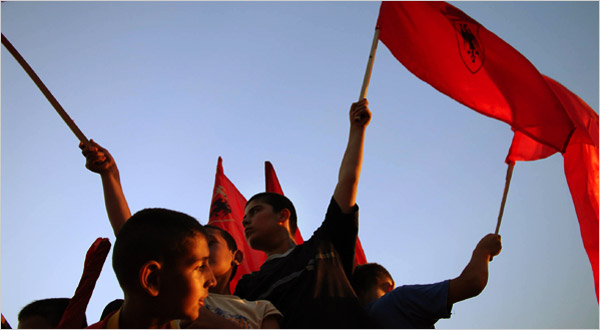 But not until the after the conflagration of World War I were Europe’s intra-lingual dynasties destroyed. By 1922 the Hapsburgs, Hohenzollerns, Romanovs and Ottomans were gone. The League of Nations showed the way forward but still displayed old biases with non-European nations excluded. By 1945, according to Anderson, the “nation-state tide reached full flood”. In 1975 Portugal, the last of the European empires, shed its colonies. The new African states took on the borders of their old European administrations, and in most cases, their languages. Maps and censuses added to the institutionalisation of these new nation-states.

Of course, this inheritance from colonialism left anomalies all over the world. Passionate nationalism exists in such “nations” as the Karen, Palestine, West Papua, Kurdistan, Biafra, Somaliland, and many others, but there is no nation-state. They have all developed nationalist movements. Many people have made the ultimate sacrifice for their “nation” with colossal numbers prepared to lay down their lives for this “ideal”. As Anderson says, dying for one’s country assumes a moral grandeur which cannot be matched by say, dying for the Labour Party, or the American Medical Association or Amnesty International. All these are organisations a person can join or leave, but a person is deemed to have no choice over their country. But this may change again. After all, contemporary nationalism is the heir to two centuries of historic change. History has not yet ended. Who know how nationalism will evolve in the new imagined spaces of the digital age?
Posted by Derek Barry at 10:07 pm

Interesting concept but what about the reality of colonial repression and suffering which many national movements are the response to?

I agree that colonial repression and suffering were (and remain) all too real for subjugated peoples in Asia and Africa. Nationalism here was a tool for gaining widespread support to overcome the power of colonial regimes.

Nonetheless once African countries became independent in the 1950s and 60s they all strictly adhered to the old colonial boundaries regardless of how much sense those boundaries made in terms of cultural, linguistic and social ties.