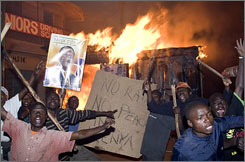 The Kenyan government has ordered a broadcast media blackout in the wake of the riots that greeted the disputed election win of President Mwai Kibaki. The security ministry ordered the blackout “in the interest of public safety and tranquillity”. Journalists were also warned to stop broadcasting “inciting or alarming material” as supporters of defeated candidate Raila Odinga took to the streets in protest at the result. Plumes of smoke rose over the Kibari area of Nairobi, a stronghold of Odinga support for the opposition, where pitched battles occurred between rioters and police on Saturday.

Kibaki was controversially re-elected in Kenya’s fourth election since pluralism was introduced in 1992. Kibaki was sworn in less than an hour after the electoral commission declared he had defeated Odinga by a quarter of a million votes. The official commission result was that Kibaki won with 4,584,721 votes against Odinga's 4,352,993 votes. Odinga had led Kibaki in pre-election opinion polls and in early poll tallies released to the media. Odinga walked out of the press conference during which the results were announced, and claimed that Kibaki was stealing victory.

In his acceptance speech yesterday Kibaki said he was “humbled and grateful” to be offered a second five-year term of office. He acknowledged the closeness of the contest and said now should be a time for “healing and reconciliation among all Kenyans”. He pledged to serve for everyone and called for tolerance, peace and harmony. “I will shortly form a clean hands Government that represents the face of Kenya,” he said. “The new PNU Government will incorporate the affiliate parties as well as other friendly parties”.

However not everyone agrees with Kibaki that the elections were free and fair. British foreign minister David Miliband said he had real concerns about reported irregularities and promised to discuss the matter with international partners. He quoted EU observers who said they had not succeeded in establishing the credibility of the tallying process to the satisfaction of all parties and candidates. Miliband stopped short of declaring the result invalid. “Britain looked forward to working with a legitimately elected government of Kenya,” he said. But, he added ambiguously, “its outcome had to be seen by Kenyans to be fair.”

Despite 30,000 monitors on the ground, chief EU observer Alexander Graf Lambsdorff expressed regret that they had not able to address “irregularities”. Lambsdorff said presidential tallies announced in polling stations on the election were inflated by the time they were released by the electoral commission in Nairobi. “'Because of this and other observed irregularities, some doubt remains as to the accuracy of the result of the presidential election as announced today,” he said.

The 76 year old Kibaki has been in power since 2002 and is only Kenya’s third president since in the 43 years since independence. Jomo Kenyatta led the nation out of colonialism in 1964 and he ruled until his death in 1978. His vice-president Daniel arap Moi took the reins for the next 24 years. Initially popular, Moi won two elections in 1992 and 1997 but he was eventually viewed as a despot. Towards the end of his reign, allegations of electoral fraud and corruption took their toll. Moi was implicated in the Goldenberg scandal which saw Kenya lose $600 million in “fictitious” mineral exports in the 1990s.

Moi was forced to step down in 2002 as the constitution barred him from contesting a third election. In the election, Moi supported Jomo Kenyatta’s son Uhuru but he was defeated 2:1 by Kibaki. EU and UN observers declared the election free and fair. Like Moi, Mwai Kibaki had also served as vice president but he fell out of favour with Moi in 1988 and unsuccessfully contested the 1990s elections against him. He formed a rainbow alliance of opposition parties to combat the entrenched power of the Kenyan African National Union (KANU) party founded by Kenyatta and Moi.

Moi’s legacy to Kibaki was a nation racked by corruption. According to Human Rights Watch, Kenya’s system of governance is based on highly centralised and personalised executive power. The average Kenyan was poorer in 2002 than two decades earlier. Kibaki claimed his goal was reconciliation and rebuilding of the economy. The Kenyan economy grew strongly during his five year tenure. However his 2005 attempt to redraw the constitution to give stronger powers to the presidency was rejected by a plebiscite. 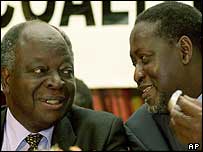 His opponent, the 62 year old Raila Odinga (pictured right) was a former cabinet colleague of Kibaki (pictured left). During the campaign he argued that few Kenyans have reaped the benefits of the country's economic successes. After unilaterally declaring he was the winner on Saturday, Odinga now claims he was robbed of victory. Police have warned Odinga that he faces arrest if he goes ahead with a protest tomorrow against the result. Odinga's Orange Democratic Movement planned to meet in Nairobi to present “the People's President” to the nation. The Police Commissioner has declared the meeting illegal “in view of the prevailing security situation” and cautioned that anyone who attends “will face the full force of the law.” It appears unlikely Odinga’s angry supporters will heed the warning.
Posted by Derek Barry at 4:38 pm

It will be interesting to trace the transformation of Kibaki, a sworn democrat' from 1997 to 2007. The caprice of a few politicians will bring down this beautiful country to a godforsaken one.