Author Helen Garner has applied for the police summary in a Geelong case involving a prosecution witness in the trial of triple murderer Robert Farquharson. Garner told the Magistrate she hoped to write a book on the Farquharson case. The book will be the latest in a string of acclaimed non-fiction books about aspects of Australian culture especially involving sex and the legal system.

By far the most famous of Garner’s non-fiction output was her controversial 1995 book, The First Stone. Taking its title from the Gospel of John 8:7, this was an intensely personal account of a sexual harassment scandal at Melbourne University's prestigious Ormond College in 1992. The case was brought by two female students against a college master, who Garner called Colin Shepherd (in real life Alan Gregory). The students claimed Shepherd had made sexual advances in during a party at the college. After a much publicised court case and appeal, the charges against Shepherd were dismissed. However anonymous leaflets spread around the university insinuating he was capable of further crimes. In the end, Shepherd lost his job as Master of Ormond College.

Garner was fascinated by the facts of the case and wanted to learn more. Garner thought of herself as a feminist but she said “it shocked me now…I felt so much sympathy for the man in the case and so little for the women”. She harkened to her own experience when in 1972 she was sacked from her teaching job for discussing sexual matters with her students. Garner said she was less interested in the guilt or innocence of Shepherd than in the reasons why the women went to the police. She wondered why instead the women didn’t fight back with their own weapons of “youth and quick wits”.

Garner interviewed Shepherd at length and attempted to track down the two female students to get their side of the story. She met the director of the University’s counselling service, a lady known only as Janet F. (none of the parties to the case are identified by name except for Shepherd). Janet met all the players in the case and was impressed by the integrity of the two students. But her report on the case for the university was criticised by the students’ supporters as being too sympathetic to the master. According to Janet, the young women who teach in universities are angry at the notion that someone would “invade” another person sexually. It was a matter of exerting power. And they see sexual harassment as a crime, it was important to punish the perpetrators.

Garner met Shepherd shortly after he lost his job. Prior to working at Melbourne University, he worked at the less conservative Monash. Shepherd said he brought Monash attitudes to the Ormond College job and ‘addressed feminist concerns’ by appointing several females in key positions and instituted an equal opportunity policy. Shepherd believed there was a conspiracy against him and that when he lost the initial case, some of the girls’ supporters at the college held a party to celebrate. Shepherd admitted he had been drinking at the party and danced with the two women. But there was no sexual contact. He blamed the subsequent media attention for destroying his career. 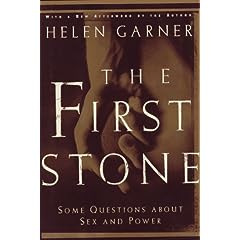 Much of the rest of The First Stone (pdf) documents Garner’s failed attempt to contact the complainants. One of the teachers she met said she was disappointed by the “position” Garner was taking. A “cordon sanitaire” had descended between Garner and the women. Garner became frustrated by what she called those “who expected automatic allegiance from women to a cause they were not prepared even to argue”. Another emissary, known only as Fiona P, said she tried to keep the matter out of the courts but failed because the college structure was “basically males”.

Another of the women’s supporters blamed the lack of clarity in the court result for the problem. She said there were people on both sides “with barrows to push”. The women’s officer of the Student Union said the structures protected Shepherd and the college. She said the procedures gave the complainants an apology and a cessation of the behaviour. But she said the system lacked “retribution”. One graduate told Garner that sexual harassment was “always going to happen” but it has to become “more acceptable for women to get angry” about it. What women needed, she said, was some protection against being made to feel uncomfortable.

Garner believed the university feminists had conflated the matter from harassment to violence. They were trying to make a very broad range of male behaviour into a criminal matter. She worried about the impact on such activities as flirting and said that feminism was “meant to free us, not take the joy out of everything. At the end of her book, Garner lamented that if only the women had “developed a bold verbal style to match their sense of dress” then none of the consequences would have happened. In her view they were afraid of life.

Critics called the book an ‘attack on feminism.’ Garner was widely vilified and her description of one form of modern feminism as “priggish, disingenuous, unforgiving” did not win her many friends. According to Green Left Weekly, the book is “is much less about a sexual harassment case than it is an argument against feminism. It caricatures feminism and then shoots it down in flames. Garner has sought retribution on the wrong subject.” The writer has a point. But she forgets that Garner has legitimised the grievances of women but sets them in the context of what Daphne Patai calls “the unpredictability of Eros”. The book remains an honest, personal and useful examination of the complexity of the relationship between sex and power.
Posted by Derek Barry at 8:20 pm

Interesting book - but I'm still figuring. As far as I can see, the most interesting questions are these. A.Who decided that a failed court case was a good enough reason to dismiss a Master and why? B. What do the offended parties now think about the appropriateness of that decision?
I would be *very* interested to know in what way the writer in Green Left Weekly thinks the book caricatures Feminism. As I see it, the book doesn't offer to be an account of feminism, and so cannot be taken as a caricature.

I'm Ivan Sayer; ivan_sayer_9@hotmail.com. 'The First Stone' is interesting rather than good. It is a bloodless rehearsal for the more important book 'Joe Cinque's Consolation' and the storyline is the same:'Mr. Nice Guy gets Derailed by Ms NastyGirl'. Only, in the case of Joe Cinque there is PROOF.
After all the evidence submitted by Garner there are still four possibilities.
I) No villains. i.e. the master behaved inappropriately but due to a combination of slow reactions, bad law and/or conservative attitudes he was overpenalized.
II) The girls are villains - he was the victim of a scurrilous feminist plot.
III) The college council were the villains - they were looking for an excuse to sack a good man.
IV) A combination of the last two, with or without cooperation.
Ms Garner appears to lean towards II), but 'lean towards' is about it

I don't think that 'The First Stone' was a rehearsal for anything. It may have started as an investigation into the case, but I don't believe that Garner was necessarily looking for any 'plot' or anyone to 'blame'. I think she just wanted to find out why these girls felt the need to go to the police. She seemed bewildered by these extreme actions, and yet, I felt that she had some sympathy for them. At the end of the day I think the case that was brought to the courts was less about the facts, and more about a deep desire to be HEARD. It is just quite heart-breaking that being heard meant that no-one got any real justice. I too would be interested in finding out how the girls feel now. Do they still feel they would do everything in the same way? Or do they wish that they had handled the case differently? They are presumably in their thirties now. They have lost the naivity that goes with youth. Do they feel that the outcome was justified? Or was it extreme? I felt a deep sadness reading the book. I felt that Garner was very clear about trying to always explore deeper than her immediate world view in order to reach the deeper issues. It is seldom that a book that becomes so personal, to the point where it is almost self-indulgent, is so easy to read. I agree with the first quote that this wasn't a caricature on Feminism. Feminist issues were simply important in explaining the context of the book, and in addressing Garner's bewilderment at the events.