Thaksin supporters take their melodrama to the streets 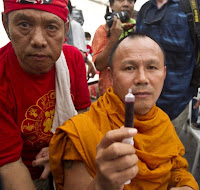 Thailand political protesters have decided to spill blood to match their colour-coded red shirts on the streets of Bangkok. Organisers have asked 100,000 marchers to donate blood which will be spilled at the gates of Government House to demonstrate their fierce opposition to the rule of Prime Minister Abhisit Vejjajiva. Apart from the melodramatic nature of the protest, it is a terrible waste of good blood but it shows the determination of those loyal to ousted Prime Minister Thaksin Shinawatra who have been protesting more or less non stop in the 15 months since Abhisit took power. (photo:AP)

Demonstrators lined up to have their blood drawn by nurses, after their leaders vowed to collect "one million cubic centimetres" of blood. Protest leader Nattawut Saikur said if he still wants to continue as prime minister “regardless of our demands, he must walk across Red Shirt people's blood." Another leader Veera Musikapong said the blood was a sacrificial offering “to show our love for the nation, to show our sincerity.” The protesters planned to spill the blood if Abhisit continues to refuse their demands that he resign.

This latest macabre mass protest has entered a third day bringing 50,000 troops and police to Bangkok’s streets. The red shirts are the United Front for Democracy against Dictatorship. They are mostly rural and support Thaksin, who now lives in exile in Dubai after he jumped bail on a graft charge. He swept to power in 2001 with their support promising measures to benefit the poor, and most still see him as a hero. Micro-credit and affordable healthcare schemes were two popular policies. They believe the Abhisit Government is illegitimate, because it came to power by virtue of defections rather than by winning an election.

The Oxford educated 45-year-old Abhisit first rose to prominence when he became leader of the Democrat Party in 2005 after its crushing election defeat by Thaksin. After a constitutional crisis Thaksin called a snap election in April 2006 Abhisit boycotted it as did all the other opposition leaders. In the chaos that followed there was supposed to be a second election in September but the military coup put paid to that. Though Abhisit disapproved, he gave support to the interim leader and bided his time. He was defeated again in the election that followed in December 2007 by Samak Sundaravej of the People's Power Party who formed a tenuous six-party coalition.

When Samak was sacked for corruption Abhisit lost out again to Somchai Wongsawat, Thaksin’s brother-in-law. But Somchai didn’t last long either. The Constitutional Court banned him and his party for electoral fraud. Many disillusioned MPs defected to the Democrats and Abhisit finally had the numbers. He was elected PM in December 2008. It wasn’t long before the sniff of scandal began to whiff around Abhisit. The opposition accused him of approving false account reports to the electoral commission and filing false information. Abhisit survived a vote of no confidence though the endemic corruption within the Thai body politic continues to dog him. However, the biggest shadow over his leadership remains Thaksin. In March 2009 Thaksin accused the Privy Council of masterminded the 2006 coup that ousted him and then conspiring to make Abhisit leader.

This was the signal for thousands of Thaksin red-shirted supporters to come in from his countryside supporter base to take to the streets. Last year Abhisit declared a state of emergency and he got the army to clear the streets of protesters. This time the catalyst is the constitution court's verdict on 26 February to seize nearly two thirds of Thaksin’s assets. As The Guardian says “For Thaksin, the struggle is now all personal after his assets confiscation. For the reds, the fight is increasingly an organic people's movement to upend the established order. Such all-or-nothing stakes bode ill for Thailand's stable future".
Posted by Derek Barry at 8:53 am