Moscow bombings: Putin and Medvedev have only themselves to blame 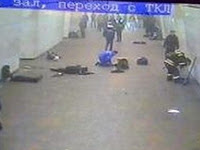 Russian authorities have blamed North Caucasus separatists for yesterday’s Moscow underground attacks without releasing a shred of evidence in support or any claims of responsibility. The death toll in the Lubyanka and Park Kultury metro station bombings rose to 39 today after a young woman died in hospital. 71 others remain in hospital, five critically injured. Russian Intelligence services say the bombs were planted by two women wearing belts packed with the explosive hexogen and metal shrapnel. It was FSB boss Alexander Bortnikov who said those responsible had links to the North Caucasus but he offered no supporting evidence of his charge.

Meanwhile Russia’s tweedle-dum and tweedle-dee leaders Dmitry Medvedev and Vladimir Putin tried to outdo each other in fatuous condemnation without either making any effort to apply wisdom to the situation. Medvedev said “they were simply beasts” without really saying who these beasts were. But whoever “they” were, Medvedev went on to make the ludicrous claim “I don’t have the slightest doubt: we will find and wipe out all of them.” Putin was no better, apparently blaming the attack on dogs or horses when he said those responsible for the attacks would be “destroyed”.

The fact is the Russian government is sowing what it reaped with these and other so-called terrorist bombings in recent years. After the Russian annihilation of Chechen separatists in the 1990s, the opposition has turned to a more extremist Muslim leadership with Saudi Wahhabist leanings despite the fact that most people in the area have peaceable Sufi leanings. The extremists want to declare a Caucasus Emirate and have killed 5,000 people since 2002 in their jihad against Moscow.

The Guardian said the two latest targets appeared to have been carefully chosen to represent a symbolic attack on Russia’s government. The first bomb went off opposite the headquarters of Russia’s FSB anti-terrorism intelligence agency at Lubyanka in the city centre. They say the second bomb may have been intended for Oktyabrskaya station, next to Russia’s interior ministry in the city’s south west.

However it is not beyond the realm of possibilities these may have been false flag operations. The FSB has form in this department. In the Russian apartment bombings of 1999 which led directly to the Second Chechen War, the failed attack on the building in the city of Ryazan was carried out by FSB operatives who were arrested by police. A hugely embarrassed then FSB director Nikolai Patrushev laughed off the incident as a “training exercise”. Those in Grozny did not see the funny side of it as 50,000 civilians were killed in the massive military assault.

Chechnya has had peace of a sort since then but it is a Russian imposed peace and a low-level insurgency continues. And as the Guardian’s Tom Parfitt said last year, Chechnya’s peace is based on murder. Its Kremlin backed government is run by a 33-year-old thug named Ramzan Kadyrov who was appointed by Vladimir Putin. Kadyrov brooks no dissent in his fiefdom, and his soldiers have repeatedly been accused of torture, kidnappings and extra-judicial killings. He has killed off his political and media opponents while Moscow has turned a blind eye. As Parfitt notes Russia has signed “a Faustian pact with [Kadyrov] to quell insurrection and stop terrorist attacks reaching the Russian heartland, in exchange for wide autonomy on his home turf.”

But that is proving an elusive goal. Chechens are still succeeding in bringing the war to Russia’s own turf. The two suspected suicide bombers are part of what the media loves to dub “black widows”. These were women who lost husbands or brothers to the Russian war and who made a spectacular leap into public consciousness during the Moscow theatre siege “dressed in black chadors, their waists and chests adorned with bombs”.

But while the bombs might be hidden behind chadors, the war of ideas is hidden by the bombastic rhetoric of Putin and Medvedev. Their naked greed and imperialism is taking Russian into a dangerous and almost fascistic phase. They have plundered the country’s wealth, killed with impugnity and destroyed the hopes of democracy inherited from the work of Mikhail Gorbachev. They are the real murderers, the “beasts” which should be “destroyed”.
Posted by Derek Barry at 11:01 pm

Hey, in the end of the text, it seems that you confused the reality with the Perestrojka-based Scorpions's song. Gorbachev didn't save Russia, he was one of the politicians who contributed to the destruction of Eurasia: wars in Abkhazia, Ossetia, Georgia, Tadjikistan, Moldova, Daghestan and Chechenia were born again during his political leadership.

But that's normal, all people from USA, UK, Canada and Australia have the same opinions about it: Putin is a fascist, Russians want to kill the poor Chechens...western counries want peace, that's why Soros, Biden and Berezovski are so interested in it.

fair point, although I'm not Anglo-Saxon.

But I'd take your opinion a lot more seriously if you were prepared to put a name to it.