At 5.45am on Wednesday morning I was jolted into life by my alarm. 15 minutes later I was on the road and driving to the council building. The rain had stopped. I did a quick detour to the Arthur St bridge which was flooded out yesterday. There was still plenty of water on the road but it looked passable today. I went into the council’s 6am emergency response meeting at the invite of the mayor. The price of entry was that it would be off the record but there were many things said there they wanted me to get out to a wider audience. (See Day 1 story here) 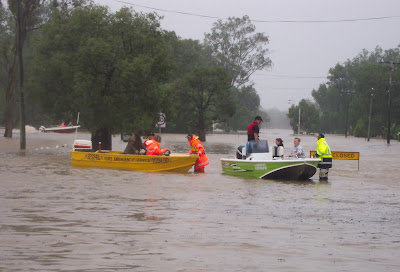 Roma had been declared an official state emergency site yesterday. The Bungil peaked at 8.1m at 1.30pm yesterday but had dropped a couple of metres overnight. They said a quarter of the town had been flooded and at least 200 properties had water damage inside the home. There were no fatalities or serious injuries though there was one report of snakebite. 34 evacuees came through the RSL. There was also talk of the Premier Anna Bligh visiting town later today on her way back to Brisbane from Charleville which was in even deeper strife. It was not yet certain when or if she would come at all given that the airport had been closed for almost 24 hours. I said I would chase up more info via her media liaison unit. The school principal also asked me to contact the ABC. ABC Local news was telling the world one of the three state school campuses was shut. It wasn’t and the principal asked me could I help get the right message out. After an hour of hearing reports from all the emergency services and a mixed weather forecast everyone left knowing the worst was over for now but it wouldn’t take much to rise again.
I went back to the office to catch up on emails and the Internet and take stock. Yesterday I was unable to get to the worst-affected areas – including where I lived as recently as ten days ago. First I went back to the RSL where the McGilvrays had moved home but the oldfellas from St Vinnies hospice were back. I brought a few copies of the paper for them to read and then set about finding more stuff to write about. I was able to drive over the Arthur St bridge in my two-wheel drive with care. The water was still over the road but low enough to get through. 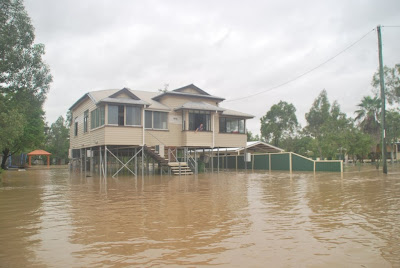 I parked up the road and trudged barefoot through the waters I couldn’t get through yesterday. This area was copping it for the second time in a month. The waters were still waist-high having dropped a metre or two overnight. My RSL friend Jill said I could check out her house so I went inside to take photos. The water had mostly dried out inside the home but had left a smelly mess. I walked around the corner to Charles St and found the house where I used to live.
There was no one there but the water was still all around the back yard and there was a sandbag at the door. Across the road a man named Paul lived in a high-set house on stilts. Paul was there on the balcony and I shouted up to him.

“I assume you were dry enough up there?” I said.
“Yes, the water got as far as the fifth step,” pointing about half way down the stilts.
I asked him about the house across the road where I used to live.
“Yeah the water came right up. Think it got into the house,” he said.
I shuddered with my luck in so recently leaving – my new place was in an unaffected part of town.
I then tried to walk on but the waters were rushing towards the creek here so it was too dangerous and too deep to continue. I went back the way I came and bumped into Johnny Mac. 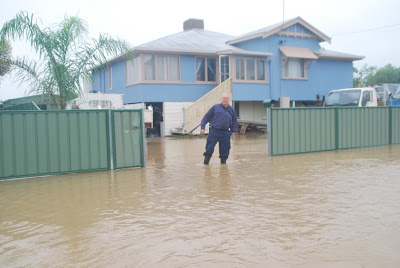 Johnny is a Roma institution and has DJed here for 30 years. Johnny lives on a shed at the back of his brother’s house and the waters got into his place. Worse still they got into the bigger shed where he keeps all his audio gear and destroyed $16,000 worth of amps and other equipment.
“Luckily most of the old records were up high and survived,” Johnny said.
“It’s a musical history of Roma.”
Johnny said he spent the night at his parents who live at the back of the property on a slight hill. But the creek running behind them it was touch-and-go whether they would be spared. He also showed me the swimming pool which was a mess of brown water and collapse shade.
Johnny’s brother Phil Macfarlane then came downstairs and showed me underneath the house. They were getting ready for a garage sale and had all their gear ready for it. But a drum had gotten loose in the water and smashed into all the other contents sending everything flying. 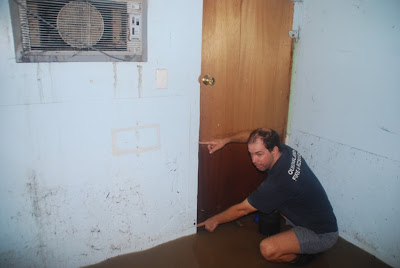 Phil showed me the mark they had drawn for the height of the 1997 flood and this one was at least a metre higher. He and his family were safe enough upstairs in their stilted house but the power was off all night and they like everyone else hoped it would get no higher.
Johnny meanwhile looked disconsolate at all his damage.
“This is it for me,” he said.
“I’ve lived through six or seven floods in my time in Roma and I’ve had enough. It's time to move.”
It was time for me to move on too. Much of the morning had gone and I needed to get back and start writing up my stories for Friday’s paper. I slowly waded my way back to the dry area. On the drive back the water was receding further on the bridge. In the office I heard Anna Bligh wasn’t coming today. Her pilot had deemed the airport too unsafe to land though it had re-opened this morning. I went along to second recovery coordination meeting of the day at 2pm. This time the council chamber was packed solid. As well as all the emergency services, there were reps from Telstra, Ergon, the insurers, health services and both the state and federal member of parliament. 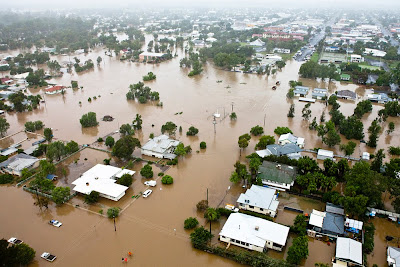 (Image courtesy: Maranoa Regional Council)
The Council CEO officially declared it Roma’s worst flood since records began in 1917 though there was anecdotal evidence of a bigger one in the 1890s.
The sheer size of the meeting meant it was unwieldy and took longer than it should. It was suggested they go back to the core group for tomorrow’s meeting, a fact that didn’t bother me as I was on deadline tomorrow anyway.
I went back to spend a long afternoon collating information and writing up the stories for what we hoped would be a memorable edition of the paper.
At the end of the day, I called in on the RSL again. They had a couple of the St Vinnies oldies staying the night and another couple that had to be helicoptered to safety from their property near Morven about 190km further west. Roy and Jill would stay the night with them again.
Posted by Derek Barry at 10:08 pm