Muntadhar al-Zaidi: a farewell kiss from the Iraqi people 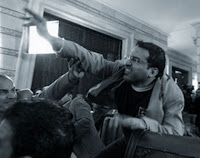 You are an Iraqi press corp reporter. You are in a privileged position; among the elite of your society. You are at a press conference at the Prime Minister's Palace in Baghdad. Nouri Al-Maliki, the Prime Minister of your nation and George W. Bush, the president of the United States are holding a joint conference. The US President is speaking. The professional ethics of your craft and common courtesy would demand that you sit quietly, listen and be respectful. If you hear things you do not agree with, ask a question. The president may, or may not answer. Nevertheless, you must at all times be civil.

But last December, Muntadhar al-Zaidi didn’t want to play by the rules anymore. When he got face time in front of his country's occupier for five years, he didn’t want to ask a question, he wanted to make a statement. “I saw only Bush and it was like something black in my eyes,” he told the court in February.

And today he got a sentence of three years for shoeing a head of state.

Though I can’t be sure, I haven’t seen anyone ask him if he was fond of those Size Tens. We also don’t know for certain if it was it a spontaneous act or careful planning. But what is clear is that al-Zaidi certainly wasn’t fond of President Bush.

The video of the incident is always good for a laugh:


Bush shows good reflexes as the first shoe sails over his head. Al-Zaidi then uses the stunned silence to throw another shoe and shout out "this is a farewell kiss from the Iraqi people, you dog!" The head of that people, Al-Maliki, makes a half-hearted attempt to catch the second gift. Al-Zaidi is wrestled to the ground by journalists and security and finally the heavy brass enters the room just after the nick of time. No-one is hurt in the entire episode except perhaps al-Zaidi himself. The whole plot is translated by the media as “Breaking News: President forced to duck.”

The video was hugely popular. It was soundbyte perfect and made for great news footage that played endlessly across the globe. Within the Arab world, al-Zaidi became both instant hero and cult figure. He hit the jackpot by using the cultural act of shoe-throwing to send a powerful message of disrespect. Even the shoe company did well out of Al-Zaidi. The reaction of Jordanian businessman Samer Tabalat was typical: "Al Zaidi is the man. He did what Arab leaders failed to do."

Tabalat meant Arab leaders had failed to stand up to the US, not failed to throw shoes at its leader. But now Muntadhar al-Zaidi has made a meme extraordinarily popular and the tactic du jour of protesters everywhere. Throwing footwear is an excellent low-harm way of expressing political displeasure. Figures as diverse as the Mayor of Ithaca NY, the Israeli ambassador to Sweden, Chinese Premier Wen Jiabao and Bush again have all copped brogues from copycat offenders. Somewhat ironically, Brazilian president Luiz da Silva went on the front foot when he threatened to throw his shoes at unfriendly journalists.

But the Committee to Protect Journalists (CPJ) noted hypocrisy. They say that many government officials in the Middle East have come out in support of al-Zaidi while their own countries have a long and thoroughly documented history of repressing journalists. The CPJ also says the case is not about press freedoms but legal freedoms. “Al-Zaidi was not acting as a journalist when he threw his shoes at Bush, [but] he is entitled due process and the full protection of the law.”

Al-Zaidi should have known this. He was a Shia graduate from Baghdad University with a degree in communications. He is a reporter for al-Baghdadia, a Cairo-based satellite network. In 2007, he was kidnapped by gunmen and released unhurt after three days. In January 2008, US troops detained him overnight and searched his flat before releasing him with an apology. His older brother Dargham said both experiences fuelled Muntadhar’s resentment against the US military presence in Iraq. "He hate[d] the American physical occupation as much as he hate[d] the Iranian moral occupation," he said.

Last month, Al-Zaidi pleaded not guilty but his Defence lawyer Yahia Attabi expected today’s decision. He told reporters outside the Baghdad court that under the Iraqi criminal code al-Zaidi was charged with assaulting a foreign leader on an official visit. His lawyers tried to argue that his shoe-throwing did not cause any injury or damage.

Judge Abdulamir Hassan al-Rubaie did not agree and today dished out three years. But given that the maximum sentence for this type of assault is fifteen years, there is reason to believe this is a good outcome. Al-Zaidi will probably be out of prison in twelve months. While it is always foolish to predict, it is difficult not to believe he will profit from his newly acquired cachet.
Posted by Derek Barry at 11:01 pm

this is the least what this savage Al-ziedi deserve, ppl like this need to be exterminated

whoops, I can't say that