Despite a successful half billion dollar share issue yesterday, Fairfax Media remains saddled with a mountainous $2billion debt. The company’s whose flagship publications are the Australian Financial Review, the Sydney Morning Herald and The Age, is hoping to raise more money through an offer to retail shareholders that opens tomorrow, however the proceeds from this offer won’t be known until early April.

The shortfall following a massive half-year loss leaves the company dangerously exposed to a banking takeover and the markets were unimpressed. After coming back off a trading halt Fairfax shares finished the day yesterday at 88c down 5 percent. Shares went down another cent today.

The day began yesterday when Fairfax announced it had sold $500m worth of shares to institutional investors. In a media statement (curiously and pointlessly embargoed in these Internet times as “not for distribution or release in the US") Chairman Ron Walker claimed to be happy with their institutional entitlement offer which was taken up almost entirely by existing shareholders. The revenue will be used to pay off a substantial portion of the companies syndicated loans that mature in 2011 and 2012. “This successful equity raising considerably enhances the financial position of the company in these difficult economic times,” said Walker. Later in the day, Fairfax made another announcement to the ASX about the retail component of the offer. It said it wants to raise another $184 million through an accelerated non-renounceable entitlement offer.

Fairfax had halted trading in its shares last Thursday while it considered raising funds. That announcement came just three days after it announced it did not require a capital injection despite a $365.2 million net loss for the final six months of 2008. Presenting the half year results (ppt), the company’s new CEO Brian McCarthy said Australian and New Zealand publishing markets were the worst affected by the economic conditions. The EBITDA (Earnings Before Interest, Taxes, Depreciation and Amortisation) for the Sydney and Melbourne metro dailies went down by 23 per cent. New Zealand’s performance was even worse, dipping by a whopping 29 per cent during the period.

The newsprint problems are not, of course, isolated to Fairfax. Rupert Murdoch's News Ltd is also facing massive debt issues. And last week the Denver Rocky Mountain News published its final article after 151 years. The publishers, E. W. Scripps Company, announced the day before that the paper had been up for sale but had attracted no credible buyers. They said its losses, which amounted to $16 million last year, could not be sustained.

Nevertheless, the Rocky Mountain News’s 2008 losses are a pittance compared to Fairfax’s half yearly figure. Andrew Landeryou at Vexnews says Fairfax is on the verge of liquidation because it is close to exceeding key profit to interest/debt ratios that would allow banks and bond holders seize control of the company. While Landeryou is admittedly biased (consistently talking about the supposedly “left-wing newspaper" The Age), he may well have the inside scoop on this issue. He quotes an unnamed industry observer, “They’ve borrowed many millions on The Age and (Sydney Morning) Herald’s mastheads, which we doubt they could get anything much for in a firesale.” 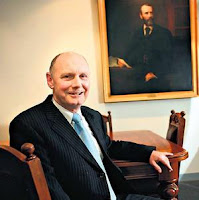 Landeryou’s source makes the well known point that Fairfax dependency on the classified “rivers of gold” is diminishing alarmingly quickly as advertising moves online. In Australia the internet is about a $1.7 billion advertising market compared to television at about $4 billion and the industry as a whole at $12 billion. Fairfax’s classified quandary was featured on last Sunday’s ABC’s Inside Business program. Media analyst Roger Coleman told the program that defence was newspaper groups’ biggest problem and they were vulnerable to new Internet competitors. “Why give up…$100 million operating earnings, to only earn $2 million to $3 million online?” McCarthy will need to address this headache if he plans to keep his job by the time the next six monthly figures emerge.
Posted by Derek Barry at 11:21 pm