An Iraqi court has sentenced the cousin of Saddam Hussein to death yesterday. His name is Ali Hassan al-Majid but he was better known to the world as “Chemical Ali”. The former head of the Baath Party's Northern Bureau Command was sentenced to death with two other former regime officials for their roles in a 1980s scorched-earth campaign that led to the deaths of 180,000 Kurds in Northern Iraq, known as Operation Anfal.

Born in 1941, Al-Majid was a warrant officer and motorcycle messenger in the army before Saddam's Baath party took power in a 1968 coup. The Kurds gave al-Majid the nickname of "Chemical Ali" for using poison gas against them in the Anfal campaign. “Surat al-Anfal” is the eight chapter of the Koran and means spoils of war. It was the culmination of years of effort by Saddam’s regime to suppress the long-running Kurdish rebellion. Launched in early 1988, the campaign lasted about seven months and involved chemical; weapon attacks, the destruction of over 2,000 villages and mass deportations.

Al-Majid served as governor of Kuwait during Iraq's seven-month occupation of the emirate in 1990-1991 and was then linked to the bloody crackdown on Shiites in southern Iraq when they rose against Saddam in 1991 in the aftermath of the first Gulf war. He was promoted to general and served as defence minister from 1991-95, as well as a regional party leader. Al-Majid was governor of Southern Iraq and number 5 on the list of the 55 most-wanted Iraqis at the time of the US-led invasion.

In the immediate aftermath of the invasion, it was mistakenly believed al-Majid was killed. A British officer said his body was found along with that of his bodyguard and the head of Iraqi intelligence services in Basra. British troops entered Basra on 7 April 2003 in the belief that al-Majid’s death would lead to the end of resistance in the city. The British believed Al-Majid was killed two days earlier when coalition aircraft used laser-guided munitions to attack his Basra home.

But by June 2003, Coalition forces were no longer so sure he was dead. The US gathered intelligence from detainees which threw doubt on the earlier British report. His status was changed from ‘confirmed dead’ to ‘unknown’. Two months later, US forces announced his capture but did not divulge details on how it happened. He was held at the same detention centre outside Baghdad as Saddam and 10 other top lieutenants of the Baath regime. 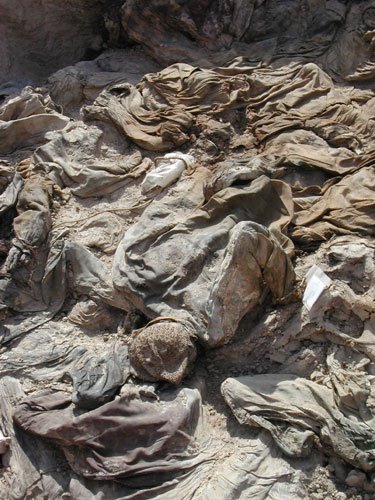 Al-Majid was brought before the Iraq Special Tribunal and charged with genocide in August 2006. He briefly stole the limelight of Saddam’s second trial when which he walked into the court using a cane and wearing a red headscarf and proudly identified himself as "Fighting comrade 1st Maj. Gen. Pilot Ali Hassan al-Majid." He refused to give a plea, and a plea of innocent was entered for him. In sentencing him yesterday, Judge al-Khalifah blew his defence away "You led the killing of Iraqi villagers [and] you restricted them in their areas, burnt their orchards, killed their animals,” he said. “You committed genocide."
Posted by Derek Barry at 10:26 pm