Fatma Riahi on frontline of Tunisia's war on bloggers and journalists 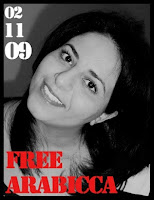 Blogger Fatma Arabicca has resumed blogging two months after authorities arrested her but the blog remains censored. Fatma joins another high profile Tunisian blogger journalist Sofiene Chourabi on the censorship list in recent times. Fatma’s original blog was deleted in November just before she attracted the unwelcome notice of authorities but a new version (in Arabic) has been posting since 17 January.

Arabicca is the nom de blog of college theatre professor, Fatma Riahi. On 2 November, the 34-year-old Riahi was summoned to appear before a Tunis criminal court where she was questioned about her online activities. The authorities wanted to know whether Riahi was hiding behind the pen-name of Blog de Z, a Tunisian cartoonist blogger whose political satire enraged the government. They released her and summoned her again the next day. Three security officers escorted her to her house in Monastir 160 km from Tunis, to confiscate her PC and conduct a search for evidence. A day later, they escorted her again to Monastir to get her passwords and access her facebook account.

Riahi was detained for a week and denied permission to speak to her lawyer for longing than a few minutes. She was charged with criminal libel that potentially carries a prison term to up to three years in prison. A Free Arabicca campaign blog was been launched by fellow Tunisian bloggers in support for Fatma (though it hasn’t posted since mid November), and there is also a Facebook support page.

While it is not clear what Riahi’s perceived offence was, it didn’t need to be much to rile the sensitive Tunisian government. President Zine el-Abidine Ben Ali's government is one of the most repressive in the world as regards Internet usage. Social networking sites such as YouTube and Facebook are often blocked because of content criticising the president's policies and the government also filters emails of human rights activists. The 2008 Reporters Without Borders freedom of the press index ranked Tunisia 143rd out of 173 countries. When the Journaliste Tunisien blog posted the index a day after it was issued, it was blocked by authorities.

Just last week the Committee to Protect Journalists reported an appeals court in Nabeul refused to release Tunisian journalist Zuhair Makhlouf despite his completion of a three-month prison term imposed in October. Makhlouf is a contributor to news Web site Assabil Online and the opposition weekly Al-Mawkif. He was sentenced in October on the charge of “harming and disturbing others through the public communication network.” The sentence ended on January 18 but Tunisian penal code provisions say a prisoner cannot be released before all appeals have been considered. The court designated February 3 as the date for Makhlouf’s initial appeals hearing.

The decision came days before an appeal hearing for Taoufik Ben Brik, a journalist sentenced to six months in prison. Last year Reporters Without Borders (RSF) criticised the detention of Ben Brik and a violent attack on another journalist. In October 2009 Ben Brik was detained on a trumped-up charge of harassing a woman on the street. Reporters Without Borders said the arrest was an effort to muzzle him for his fierce criticism of President Ben Ali. Around the same time, independent journalist Slim Boukhdhir was attacked by a group of men just hours after he gave a critical interview to the BBC. RSF said the behaviour was “befitting of a mafia regime."

The regime is showing no signs of changing its hostile attitude to journalists. Ben Ali has ruled Tunisia since taking over in a bloodless coup in 1987. In 2009 Ben Ali was re-elected for a fifth term with 89 percent of the vote in a rigged election. Although he promised to promote media diversity in 2004, the regime retains a tight control of news and information. According to the RSF, journalists and human rights activists are the target of bureaucratic harassment, police violence and constant surveillance by the intelligence services. The Internet is strictly controlled and foreign journalists are not allowed anywhere without the presence of government officials. But despite a total lack of regard for democratic institutions, RSF says Ben Ali is treated very leniently by international organisation all because he is “an ally of the west in its fight against terrorism.” No one seems to care about the terrorism he inflicts on his own subjects.
Posted by Derek Barry at 10:14 pm