New test to help crack down on illegal ivory trade 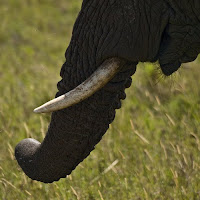 A new test to distinguish antique from modern ivory may help defeat the illegal trade in ivory. The EU allows the sale of antique ivory from before 1947, but once a tusk is carved there is no accurate way of distinguishing it from modern ivory. Until now, the only option has been to send samples to museums where experts tried to work out its age from signs such as how yellow it appeared. However this evidence would not stand up in court. A new method by an Edinburgh Zoo scientist can determine the age of ivory by looking at its level of carbon isotope. Because of nuclear testing which started in the 1950s, modern ivory has double the amount of carbon 14 than those of elephants that lived before the nuclear age. The test will now be rolled out to all European countries. (picture by wwarby)

While Europeans have killed elephants for trade since colonial times, the large-scale exploitation of elephant herds began in the 1970s. Organized gangs of poachers used automatic weapons while corrupt governments turned a blind eye. They laundered tons of elephant tusks through several African countries to destinations in the East and West. At its height, the ivory trade was driving the poaching of an estimated 100,000 African elephants a year for their tusks, as species numbers dropped from 1.3 million to 600,000.

Things improved after the African elephant was listed on Appendix I of the Convention on International Trade in Endangered Species of Wild Fauna and Flora (CITES) in 1989. This banned the ivory trade though it carried on illegally. And only 16 out of 35 African countries complied with the CITES system. The Born Free Foundation says thousands of elephants are still killed every year for their ivory. The British animal welfare group describes the slaughter as “horrifying”, with poachers shooting elephants with automatic weapons and hacking off their tusks with axes and chainsaws.

In November 2009 Tanzania and Zambia submitted a proposal for the relaxation of the ban to allow for the sale of 100 tonnes of stock-piled ivory to China and Japan. The proposal will be examined at an international meeting on wildlife conservation scheduled for March. There is a precedent for this. In 1997 regulations were relaxed for a one-off sale of 60 tonnes of stock-piled ivory. There was a similar sale in 2002. But Kenya has opposed the latest request for a relaxation saying it could lead to increased poaching in the region. It also wants the ban to include rhinos. Kenya’s elephant population dropped from 168,000 in 1969 to only 16,000 in 1989 when the ban was enforced. The population has now risen to 35,000 since the ban but the rhino population has decreased by a third in the same timeframe.

The Chinese market is now driving the demand for ivory. The problem has escalated in recent years as China forges more links with Africa. Chinese entrepreneurs, miners and tourists are coming to the continent in increasing numbers fuelling the illicit trade. Over 35 million tonnes of ivory has been illegally imported into China from Africa in the last 10 years and British-based wildlife trade monitoring network TRAFFIC is working with China to educate travellers about ivory smuggling. But there are concerns the Chinese government is reacting defensively to reports of Chinese people caught in the act. After an Interpol operation seized several tonnes of ivory in November and arrested three Chinese and 62 Africans, China Daily refuted the director of a Kenyan wildlife NGO, who blamed the growing number of Chinese workers in Africa for the rise in elephant poaching in Kenya.

Ominously, ivory trade has been on the rise across the continent since 2004 but increased sharply last year according to TRAFFIC. Their latest report said the surge in 2009 suggest an increased involvement of organized crime syndicates in the trade, connecting African source countries with Asian end markets. According to its analysis of 14,364 ivory seizure records from 85 countries between January 1989 and August 2009, the adjusted trend for illicit ivory trade has risen to over 25 tonnes, the second largest after a peak of 32 tonnes in 1998. CITES will submit the report to the upcoming meeting of member countries.
Posted by Derek Barry at 9:33 pm