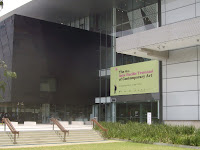 I took in the APT6 at the Gallery of Modern Art on a whistlestop visit to Brisbane this weekend. APT6 is shorthand for the sixth Asia Pacific Triennial of Contemporary Art and having been greatly impressed by the last three triennial incarnations (in my ten years or so living in Brisbane), I was looking forward to seeing the latest version. I was not alone in my excitement. The exhibition has attracted 200,000 visitors in the opening six weeks since it began on 5 December.

This level of patronage is not unprecedented. 1.3 million have visited the six exhibitions but numbers really took off with APT5 in 2006 when it moved into the gleaming new GOMA building on Kurilpa Point. First established in 1993, the APT is the Queensland Art Gallery’s flagship international contemporary art event. It is the only major series of exhibitions in the world to focus exclusively on the contemporary art of Asia, the Pacific and Australia.

The 2009 exhibition shows the work of over 100 artists from 25 countries, including a number of artists and artist collaborations never seen in Australia including works by artists from Tibet, North Korea, Turkey, Iran, Cambodia and Burma. According to Queensland Art Gallery director Tony Ellwood, APT6 looks at a number of thematic links, including “the dynamism of collaboration, the power of popular culture to articulate perspectives on contemporary life, the impact of rapid social change on local communities and cultures, and the practice of drawing”. The exhibition continues until 5 April 2010.

Here are some of my favourites from this year's collection. 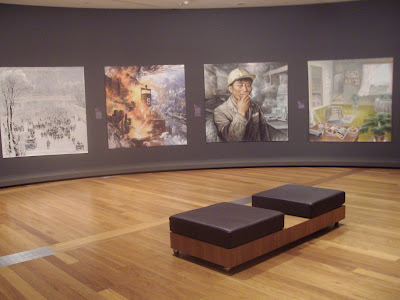 I was expecting the North Korean art to be showy in a Stalinist way and while they do promote Dear Leader's Juche they are surprisingly touching and endearing. The work from the Mansudae art studio display a heart and affection for their subjects I simply wasn't expecting. 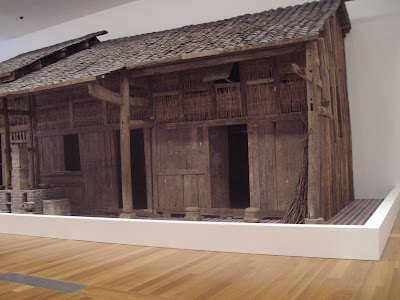 Chen Qiulin's enormous installation is a poignant reminder of what rural life along the Yangtze River was like before Three Gorges Dam hydro-electric project flooded the entire region. If the house is the ghost of Three Gorges past, his video Garden 2007 is a equally fascinating walk through the towns that now exist in the area. 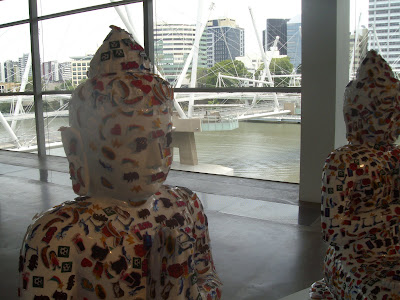 The Funky Buddhas is a work by London-based Tibetan artist Gonkar Gyatso. This work is supposedly for the kids as you get the chance to place colourful stickers all over the buddhas. But although there were no stickers available to put on the Buddhas when I was there, I still enjoyed the humour of the piece and its fantastic location looking out to the new Kurilpa footbridge. 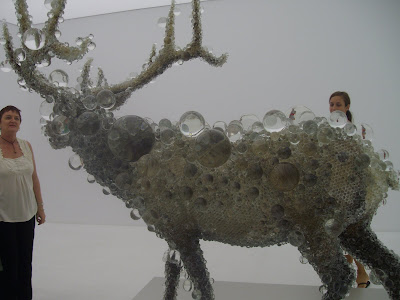 Ah yes, the elk. Impossible to walk past and deservedly gets a room all to itself. The 2.5m taxidermied elk, or to be precise Pixcell Elk#2 is by Japanese sculptor Kohei Nawa. It is covered in glass, acrylic and crystal baubles of varying sizes which magnify and distort the object’s form in different parts to various degrees. 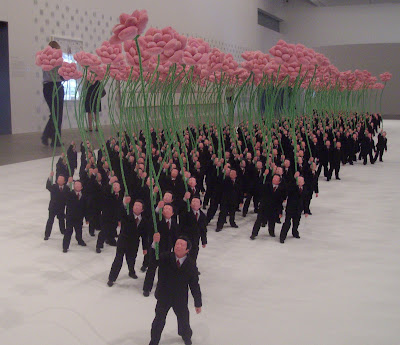 Called "People Holding Flowers" this installation by Zhu Weibing and Ji Wenyu is the signature piece for APT6. The work is made of synthetic polymer paint on resin; velour, steel wire, dacron, lodestone and cotton. There are 400 figures all holding flowers in a deliberate memory of Mao's short-lived 1950s mantra of "let a hundred flowers bloom". An overwhelming response to the Hundred Flowers Campaign led to serious crackdowns on dissent. Arguably nothing much has changed in 50 years in China. 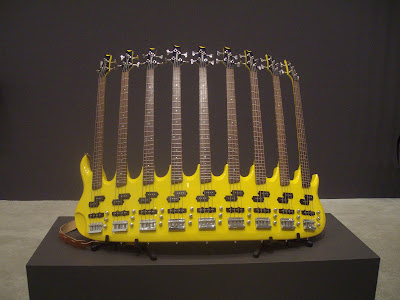 I loved Rudi Mantofani's collection of unplayable guitars. Mantofani is an Indonesian sculptor and painter whose work transforms ordinary objects into strange or absurd "visual parables". Mantofani's guitar sculptures were inspired by a benefit concert he saw in New York. He said, the gap between American philanthropic rhetoric and the harsh effects of its foreign policies in the Muslim world led him to "create a series of distorted guitars, as a means to express such ethical contradictions." I'm not sure I saw those contradictions in the works but I couldn't help loving the guitars.
Posted by Derek Barry at 8:24 pm