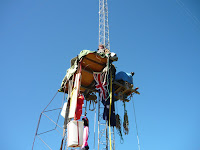 Peter Spencer has entered the 50th day of his hunger strike perched on a wind-monitoring mast on his property near Cooma in NSW. Spencer hasn’t taken any food since 23 November as part of a campaign for a royal commission on land-clearing laws that prevent him from clearing native vegetation on his property. But his campaign is about to be complicated by a sheriff's notice this week ordering him to vacate the property following legal proceedings by family members to sell the property in order to recover an unpaid debt. What happens next is problematic. His position 10m high on the so-called “tower of hope” on the highest part of his property is both symbolic and good media management. But there is also a practical element: it makes it harder for authorities - either police or medical - to forcibly remove him.

The 61-year-old Spencer has survived this long on a diet of water, lemon juice and vitamin tablets. His friends say he is still sound of mind but admit they might be forced to intervene to protect his life. Alastair McRobert, a friend and de facto spokesperson said Spencer’s resolve is as strong as ever and he is in contact with his doctor. "However, when he doesn't know what he's doing, that's when intervention will most likely happen to keep him alive,” McRobert said yesterday. "None of his friends like seeing what Peter is doing to himself but we respect the stand he is making."

Spencer has repeatedly said only one person can respond to that stand. He says he won’t end his hunger strike until Prime Minister Kevin Rudd admits the Australian Government owes farmers like him $100 billion for capturing carbon in their soil. A meeting with Rudd is not sufficient. He is fighting for compensation for not being allowed to clear his property under state-based native vegetation laws which the former Howard Government then used meet Australian Kyoto carbon emission targets.

Spencer is holding Rudd accountable even though it is NSW legislation he is fighting. He said on 7 December “there's no discussion. He [Rudd] can either meet the demands or he can bury me, suit himself.” And in an open letter to Rudd, Spencer declared “you must bear the burden for the theft of the entire Kyoto emission target… from the targeted farmers”.

But the Prime Minister is showing no inclination he is about to be blackmailed by Spencer. A spokesman said the Government sets policy in the national interest and the policy “will not be changed by threats of violence or self harm.” The government says it deals with many people each year who threaten self-harm and is urging Spencer to end his protest and seek medical attention.

Yet it is difficult not to feel some sympathy for Spencer’s plight. He bought his 6,000 hectare property in the 1980s at Shannon’s Flat near the border with the ACT. His time on the property was plagued by bad luck. 60 percent of the property had been cleared in the 1930s. But after Spencer bought it, he was overseas and unable to farm and four-fifths of his property became covered in regrowth. When he returned to Australia, he found he was unable to clear due to new native vegetation laws. Then he set up ponds for trout fishing which failed due to stricter water storage laws. When he tried to set up a fine wool program it was undone by a plague of wild dogs that fled the 2003 Canberra fires and killed hundreds of his sheep. The drought was the last straw but Spencer was unable to claim drought relief because his farm was deemed unviable.

But as the Canberra Times notes, although Spencer looks like lunatic in the climate change circus, he is a resourceful businessman supported by a formidable legal team headed by Sydney barrister and former holder of Malcolm Turnbull’s seat, Peter King. His home resembles a media war room with press releases, newspapers and policies piling up and phones ringing incessantly. Spencer is getting a lot of support in rural areas and has the backing of Agmates and Sydney radio station 2GB.

He also inspired a protest march on Canberra last week with hundreds of farmers calling for a royal commission into property rights and land clearing in Australia. Spencer has made 200 court appearances over the past decade to try and get compensation or else remove the 80 percent unusable land from his rates evaluation. None of the cases went anywhere. “What they kept on doing was just they wouldn't give us a chance to present our evidence, they just moved to strike us out,” he said. The matter remains stalled at the High Court without a hearing awaiting the determination of a related case about water rights.
Posted by Derek Barry at 9:50 pm