Labor has won. The analysts are arguing over the margins and WA is not yet in but the only question is by how much. Howard has not yet conceded, yet he is presiding not just over a defeat, but is also relying on postal votes to avoid the humiliating loss of his own seat. Labor have a guaranteed 82 seats so far needing 76 to form government. They are also leading in most of the undeclared seats. The swing is 5.7 per cent. Neither leader has emerged yet to either concede or claim victory. But there is no doubt that Kevin Rudd has replaced John Howard as Australia’s Prime Minister.

Kevin Rudd’s name is almost astonishingly absent from the commentator’s lips at the moment but this represents a huge victory for the Queenslander who has turned around 2004’s massacre of Mark Latham in resounding fashion. It is also a personal defeat for John Howard who hoped to seal his legacy with a fifth straight election victory.

Not since the Wall St Crash era of 1929, has an Australian prime minister lost his seat. In that election Stanley Melbourne Bruce of the defunct United Australia Party went down with his ship. John Howard is in deep trouble behind on preferences this time round and is relying on a large postal vote to avoid defeat. Maxine McKew is on screen as I write, saying it was “still on a knifeedge”. But she is probably being coy. And even if McKew does not win Bennelong from John Howard tonight, there is little doubt she will win it comfortably in a by-election to follow in the next month.

ABC and Sky News were calling the result around 8.30pm Sydney time. Among the print media, the Daily Telegraph was an early on-line entry around the same time saying "Labour” were claiming the win. While the British daily may not realise the ALP use the US spelling of “Labor” they have correctly called the election.

Little word from the Senate yet but it likely the Coalition’s current majority there will disappear by 1 July 2008 when current terms end (there was a small chance it could end tonight if the second ACT seat falls to the Greens). In the lower house Labor needed a national swing of 4.7 to win and looks to have exceeded that comfortably. Needing 16 seats to change hands to claim government, it has picked up 20 definites so far. They are 7 seats in NSW, 6 in Queensland, 3 in South Australia, 2 in Victoria, and 2 in Tasmania (getting a clean sweep of the apple isle in the process). Several others seats including Howard’s remain in doubt.

But the champagne is already out in the Labor campaign offices and the Labor fans, Chaser boys and TV network wannabees are running amok in the tally room leading a chant of “Julia, Julia”. The queue to get into the room is massive. Inside they are feting the new deputy Prime Minister, Julia Gillard in the ABC tally room studio. Their loud whooping is causing much annoyance to ABC election presenter Kerry O’Brien. But Labor’s exultation is understandable, the party has not won government from opposition since 1983. 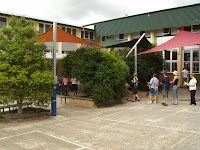 The mood for change was obvious out in the electorate. At the Catholic school where I voted, there was a queue of 30 people outside waiting to vote. The Liberal placards warned of “wall to wall Labor” while Labor’s called for “New Leadership”. I voted in the safe Labor seat of likely Treasurer-to-be Wayne Swan. I met fellow blogger Sam Clifford the sole Greens rep handing out how-to-vote cards. Theirs was a call to “Take action, Take Green action in the Senate”. Sam was zinced up with a full day ahead of him on the hustings. A man in a Kevin07 t-shirt was explaining the voting process to two women.“Swan is in the lower house, that’s where you are voting for the Prime Minister. The guys in the Senate you won’t have even heard of.”

As I entered the school building, there was a poster on the wall. It was a face of Jesus which was broken up into hundreds of people’s faces. Underneath was an injunction from the Gospel of Matthew 25:40 “truly I tell you, just as you did it to one of the least of these…you did it to me”. I’m not sure if this was a coded illegal how-to-vote message inside the election room directed at the minor parties.

Or maybe it was directed at Labor after all. Julia Gillard has just called Maxine McKew “a miracle worker”. The tally is now 81 to Labor. Sometime in the next hour John Howard will concede defeat. Then the man who amazingly no-one on TV still dares name, will emerge to claim victory. And he will say “My name is Kevin, I’m from Queensland and I’m here to help”.
Posted by Derek Barry at 8:39 pm

Nice to meet you on election day, Derek. My fiancée was at home (we live across the road) preparing the lunch packs for the two of us during the day. We stayed right until the end and by the end of the day all the booth workers, including rival candidate from the Hamilton by-election, Anna Herzog, were having a good chat out of the rain.

Great result in the House of Reps, let's hope the Senate count goes well for Larissa.

Pleasure to meet you too, Sam.

A good effort by Larissa, but unfortunately I don't think its going to be enough to get over the line. Hope I'm wrong.