LaRouche and the CEC: life on the lunar fringes 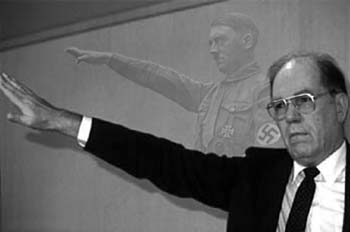 Serial presidential candidate Lyndon LaRouche told a China reunification conference on the weekend that the US and China needed to unite to reform the world’s financial system. Despite LaRouche’s unorthodox views and his tendency to see conspiracies everywhere, he always manages to gain an influential hearing and this conference was no different. He was a keynote speaker at Saturday’s Forum on US-China Relations and China's Peaceful Reunification, a gathering of a hundred US and Chinese government officials, scholars and activists to discuss the Taiwan question.

LaRouche told the conference the international financial system was in crisis and could only be brought under control by US-China co-operation. He proposed the US should form a sponsoring group made up of the governments of the China, Russia and India in order to “stabilise the world system”. LaRouche’s thesis was that the central bank needed to be placed under the government’s power, massive infrastructure projects were required, and a new Bretton Woods agreement was needed to fix the world’s exchange systems.

These are central themes for the now 85 year old Lyndon LaRouche. LaRouche has covered the entire political spectrum in his time. He began his political career on the Marxist left before gravitating to the Democrats. Though never endorsed by the party, he has run in the last four presidential elections (including one he ran from prison). In the 1980s, he was given unfettered access to the NSC and CIA for reasons never divulged but he claimed were related to President Reagan's Strategic Defence Initiative (SDI).

However he is best known for being sentenced to 15 years in jail for fraud related to fundraising for his movement and for his bizarre projects and conspiracy theories. He proposed a Eurasian land bridge to the Americas as “an economic engine of world development”. He also claimed Queen Elizabeth and Prince Phillip head a "financial oligarchy" that rules the world, that the British monarch is also responsible for most of the world’s drug trafficking, that Zionism is part of this conspiracy and that the Ku Klux Klan is controlled by the FBI.

LaRouche’s Australian wing is the shadowy and lunar right Citizen’s Electoral Council (CEC). The CEC was formed in 1988 in Kingaroy, Queensland, in response to the rural crisis when many farmers were in danger of losing their farms. Initially a successful grass-roots political organization with about 100 rural branches around the country, it was taken over within a few years by LaRouche’s supporters. Former members were worried those who stayed would be put through a LaRouchian "Cadre School" in the US, which was described as a brainwashing session to bind followers to the organisation.

LaRouche’s noted misogyny is rife in the CEC. Motherhood and the influence of women over their children were both often derided. Women were frequently referred to as "witches." LaRouche has written about "Mothers' Fears" the many psychological problems of activists allegedly caused by their mothers. One former member said she left an American LaRouche group in disgust when told that women's feelings of degradation were because female sexual organs are near the anus, thus causing women to confuse sex with excretion.

LaRouche has become a successful prophet of doom. According to the CEC, the most pressing issue of our times for Australia and the world is the “accelerating onset of a new Great Depression”. They place the blame on the “anti-human, bestial policies represented by the rock-drug-sex counterculture which took off in the 1960s”. Their solution is the LaRouchian policies (enunciated in his China conference speech) of a national bank, state infrastructure and a “new Bretton Woods”.

Despite the delusionary nature of LaRouche’s views and his apparent anti-Semitism, his Australian party is very active and an extremely able fundraiser. The CEC have been prominent at Government’s public consultations, with members loudly voicing their opposition to the proposals and distributing pamphlets. Annual returns on the Australian Electoral Commission website show that for 2002/2003, the CEC and its associated entities raised in excess of $1,786,000, a figure bettered only by the Coalition and the ALP.

The impressive CEC fundraising ability has not translated into electoral success. In the federal election just gone, they performed abysmally in the lower house seats they ran in and did no better in the Senate. In NSW and Victoria they took 0.05 per cent of the vote, Queensland and WA slightly better at 0.08 and they took 0.09 per cent of the Tasmanian. People in South Australia were the most sensible with just 207 people preferencing the CEC – barely 0.03 per cent of the total vote. Thanks to the unimpressed citizens of Adelaide and elsewhere, it will be at least until 2010 before the US and Australia are exhorted again to “defeat the evil British empire”.
Posted by Derek Barry at 8:02 pm

Like most bloggers attacking LaRouche, your total lack of sense of humor is apparent. Does this mean that the Chinese leadership wants to bash the British Queen? Or perhaps they know something of the bankrupt British free trade and globalized system. And then there's the good old opium war...

thank you for taking the time to visit and leave your comments.

Are you suggesting that if I did have a sense of humour, I'd agree with Larouche?

Hmmm. Having studied his eccentric Britbashing (perhaps a 100 years too late), you may have a point there!

The rapier wit of you Larouchians is killing me!