Election 2007: healing of a bipolar nation? 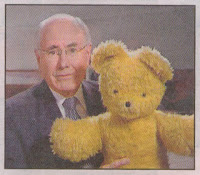 With just two days left of a bloated six week election campaign, Australia is are witnessing the final messy moments of the John Howard era. The $60 million advertising campaign ends tonight with the compulsory 48 hour blackout before Saturday’s ballot. The Prime Minister remains bewildered to the last why the nation is deserting him during a resources boom and a 33 year low in unemployment.

Appearing on ABC’s 7.30 Report last night, he clung to his two main themes of economic prosperity and national security credentials as reasons why voters should continue to trust him to run the country. He said the country was flirting with “change for change’s sake” and warned the country would be different. Not for the first time he launched into a scare campaign about the consequences of victory for Labor by comparing a change of government to an unwanted pet. “It's not like a Christmas present you didn't want,” he said. “You can take it back at the Boxing Day sale, it's not like that.”

Howard’s comment is an insulting indictment of the Australian electorate who are only all too aware that the term is three years, almost half of which is spent is spent campaigning for the next term. In his essay “Bipolar Nation: How to win the 2007 Election” (extract at New Matilda) written earlier this year, Sydney Morning Herald political reporter Peter Hartcher examines the contradictions that lie at the heart of Australian politics. Hatcher shows how Kevin Rudd has drawn away Howard’s core constituencies and undermined his fundamental arguments. Hartcher’s thesis is that Australians are economically secure and yet anxious about the future. He explores these themes under the banners of The Lucky Country and The Frightened Country.

The Lucky Country was Donald Horne's 1964 book about the complacency and mediocrity he saw in Australia’s ruling class. “Australia is a lucky country,” he wrote, “run mainly by second-rate people that share its luck.” The book was intended as a critique of a derivative society hostile to originality and expertise. The book’s title became misunderstood as praise for the country not a warning. But Horne was prophetic. Australia’s luck did run out in the seventies and eighties. Between 1970 and 1990 the country’s average income dropped from fourth in the world to fifteenth. Australia was well on the way to becoming what Lee Kuan Yew called “the poor white trash of Asia”.

But when Lee visited Australia in 2007, he said his comment was aimed at the discriminatory immigration policies which ended in the 1960s. He admitted Australia had changed for the better since then (Ruddock's policies notwithstanding). When interviewed by Hartcher, Horne too agreed Australia was now a different place. He hailed the economic reform program of the Hawke-Keating government as the “threshold moment” for Australia and one which arrest the country’s slide down the ranking of wealthy countries.

In 1983, the new Labor government slashed the tariff walls that protected the economy from competition. Labor’s industry minister John Button described manufacturing as an “industrial museum” while finance minister John Dawkins said the country had “first class living standards with a third class industrial structure”. With the tariffs gone, Paul Keating released the tightly controlled finance system and liberalised the wage structure. It was as necessary as it was unpopular. His courageous acts left him with few friends even within the Labor movement. “Not that one has a check list, but you do get around to offending everybody,” he told Hartcher. "But somebody has to give the country a break."

After a recession “we had to have”, Australia’s boom began in 1991. It is still humming along 16 years later. It comfortably survived the Asian economic crisis of 1997. But Keating didn’t. By then a vengeful electorate had tired of his “big visions”, high interest rates and fatal hubristic streak. The people gave John Howard’s Liberals a landslide win in 1996. The time lag between implementation and success meant it would be John Howard who would reap the benefit of Keating’s revolution. While the Coalition have added Reserve Bank independence, the GST and budget transparency, it is the Keating reforms that remain at the heart of Australian prosperity.

Howard successfully claimed ownership of the boom because Labor deserted the field. Because of Keating’s unpopularity, they never trumpeted their own success. Labor retreated into its traditional preoccupation, how to redistribute wealth not how to create it. Not until 2005 was Keating was rehabilitated and it took another year for Labor to fight back on economic credentials. In August 2006, Wayne Swan reminded (hansard pdf) John Howard that interest rates reached 21 per cent under his time at Treasury, 4 points higher than the Keating record.

Incredibly, it was the first time the Opposition used this tactic since Howard became Prime Minister. After a decade, Labor has finally re-entered the economic argument and started to take credit for its own accomplishments. With a self-styled “economic conservative” now at the helm, feted by the last three Labor PMs at his conference, Labor may finally be able wrest economic credibility back from the government. At his campaign launch speech last week he finally outflanked Howard on the economy. “I have no intention today of repeating Mr Howard’s irresponsible spending spree.” The Labor faithful, the press gallery, and probably the electorate, all lapped it up.

However, economic credibility is only half the battle. In his 7.30 Report interview last night, Howard reminded the viewers that “national security is being looked after”. Howard is aware that a fearfulness sits at the heart of Australia’s relationship with the outside world and has long capitalised on this fact. This is theory of The Frightened Country, that occupies the second half of Hartcher’s essay. The Frightened Country is also the title of a book by former diplomat Alan Renouf.

Renouf argues that Australia’s irrational fear of its neighbours is central to the national psyche. The country has always been a follower, either of Britain or of the US and rarely ventures into its own international policy making. There have been a succession of foreign ‘bogeymen’ such as the Russians, the Chinese, the Japanese, the Soviets, and in more recent times the Indonesians. Australia relies inordinately on the Anzus Treaty signed in 1951 but the wishy-washy text of the treaty declares the parties would only act “to meet the common danger in accordance with its constitutional processes”. Howard and his foreign minister Alexander Downer love to talk about the treaty but they never mention the fact that those inconvenient “constitutional processes” remove the sense of obligation.

Nor do they talk about the time in 1964 when Australia, which was worried about the Indonesia Reformasi crisis, invoked the treaty for the first and so far only time. The US refused to help. Nor did Howard enjoy the reaction of Clinton’s National Security Adviser Sandy Berger, who, when asked to support an international military coalition in East Timor, testily compared Australia’s problem to his daughter’s messy apartment.

Nevertheless Howard is a deft handler of the fear factor. According to Hartcher, Howard first prods them so people are aware of their fears. Then he offers reassurance. He has used this double strategy to keep troops in Iraq. His argument is if we remove them it would be a propaganda coup for terrorism and increase the number of terrorists in Indonesia. Implicit is the argument that Howard’s putative terrorists would be a threat to Australia. Despite the polls saying Iraq was an unpopular war, Howard’s appeal to fear resonated far stronger in the electorate than Latham’s 2004 promise to bring the troops home by Christmas.

However the elevation of the former shadow foreign minister to the Labor leadership has changed this ballgame too. Rudd was an unapologetic supporter of the Iraq war. Rudd was unable to seize this agenda and has remained remarkably quiet about it in the election campaign. He has relied on the Prime Minister to concede the running with a bad mistake. Howard made just such a blunder when he criticised Barack Obama’s call for total US withdrawal from Iraq equating it support for Al Qaeda. Obama underlined the flaw in Howard’s argument when he noted Australia’s small contingent in Iraq. He suggested Howard “calls up another 20,000 Australians and sends them to Iraq.” That was the end of the argument. John Howard was never prepared to put the bodies of the Frightened Country on the line. In the endgame, it is the emperor who has lost his clothes. The bogeymen and the bipolar nation have moved on. Neutralised on security and outflanked on economic credibility, the Liberals have failed to gain any traction in the opinion polls and the main topic of political debate is now the margin of Labor’s win. Former Labor powerbroker Graham Richardson is today predicting a Labor landslide and a swing of six to seven percent (it needs 4.88 per cent to win). "I think people have just stopped listening to John Howard,” he said “He just stayed too long."
Posted by Derek Barry at 11:33 pm

Ah dear blogger, you sing my song in so many ways, but mainly through your apparently carefull research and informative links.

I usually finish up spending more time out there in link-land than I do here, because the links are so very appropriate to your article, and generally deep enough to engage.

Little time to comment these days, but can I say that your site is a regular visit and a damned good read. Every time.

Many thanks. Appreciate you taking the time to visit the site and leave your comments.

Its pleasing to know people are getting something out of it.

Excellent logical post ... and it saddens me a great deal that only a tiny percentage of voters have any idea what you are talking about.
The rest are just as intelligent as the dimwits who sickened me on ABCTV's Four Corners policies edition last week - Kaths & Kels all of them.
*sigh*