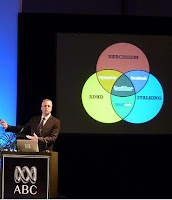 I’ve just finished watching ABC boss Mark Scott display his fine sense of humour for the second time in four days. Tonight I watched his flagship ABC1 channel where Scott was justifiably praising the wonderful Andrew Olle lecture given by Chaser executive producer Julian Morrow. Scott said Morrow and the Chaser team were the reason why the ABC legal team had quadrupled in size. He said Morrow was the reason for his grey hair and letters he gets from Gerard Henderson and also suggested that Morrow could afford a Lachlan Murdoch-like $23 million Sydney mansion if he was prepared to rely on his ABC salary for a thousand years. (photo of Mark Scott at Media140 by Neerav Bhatt)

The self-deprecating wit hides a very sharp brain of a man who is now probably the second most important media player in Australia (behind Lachlan’s Dad). He acknowledged Morrow's important points about primary and secondary audiences and how the ABC should react to them. He also endorsed Morrow's points about the importance of new media. The head of Australia’s foremost public broadcaster has used a number of key speeches to throw his weight behind the new media revolution and he was in zealot mode again on home turf at Ultimo on Thursday when he made the keynote speech for day 1 of Media140 Sydney. Scott’s introduction to Twitter is typical of many people’s experience (including my own) with an initial period of scepticism, followed by silence and then eventual acceptance. Scott said he signed up in late 2007 and followed just one person: Ana Marie Cox (the American political blogger who founded Wonkette).

Scott said he quickly became “bored and confused” and his interest in the tool faded away. He quoted co-founder Biz Stone's statement that "if there were two or three sentences I'd use to describe Twitter, one of them would be 'I don't know'". It wasn’t until February 2009 that he re-engaged with Twitter and “came to understand it”. Scott’s epiphany was due to the Victorian Bushfires emergency. As the scale of the devastation started to emerge on Black Saturday, the ABC local radio station 774 Melbourne’s twitter hashtag became an increasingly vital hub of information using the hashtag #bushfires. Scott praised ABC staffer Wolf Cocklin (@wolfcat) who manned the Twitter feed for three days solid passing information to and from the broadcaster, the CFA, the police and members of the public.

Inspired by WolfCat, Scott returned to Twitter and quickly became enamoured of its possibilities. But while he joked about his assiduous management of the number of his followers, he said Twitter was just a technology and it was communication that counted. He reminded the audience of the famous Henry David Thoreau quote: “We are in great haste to construct a magnetic telegraph from Maine to Texas; but Maine and Texas, it may be, have nothing important to communicate.”

But Scott did have important things to communicate in his speech. He used the occasion to announce two new ABC online initiatives. Firstly he was commissioning 50 digital media producers help local communities to create their own content and secondly was the launch of “ABC widgets” to allow people run broadcaster news feed content from their own blogs and social media pages. As Margaret Simons noted, the issue will be whether commercial media organisations selling ads would also be allowed to use the widgets.

Scott also provided a set of four guidelines for ABC staff using social networks. These were 1) do not mix professional and personal conduct in ways likely to bring the ABC into disrepute 2) do not undermine work effectiveness 3) do not imply ABC endorse personal views and 4) do not disclose confidential information. The guidelines are straightforward and encourage journalists to engage with social media rather than be afraid of them.

With Murdoch-led paywalls on their way, it is crucial that ABC journalists have the right tools available to them to provide a useful free-to-net alternative for those unable (or unwilling) to afford to buy their news. As the Reuters Institute for the Study of Journalism notes, social media, blogs and user-generated content are not replacing journalism, but they are creating an important extra layer of information and opinion. Most people are still happy to rely on mainstream news organisations to sort fact from fiction and provide a filtered view. But these people are increasingly engaged by this information, particularly when recommended by friends or other trusted sources. With Mark Scott at the helm, it appears the ABC are well placed to become leaders in this new exciting field.
Posted by Derek Barry at 1:06 am