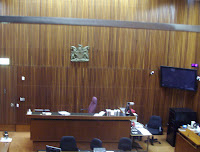 This blog post is inspired by an online discussion I had with Julie Posetti, Jason Wilson and others today. A conversation that began about Posetti's question on how to deal with corrections in the online world evolved into a discussion about defamation on Twitter. It was Wilson’s contention that when we tweet we publish and we should therefore consider our words with great care before sending them out in the world. I agreed but didn’t see it as a huge problem. Wilson saw it as an issue of how to resolve tensions between online behaviour and community standards expressed in laws. He may be right. The growth in cases such as the Facebook Six shows that online life is increasingly affecting life away from the computer. (photo by Derek Barry)

The conversation with Wilson reminded me of remarks he made earlier this year in relation to Internet indiscretions in the Quadrant hoax affair. Wilson said that bloggers and commenters who discussed the identity of the hoaxer could have ruined the reputation of someone if they happened to be wrong in their very public opinions. At the time, he recommended a book called The Future of Reputation by a US legal scholar Daniel Solove which discusses some of the problems in this area. Tonight I finally got around reading the opening and last chapters of Solove’s book which is available as a free download.

The Future of Reputation is informed by issues at the boundary of privacy and free speech. The evangelists of the Internet would have it that free speech trumps everything. This is arguable perhaps in the US with its First Amendment provision but certainly not supported by the law of defamation in Australia. Here if you say something that damages a person’s reputation you better be able to prove what you are saying is true because the presumption of innocence does not apply to publications. If you write something down in a public context, then you are liable for your actions.

The Internet has the ability to enforce social attitudes of approval or disapprovals, or norms, as they can be called. The enforcers are the “norm police” who confront errant behaviour in order to keep the norm strong and effective. With a billion and a half online, there is as much a need to be as accountable for actions in cyberspace as there is in meatspace. But the ease in which moral outrage can spread across the Internet can create a mob-driven police state.

Because blogs have not been around for long there is a double danger. There is unprecedented power to spread messages compounding an underdeveloped set of norms to keep people in check. Journalists have ethical codes that act as restraints but bloggers generally do not. Google has replaced the private investigator as a way of finding out everything about people. Fragments of public data about us are strewn across the Internet (btw should anyone go Googling me, I am not to be confused with “Derrick Barry”, an American gentleman who is apparently the world’s best Britney Spears impersonator. I lack his singular talents).

The Internet is a cruel historian. The social practice of gossiping, spreading rumours and shaming have all moved to the Net. There they transform from “forgettable whispers” to the scarlet letter of permanent memory. But protecting people’s reputation may mean curtailing other people’s free speech. The law needs to take a wise middle path that does not chill speech but still prevents people from injuring others online. Social networks are a marvellous invention of creativity and connection but they redefine what is meant by private lives. We grapple with reputation, gossip, shame, privacy, norms and free speech and weave them into social tapestries of immense complexity.

Solove recommends lawsuits as a way of seeking redress if reputation is sullied but the law should encourage informal attempts at resolution. Privacy needs to be re-defined for its properties of accessibility, confidentiality and control. Free speech can be reconciled with privacy by allowing anonymous stories. But Internet authors should remove defamatory material if requested. Often this is all that is required; there is no additional financial impost.

There are downsides. Products like Reputation Defender act to “clean up” an online reputation but also could be used to whitewash inconvenient truths. According to Solove, the law is “a subtle instrument but not quite a violin”. It is puny compared to norms and these will largely determine how privacy will be protected in the digital world. As President Obama recently reminded American school students, individuals who write on blogs and Twitter and Facebook should always think about the impact of the words they use. Some day they may come back to haunt the person who wrote them.
Posted by Derek Barry at 12:52 am

... referencing others similar, and the recent Farcebook-related teen-suicide in Geelong Victoria.

2. slackbastardBlogger gave an online personal opinion of minor TV celeb DylanLewis and was successfully suited by the agent of DL, a lawyer by trade.
IMHO this case was particularly evil.

hadn't heard about the slackbastard/ Dylan Lewis case but surprised he didnt have the fair comment defence that it was an opinion not a statement of fact (though it has to be an opinion based on provable facts).

at this entertaining and informative link there is a further link to MachineGun Keyboard's rant about it 'Sue bloggers till they shut up'.

2. (not connected) Just enjoyed reading the wonderful thriller The Ghost, by a journalist Robert Harris who has sold for million$+ several of his novels as screenplays.
Get cracking DB!

where do you lie in the world ratings of Britney Spears impersonators?

haha! just ahead of that little known dual tribute band Spears for Fears

... and just behind The Speardrop Explodes ?