A real breath of fresh air on the Australian blogging scene is Tim Burrowes at Mumbrella. The former editor of B&T magazine is one of the few bloggers who actually breaks stories and he broke two good ones today. Just minutes ago, he revealed that the viral Twitter messages that a plane on fire caused Melbourne airport to close this evening were a gross overreaction. While it was true that a passenger reported seeing fire from the left wing of a Boeing 767 this evening, the plane was cleared after eight minutes and there were no further consequences. But while Burrowes confirmed there was no fire with a quick phone to the airport, the Twitter world was happier just to repeat the "plane on fire" news ad infinitum in an Australian version of the Hudson plane landing incident. But in this case, the airport press office was justified telling Burrowes that “unfortunately the Internet is full of gossip.”

In scotching the rumours, Burrowes exemplified the remarks of Jason Wilson’s provocative post at Gatewatching last week by showing that “journalists use telephones”. Burrowes was also on the phone earlier today after he read one of the more contentious entries of the 2,400 submissions to the review of Australia's two national broadcasters, the Australian Broadcasting Corporation (ABC) and Special Broadcasting Service (SBS). The government will review the submissions ahead of the broadcasters' next funding review in July this year.

Burrowes’ interest was in the submission by Astra, the peak body representing Australia’s subscription TV industry. In their submission, Astra were critical of the plan to give six new digital channels to ABC and SBS. Astra picked on the point made by ABC’s managing director Mark Scott that the new channels (in areas of news, children’s entertainment and foreign language programming among others) addressed a “market failure”. Astra denied there was a market failure and said they were (or will be soon) delivering similar products to what ABC planned to deliver. It was a persuasive argument if you leave out the fact that just two million Australians subscribe to pay TV and that leaves a potential market failure for 19 million others.

Nevertheless the newsworthy element that Burrowes noticed was an Astra comment that the public broadcasters are doing aggressive deals that lock out pay TV from showing up-to-date content. They claim “ABC and SBS have included pursuit of commercial terms which seek to ensure longer than industry standard ‘hold back’ clauses in production and acquisition deals, and in some instances the ABC in particular has been willing to pay more for content to ensure this happens”. The result is that pay TV has to wait longer to get content for re-run and Astra says this is contrary to ABC 1983 charter goals (a charter Astra says is out of date as is the 1992 Broadcasting Act). 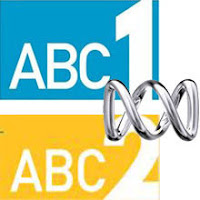 Once again Burrowes picked up the telephone and spoke to both SBS and ABC today for comment on Astra’s accusation. SBS firmly denied the claims and gave examples where SBS and Pay TV have cooperated in acquiring broadcast rights. Their spokesperson also told Burrowes that they often allow World Movies Channel and other pay TV channels to run content first. The ABC spokesperson was similarly dismissive: “The ABC is not sure how ASTRA can justify such claims of warehousing when there are many examples of rights sharing of programs between the ABC and the subscription channels” he said. But this controversy is not likely to go away and Burrowes may have reported on what is likely to be the opening salvo of a long running debate between the public broadcasters and the Pay TV industry for hearts, minds and control of the digital spectrum.
Posted by Derek Barry at 9:40 pm