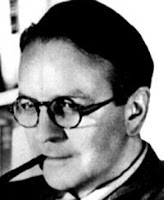 Next year marks the fiftieth anniversary of the death of the great American crime writer Raymond Chandler, creator of the fictional detective Philip Marlowe. Anniversary books have started to emerge with the New York Times review last week of Judith Freeman’s “The Long Embrace: Raymond Chandler and the Woman He Loved” about his 30 year marriage to Cissy Chandler. The Irish city of Waterford should also have a part to play in any celebrations as his mother came from the city and both the mother and her only son spend many summers in the city at the turn of the 20th century.

In his book “Brief Encounters: Meetings with remarkable People”, Waterford-born author and radio documentary maker Bill Long (he also wrote a history of Irish lighthouses) wrote about his meetings with Chandler in London in the summer of 1958. The pair were neighbours; they met several times that summer and became friends largely due to the Waterford connection. On their first meeting, Chandler correctly picked Long’s Waterford brogue which pleased the American greatly as he deemed himself a “great judge of accents”.

Chandler’s mother Florence Thornton was from an old established Waterford Quaker legal family. The Thorntons had offices in Waterford, Cork and Dublin and Raymond inherited Thornton as his middle name. He told Long his mother was one of the Thorntons of Cathedral Square. According to Long he was grinning at the time “with the shadow of a cynical smile and the slightest edge of mockery in his tone”. Chandler enjoyed describing the family with mock pomposity: “I. Thornton and sons, solicitors and notaries public,” he intoned.

Chandler first went to Waterford with his mother after his alcoholic American father deserted the family when Ray was just seven. The Thornton family rallied round and they arranged for Florence and her son to leave America. After a short period in Waterford, they settled in London with a grandmother and aunt. For many of his pre-teen and teenage years, Chandler and his mother spent every summer in Waterford. “Uncle Ernest – my mother’s brother that is – was the head of the family then, and of the legal practice. Ruled both with an iron hand in an iron glove. A regular old tyrant was uncle Ernest! Upper middle class Protestants the Thorntons and god-awful snobs! Not just Uncle Ernest but the whole family were god-awful snobs. Full of bloody righteousness. Tension in the house all the time. And every goddamn thing had to be Protestant. The maids, the cook, even the man who worked in the garden.”

Despite the snobbery, Chandler was happy on his holidays. "I always had a good time in Waterford," he told Long. Chandler loved to reminisce about the upper-class Waterford families. There was the Dawneys, the Grubbs, the Carews and the Congreves, mostly Quaker or Protestants at whose homes he played tennis and croquet. Long noted Chandler’s childhood experiences in Waterford made an indelible impression. Summers with the Thorntons gave him an appreciation of social distinctions in a society which Long described as “neither urban nor rural but county”. Chandler admitted the Thornton snobbery had rubbed off on him. He hated to be called an Irish American because in his estimation that usually mean “Catholic and working class”. The Thorntons, he said, "saw to it that I grew up with a ferocious contempt for Catholics and to this day, I have a problem with that”. He continued, "the only Irish patriots with any brains came from the professional classes”. To Chandler, this meant being Protestant, but Long thought the real issue was not religion but class and education. Chandler thought it was more important where people came from rather than where they were going.

During his holidays, he enjoyed walking around the Mount Congreve estate a few miles outside Waterford on the banks of the River Suir. The Congreves were fellow upper-class Protestants and clients of the Thorntons. Chandler preferred some of the homelier aspects of the estate. “What I remember best,” said Chandler, “is the smell of the tobacco the old bothy-man smoked in his enormous bent-shank pipe. I remember resolving when I was ten or eleven at Mount Congreve to smoke a pipe when I grew up. And by God, I did and still do!” 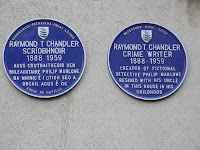 The city also left an indelible imprint on the writer. He and Long swapped childhood memories of a long-gone bookshop in Cathedral Square. The shop was called Stickyback Power’s. Power is a common Waterford name but neither Chandler nor Long could remember why this Power gained his unusual nickname. Chandler loved the bookshop and told Long about the germ of an idea to set a Philip Marlowe novel using Waterford and the bookshop as locales. The storyline had Marlowe on holidays in Ireland and in a pub on the quays in Waterford. There he witnesses a sailors’ brawl. Later he hears one of the sailors has been murdered in the brawl and his body has been found slumped in the corner of a bookshop. Marlowe agrees to the captain of the ship’s request to investigate the murder which leads him into the low life of the city and he discovers a vicious prostitution racket.

Having given Long an outline of the plot, he asked him whether there was ever much prostitution along the quays. Long said Chandler wasn’t really interested in the answer and the project never came to fruition. Chandler’s health was poor in 1958 and his workrate was low. Long never met him again after that summer and he found out that Chandler died a year later of pneumonia at his villa in La Jolla, California. Chandler never returned to the city of his childhood but never forgot it. “You know of all the places – and I mean all the places – I’ve lived in,” he told Long, “Waterford is the place, that in the mind, draws me back all the time.”
Posted by Derek Barry at 7:07 am

How could Bill Long ask such a silly question as "is there prostitution near piers/wharfs/docks/sailors"
doh.

I adore the writing of Chandler, but have trouble imagining Mr Marlowe wanting a vacation - there would have had to have been bigger eeason to get him across North America and The Atlantic.

Robert B Parker finished Poodle Springs ... maybe this storyline is next.

I'll take it anyway I can get it.

PS you have one little typo in there 'robbed off on him' for rubbed.

Wishing you all good things in 2009

While I'd agree that normally the 'prostitutes near docks' question is a bit redundant, it is reasonable enugh for a fairley conservative small town like Waterford and it was something I wondered myself after reading the exchange. And if there is, (and I'd agree there probably is, or was - the docks have mostly moved out of town now) then, like Bill and Ray, I don't know anything about it.

Thanks for the pick-up on the typo.

There is a short film based on the tentatively sketched Marlowe story called Nun More Deadly.
www.youtube.com/watch?v=PuIYmKYDX54