Sayyid Qutb: the father of Islamism

The name Sayyid Qutb is little known outside the Muslim world but he is a significant voice of the 20th century. Although dead for over 40 years, he and his movement the Muslim Brotherhood remain a giant influence on Islamic politics and a guiding light for radical Islamists. In the last month, Qutb's name has been all over the news. The International Herald Tribune's HDS Greenway said Al Qaeda drew their inspiration from him. The Pakistan Christian Post gives an interpretation of Sufism drawn from Qutb’s writings. The American Family Security Matters said Islamic youths were rebelling “in the footsteps of Qutb". Indian Muslims calls him a pioneer of contemporary Muslimism and British theological think-tank Ekklesia calls him “the father of modern Islamism”.

Born in Egypt in 1906, Sayyid Qutb is now also considered the guide of the modern jihadi movement. Hia book Milestones (written in an Egyptian prison) is now a standard in Islamic education and is an honoured text of jihadi groups. Yet in many respects, Qutb was quite ordinary. He worked for the Egyptian ministry of education as an inspector of schools where he gained a reputation as an intellectual. In 1948 he did a scholarship at Colorado State College of Education to study the US educational system. He didn't like what he saw in America. A conservative Egyptian, he loathed the licentiousness he saw around him. He opposed Western imperialism and materialism and was appalled by the immorality and corruption of the Christian West.

Qutb was influenced by the ideas of Maududi, the man who founded Jamaat-e-Islami in British India (now Pakistan) in 1940. Maududi in turn, was inspired by Ibn Wahhib whose 18th century conquest of the Arabian peninsula was based on the idea of a purer Islam. Maududi was translated into Arabic and his ideas spread across the Muslim world. Qutb acknowledged his influence saying the freedoms of Western women were an illusion. In his view a woman is better protected by the paternal Islamic state rather than be a sex object for by any random passer-by. Qutb's ideas spread through the Brotherhood.

The Muslim Brotherhood (Jamiat al-Ikhwan Muslimum) began after the collapse of the Istanbul caliphate in 1924. In Egypt, Hasan al-Banna was upset by his country’s new secular constitution. Al-Banna was a schoolteacher who hated the evils of modernity. Like Maududi in India, he wanted his new state to become Wahhabist. Al-Banna found the Brotherhood in 1928 with a manifesto which read: “God is our purpose, the Prophet our leader, the Koran our constitution, Jihad our way and dying for God our supreme objective”.

But the short-term objective was to survive. In its first 10 years, the Brotherhood was preoccupied with recruitment and propaganda against modernisers and communists. Critically Al-Banna kept his organisation aloof from the growing Egyptian pro-Nazi movement. Under the front of a social movement, he developed the Brotherhood’s political credentials. After World War II, he collaborated with the British against the Communist Party by unleashing a terror campaign against left wing leaders. They also bombed theatres and attacked Jewish interests.

In 1948 the Brotherhood killed the head of police, which was one step too far in their extra-judicial campaign. The Farouk Government responded by banning them. In retaliation, they assassinated Prime Minister Nuqrashi Pasha. In a tit for tat,a government agent killed al-Banna. His loyal deputy Sayyid Qutb was appointed Supreme Guide. Qutb was highly respected for his resistance to compromise, his honesty, integrity and his austere lifestyle.

By then, the movement had grown to 250,000 members and was a significant threat to state power. In 1952, the Free Officers led by Gamal Abdul Nasser launched a coup against British interests and forced Farouk to abdicate. Four of the 18 Free officers were Brotherhood members. Nasser turned on the Communists and took over in a de facto alliance with Qutb who had one third of the power.

But when the Brotherhood demanded Shari’a Law in Egypt, Nasser turned on them. They were banned again in 1954 and Qutb and others were arrested. In prison he wrote Ma'alim fi'l-tareeq ('Sign-posts on the Road'), usually translated as Milestones). It became an international bestseller and an inspiration for global jihad after his death in 1966. Some scholars called the book turgid, repetitive and uninspiring, but it had massive impact on later generations of Muslims.

The core of Qutb’s ideas is a return to ths supposed purity of the earliest Muslims. This is jihad in the name of Allah and his prophet Muhammad and social justice according to the laws of God. Qutb said Islam abandoned its purity in the generation that followed Muhammad and only a return to the “true faith” could save it. A two-phase jihad was needed. Preaching and persuasion would be followed by physical power to abolish an oppressive state apparatus. His bleak message was a direct challenge to Nasser’s secular regime. 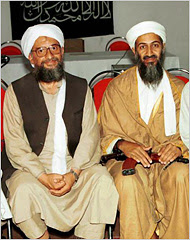 The Brotherhood remained active despite Qutb’s arrest and launched several attempts on Nasser’s life. Three attempts in 1964 were the last straw. Mass arrests followed. Already in jail, Qutb was charged with treason and plotting a Marxist coup. After a show trial he was executed in 1966.

His legacy was preserved by his brother Muhammad who fled to Saudi Arabia where he became an influential professor of Islamic studies. Among those to study under Muhammad Qutb was Osama Bin Laden. Bin Laden’s al-Qaeda network borrowed directly from Sayyid Qutb’s ideas of jihad. More importantly, Qutb shows the US and Israel are not Al-Qaeda’s targets. What they want is the abolition of the corrupt Saudi regime and the liberation of the holy cities of Mecca and Medina in the name of a purer Islam.
Posted by Derek Barry at 8:53 pm