UN officials in Eastern Congo are blaming rebel leader Laurent Nkunda for forcing almost a quarter of a million people from their homes since the start of the year. Nkunda’s forces are responsible for forcing 230,000 people into refugee camps in the city of Goma which straddles the border with Rwanda. The displacement camps are full again for the first time since the end of the war in 2004 and the UN warns that Congo could be on the brink of another all-out conflict.

Nkunda is a member of Congo’s Tutsi minority and claims he is merely protecting the Tutsi population from violence of Hutu extremists who fled into Congo from Rwanda after the 1994 genocide. Yet Nkunda is also claiming a greater Rwandan kinship that sees both Tutsi and Hutus victims of violence at the hands of Congolese people. Like others from his community he alleges the country’s million strong Kinyarwandan speaking people – both Tutsis and Hutus – have long been discriminated against. Hutus have inhabited parts of North Kivu for centuries, but there were influxes of Tutsis and Hutus from Rwanda to Congo in the 1930s and 1960s, populations who today complain they are treated with contempt.

Nkunda himself was born to a Tutsi family in North Kivu in Congo in 1967. He studied psychology at university before joining the Rwandan Patriotic Front's (RPF) rebellion against the Hutu-led Rwandan government (FAR) in 1993. It was this extremist Hutu government that authorised the genocide that killed upwards of half a million Rwandan Tutsis in the first half of 1994. However, they were distracted by the slaughter and allowed the RPF to claim control of the capital Kigali by July 1994.

After the genocide, the Hutu Interihamwe militia fled into neighbouring Congo where they became known as the ex-FAR. The ex-FAR continued to harass and slaughter the native Tutsi population including both of Nkunda’s parents. The young Nkunda also came back to Congo after the end of the Rwandan war and help Joseph Kabila’s fledgling rebel army. In 1996 the Rwandan army came across the border to help Kabila’s defeat both the Interihamwe and their backer – long-term dictator Mobutu Sese Seko. Joseph Kabila finally overthrew Mobutu in 1997 but then turned on his Rwandan backers.

Nkunda meanwhile became a senior officer in the Rwandan-backed Rally for Congolese Democracy-Goma (RCD-Goma), one of the main rebel groups fighting in DRC from 1998 to 2003. In 2004 he was named general in a new national Congolese army created from troops of the dissident forces at the end of the war. He refused the post and withdrew with hundreds of his troops to the forests of Masisi in North Kivu. Nkunda controlled the former Sominki (Société Minière et Industrielle du Kivu) Rwandan export trade (pdf) in cassiterite (found in coltan ores). In August 2005 he announced a new rebellion but launched no military operations at that time.

The government and the UN issued a warrant for Nkunda’s arrest in September 2005. But Nkunda remained at large. At the start of the following year his forces attacked Congolese government soldiers and occupied several towns in North Kivu province. After a brief period of calm, they resumed combat. They attacked and raped civilians and looted their property. Tens of thousands of Congolese were forced to flee to neighbouring areas or across the border to Uganda. 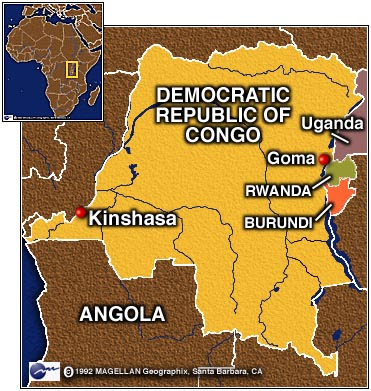 In February 2006, the US based Human Rights Watch (HRW) called on the UN and the Congolese transitional government to arrest Nkunda and charge him with war crimes. HRW claimed his whereabouts were well-known to authorities since the arrest warrant was issued. “The police and army have done nothing about arresting him,” said Alison Des Forges, senior advisor to the Africa Division of Human Rights Watch. “So long as Nkunda is at large, the civilian population remains at grave risk.”

The reason that Nkunda remains at large is mainly due to the influence of Rwanda. While officially Rwanda does not condone his activities, they say they are sympathetic to his case and “can understand his argument”. Rwandan Foreign Minister Charles Murigande told the Washington Post that the root cause of eastern Congo’s instability is not Nkunda but the ex-FAR. “It's like saying, if we didn't have these Tutsis, the ex-FAR would not have people to kill,” he said. “It is an ugly way of seeing things, but, let's hope that which is just will prevail”.
Posted by Derek Barry at 10:31 pm

True words: “It's like saying, if we didn't have these Tutsis, the ex-FAR would not have people to kill,” he said. “It is an ugly way of seeing things, but, let's hope that which is just will prevail”.

The ex-FAR is the real harassement. Not only to Tutsis, but to all men, women, childs and animals (for example Mountain Gorillas)

However eventually all renegade generals including Nkunda will need to be disarmed for any real chance of peace to emerge in Eastern Congo.

Ultimately that must mean some form of independence from the central government though its difficult to see how Kinshasa will ever agree to it.

Nkunda's armed conflict has nothing to do with protecting a minority. It is a war of proxy with its architecture in Kigali. Nkunda will some day face justice for crimes that he perpetrated against his own countrymen in Kisangani, Bukavu and now in North Kivu. It is not over until the fat lady sings...and she has not

Germany's foreign minister called Rwandan President Paul Kagame over the bloodshed in Democratic Republic of Congo, saying Kigali was "crucial" to stopping the violence, a spokesman said Friday. I think that proves that all this talk about ex-FAR is total crap. Kagame does not want democracy in his own country and does not want to admit that his own soldiers under his command and control have committed attrocities that would merit his life imprisonment in Scheveningen, the Hague.

PRLog (Press Release) – Nov 26, 2008 – A web site calling for the U.N. peacekeeping mission in the Congo (known by its French acronym MONUC) to immediately arrest Laurent Nkunda to face justice for war crimes and crimes against humanity, has been launched according to project coordinator, Amede Kyubwa.

The web site, http://www.arrestNKUNDAnow.org , provides information about war crimes and crimes against humanity committed by troups under Nkunda 's command since 2002 . The website is also launching a petition calling on concerned people around the world to demand that MONUC immediately arrest Nkunda for war crimes and crimes against humanity. The U.N.'s biggest peacekeeping mission will soon be over 20,000 in Congo "must ensure that those responsible for serious violations of human rights and international humanitarian laws are brought to justice" said Mr. Kyubwa.

Nkunda is accused of multiple war crimes and crimes against humanity of which most cases are well documented by various human right organzations including Amnesty International and Human Rights Watch. In September 2005, the Congolese government issued an arrest warrant for Nkunda, accusing him of numerous war crimes and crimes against human rights. Human Rights Watch, for example, which has been calling for his arrest for war crimes and crimes against humanity since February 2006 has documented summary executions, torture and rape committed by soldiers under the command of Nkunda in Bukavu in 2004 and in Kisangani in 2002. Also armed groups loyal to warlord Nkunda have been repeatedly accused of using rape as a weapon of war and the recruitment of child soldiers, some as young as 12 after the abduction from their homes.

According to Mr. Kyubwa, NKunda continues to be involved in the committing of crimes in DRC, and in particular in the province of North Kivu, where again groups armed acting under his command are reportedly responsible for killing civilian systematically in the town of Kiwanja. The continuing horrific killing of civilians testifies that Human Rights Watch was absolutely reasonable in its warning then in 2006 and it’s today. “So long as Nkunda is at large, the civilian population remains at grave risk"

The website http://www.arrestNKUNDAnow.org encourages concerned people around the world to sign a petition to demand that MONUC immediately arrest Nkunda for war crimes and crimes against humanity. For more information please call the project coordinator in the United States , Amede Kyubwa at (916) 753 5717 or email: arrestkundanow@hotmail.com

DO SOMETHING FOR THE VICTIMS OF SEXUAL VIOLENCE IN CONGO: help put pressure on president Kabila, the Congolese government and the Congolese Parliament to take urgent action to compensate victims of sexual violence crimes in East of DR Congo. The petition can be signed at http://www.gopetition.com.au/online/26180.html