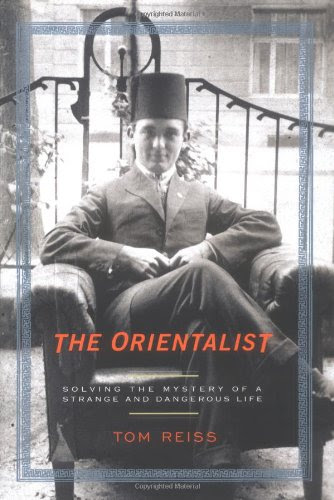 Kurban Said was a bestselling author in Nazi Germany. He also wrote successfully under the name of Essad Bey. He married an heiress who was convinced he was an exotic Eastern potentate. But Kurban was not who he Said. His real name was Lev Nussimbaim and he was a Jew from Baku, the son of German governess and a Jewish oilman.

Tom Reiss wrote a book about him called The Orientalist. The word 'bizarre' does not begin to do justice to Nussimbaim’s life. He was perhaps inspired by Walter Rathenau a German Jewish industrialist and foreign minister in the new Weimar republic who was assassinated in 1922 by two right-wing officers who protested his signed of the 1922 Treaty of Rapallo (the earlier 1920 Treaty of Rapallo authorised the independence of the state of Fiume, now Rijeka, Croatia) with the Soviet Union. He (Rathenau) was also said to be the inspiration for Arnheim in Robert Musil’s The Man Without Qualities.

Kurban Said's great work was the interreligious love story "Ali and Nino". Set in the First World War and the Russian Revolution, it is a story about an Azerbaijani Muslim boy falling in love with a Georgian Christian girl. The novel was first published in 1937 and was set in the oil city of Baku. Baku is now the capital of Azerbaijan. It was a multi-ethnic city of Muslims, Turkics, Armenians fleeing from Turkish genocide, Poles and Russians. In the book it also had something rather vaguely called “Sectarians.” The plot is a tearjerker. The hero, narrator Ali Khan Shirvanshir, a Tartar and Shi'ite Muslim, flouts social convention by marrying his childhood friend, Nino Kipiani, a fair-skinned Georgian Christian. Ali rebels against his traditional society. His father's pre-wedding advice is sound, if alarmingly open to interpretation: "Do not beat her when she is pregnant." When war erupts, Nino is sequestered in a villa in Tehran where she keeps her pregnancy secret. She flees Persia to Paris with her baby daughter. Ali is reluctant to accompany her and instead marches off to defend the short-lived Azerbaijani republic against the invading Soviets.

It is easy to see why such a plot would be popular in pre Second World War Germany, both with men and women. The supposed author Kurban Said was feted as a great student of Muslim culture and indeed the book with packed with cultural references to Islam and its legacy. The Nazi Propaganda ministry became his unofficial sales arm by including his works on their list of "excellent books for German minds".

But while the Nazis were feting this Aryan hero, the real Said was all this time a Jew in Germany. When he was eventually found out and exposed as Lev Nussimbaum, as was surely inevitable, he fled across to then neutral Italy in 1938 where he died in poverty. It must have been a huge embarrassment for Nazi Germany to have this deception uncovered. So how come this massive transformation, this gigantic and bizarre fraud from which the author seeming had so much to lose? Surely it wasn’t just to make Germany look stupid?

Lev was born in 1905 at Baku to a family of industrialists who had recently become rich due to oil. Baku is on the Caspian Sea and oil had always bubbled to the surface on the foreshore. The oil business is not new. The Chinese had drilled oil since the 4th century and by the ninth century locals were drilling oil holes in Baku for the production of naphtha which may have been used as weapons or a writing tool.

By the fifteenth century it was being harvested for oillamps. Baku was half Asian, half European and wholly precious. The Persians originally called it Bad Kube (“the city of winds”). The Persians were in hock by 1813 and ceded Baku to the Russians, lock, stock and barrels, in the Treaty of Gulistan. The first commercial drilling occurred in the 1870s and by the turn of the century the Baku fields were the largest oilfields in the world. In short, Baku was a very important place in fin-de-siecle Western civilisation. The tsars and the communists knew its worth. Sergey Kirov made Baku oil safe for the Soviets as the secretary for the Socialist Republic of Azerbaijan (aided by his wife who led a feminist charge “Down with the Chador”.) 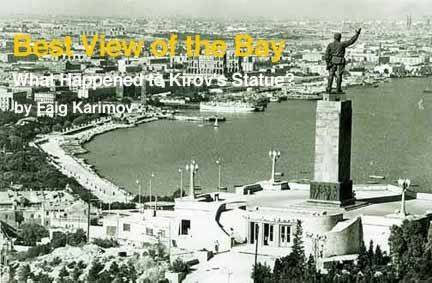 Its importance was amplified in the Second World War and Hitler and Stalin fought monumental battles in the Caucasus and at Stalingrad to secure the oil supply. Stalin had got his start in Baku. In 1905 he was the editor of the underground Bolshevik newspaper here called the Baku Proletarian where he agitated for the rights of the oil workers. He eventually had Kirov assassinated in 1934 to curb his growing power. At Stalingrad, it wasn’t nostalgia at stake but the fuel to supply tanks and armament factories. Baku is still an important place today. Although most of Baku’s onshore oil has been exhausted, there is now extensive drilling off shore.

Back in 1918, the First World War had ended, but the Reds were starting to win the Russian Revolution. Baku was no place for an oil industrialist under the Communists. Lev and his father fled Baku. Lev was 13 years old. Their trek took them through Turkestan, Persia and the Caucasus. The White Army briefly held Baku and the Nussimbaums returned. But the Reds took it back and Lev and his family fled again, this time to Constantinople. Here also was chaos as the Ottoman Empire was falling apart and Ataturk was making his play for power. They moved to Paris before settling in Weimar Germany. There was significant anti-Semitism (Hitler didn’t invent it but merely used it for his purposes)in 1920s Germany and hyperinflation increased the bad feeling that ‘Jewish industrialists’ were responsible for losing the war. Thus Lev was enrolled at Friedrich-Wilhelms-Universität under the name of “Essad Bey Nousimbaoum”.

Thanks to Lev’s travels as a refugee, he became an expert in Eastern religions. He converted to Islam in 1922. He invented a mysterious past for himself and said he was related to the Emir of Bukhara. He would also have been aware that Bukhara (in modern Uzbekistan) had a large Jewish minority and the term ‘Bukharan Jew’ was used to signify any Jew from Central Asia. In 1926 the Arabic “Nousimbaoum” was employed by the journal Die Literarische Welt. The journal formed a rallying point for the most significant authors of the time - Franz Blei, Robert Musil, Alfred Doeblin and Walter Benjamin. Lev cemented his reputation in this journal as an authority on Eastern matters. By the early 30s, he was a successful writer, his “Blood and Oil in the Orient” was a potboiler written under the name of Essad Bey and outlined his dramatic escape from Baku (but left out the fact he was Jewish). He was also an extreme right winger. He joined the League Against Bolshevism which was a breeding ground for Nazis though Lev himself preferred a return to the Hohenzollern monarchy that ruled Germany until 1918. He feted an Austrian baroness and married the daughter of an industrialist but neither of the women knew his true identity. When Hitler rose to power in 1933, it frightened the ex-Jew enough to move to New York.

The spell of Germany proved too strong and he returned two years later despite being well aware of the anti-Jewish laws that were springing up. It is in this stage that writer Tom Reiss in his engrossing portrait of Nussimbaum, claims he invented a second penname Kurban Said to write Nino and Ali. This fact not yet generally accepted in Azerbaijan where it is their national novel. They still attribute it to Azeri author and poet Yusif Vezirov Chemenzeminli who died in a concentration camp in 1940.

Nussimbaum outlived Chemenzeminli by two years. In 1938 he was eventually unmasked as a Jew. He escaped across the border to Italy. Lev was invited to be Mussolini’s official biographer–until the Fascists too discovered his true origins. Under house arrest in the Amalfi cliff town of Positano, Lev wrote his last book. He contracted Reynard’s disease, a condition that affects blood flow to extremities such as fingers and toes. He died at the age of 36 due to complications with gangrene.

Until the publication of The Orientalist, his story has been shrouded in mystery. It is about time Lev reclaimed his old heritage to go with the new one he created for himself.

I am glad to find this much background information on the history of Baku and the possible identity of the author of "Nino and Ali". I have just completed a reading of the text in English.
It became a concern for me that the author appeared to have a Muslim name yet made mistake after mistake in representing the religion. It is possible that some of the items (like thefather's prenuptial advice) are part of Shiite or folk practices and could therefore be excused as a particular abberation of the localeand the time. However the real giveaway: that the author lacksknowledgeof Islam is in the Mickey Mouse version of prayer during Nino's labour. The right words and the right postures and stances but shuffled into bizarre nonsense.
I don't know enough about Lev Nussimbaum to know whether his "conversion" to Islam was a deep or superficial one. It seems that he might have been enough of an opportunist to use Islam as a cover, rather than a core, of his life. All I can say is that the writer of "Nino and Ali" is mischievious or misleading or ignorant regarding Islam and this is a blot on a book that has much to teach us about the Caspian region and about the mores of Nazi Germany.
I think it is a book that quietly warns against another war, although who saw one coming in 1937 when Time magazine was announcing Hitler as Man of the Year?

Dear Anonymous, reading the book as an Azerbaijani I did not see any problem. The basic knowledge on the Islam would be normal as not everyone lived in Baku back in those times were aware of religious details. Baku used to be and stays very multi-cultural, broad and rich in culture and religion.

Lets also not forget that Nussaimbaum stays as a conspiracy theory as nobody knows exactly who was the author.